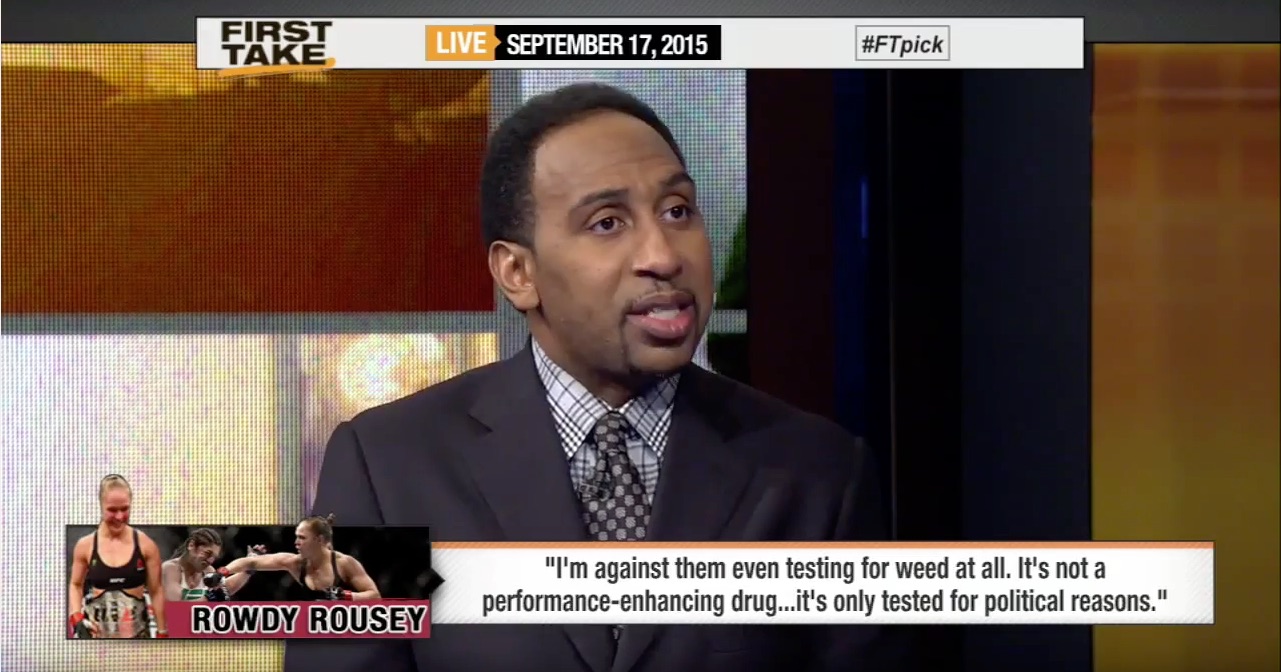 Stephen A. Smith does not like when athletes smoke marijuana. He does not like it one bit. Not one bit! Lemme tell you something, Skip—

(Sorry, I got carried away. But seriously, not one bit.)

This week on ESPN2’s First Take, Smith went off on MMA fighter Nick Diaz after he was suspended for five years for failing another test for marijuana, doubling down his ire toward international superstar Ronda Rousey for her defense of Diaz.

Smith is right. “The reality” is that Diaz tested positive when he knew it was against the rules. The rest of Smith’s rant, however, is all over the joint—er, place—when it comes to his feelings on weed.

First, he suggested Rousey’s defense of Diaz implicates her, saying, “according to how she sounds, she may have puffed and passed on a few occasions, for all we know. We don’t know.”

You are right about that one, Stephen A. You do not know.

“At the end of the day,” Stephen A. continued, “it does not matter, because you didn’t test positive.”

Let’s stop there. This is a man who has been on record like 420 times that “the weeeeeeed” is awful and athletes are putting their careers in jeopardy by sparking up, but excused Rousey this week because she hasn’t gotten caught yet. Don’t be a dope—er, fool—Stephen A.! That logic flies in the face of what you said next.

“You also have to understand that in our society, there are people who are making arguments that marijuana is a gateway drug. It serves the purpose of facilitating use of stronger drugs down the line, which can very well inhibit the progress of our citizens in a relatively civilized society.”

Stephen A., bud, let me be blunt. There is a chronic misconception that smoking pot is a gateway drug. 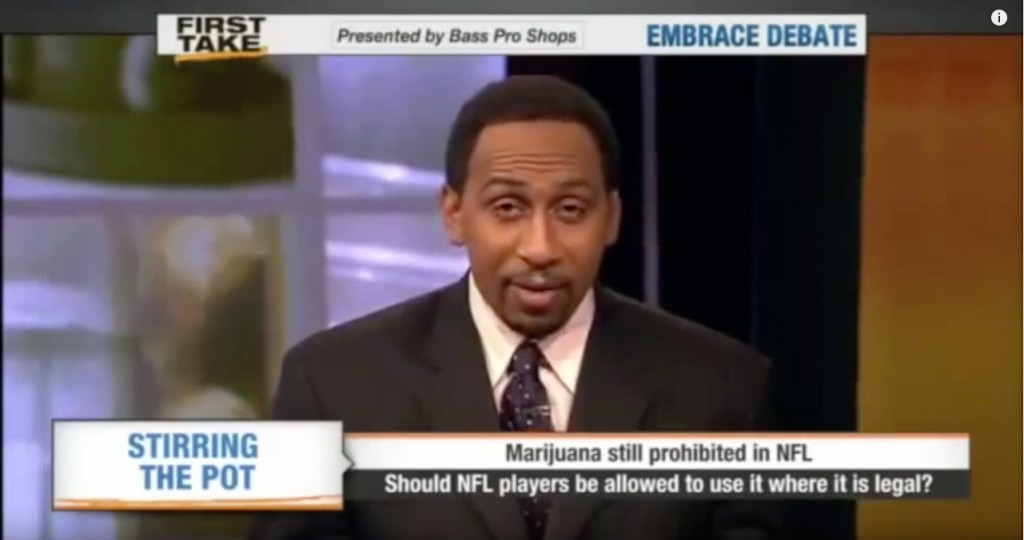 Your blazing hot toke—er, take—is making me bug out, man. Despite what some presidential candidates may be saying—Stephen A.’s gateway drug comment came the morning after a conversation about marijuana as a gateway made headlines at the CNN GOP debate—it’s been pretty widely documented that marijuana is not a gateway drug. You’d have to be stuck in some dank weeds or high on a reefer something for the last 20 years, because that logic is all smoke and no fire, KemoSabe.

What’s wacky is that Stephen A. didn’t say “he” considers marijuana to be a gateway drug, just that “in our society, there are people” making that argument.

Either that’s clever talking-head speak in case he’s called out (like here) or the man is merely trying to help by sharing the information that other people, who are not him despite the fact he made no effort to refute the assertion he used to further admonish pot smoking athletes, consider marijuana to be a gateway drug. He’s just trying to help!

Only, again, he (or whoever) is wrong. Take this from the National Institute on Drug Abuse:

[M]ost people who use marijuana do not go on to use other, “harder” substances. Also, cross-sensitization is not unique to marijuana. Alcohol and nicotine also prime the brain for a heightened response to other drugs and are, like marijuana, also typically used before a person progresses to other, more harmful substances.

Most marijuana users never use any other illegal drug and the vast majority of those who do try another drug never become addicted or go on to have associated problems. Indeed, for the large majority of people, marijuana is a terminus rather than a so-called gateway drug. New evidence suggests that marijuana can function as an “exit drug” helping people reduce or eliminate their use of more harmful drugs by easing withdrawal symptoms.

Or this from FactCheck.org in April 2015 about the idea of correlation without causation:

Though studies of large populations of people have indeed found that those who smoke marijuana are more likely to use other drugs, these studies show a correlation without showing causation — a commonly misunderstood phenomenon in science. In short, just because marijuana smokers might be more likely to later use, say, cocaine, does not imply that using marijuana causes one to use cocaine.

Or maybe this 2009 article from StoptheDrugWar.org that looks at a 1999 study stating, “There is no conclusive evidence that the drug effects of marijuana are causally linked to the subsequent abuse of other illicit drugs” and a 2006 study that spent 12 years tracking subjects and their drug use:

This evidence supports what’s known as the common liability model, an emerging theory that states the likelihood that someone will transition to the use of illegal drugs is determined not by the preceding use of a particular drug but instead by the user’s individual tendencies and environmental circumstances.

It’s not marijuana that’s a gateway drug; it’s circumstance. It’s friends and family and exposure to any drugs that leads someone to do harder drugs, whether they be professional athletes or regular citizens.

The thing is, it’s fun for Stephen A. to go off on rant every time a player gets popped for failing a drug test, screaming “stay off the weeeeeeeed” like it’s his latest catch phrase ESPN’s going to make into a bumper sticker to promote its latest debate embracing initiative. Because having an actual adult conversation is too hard for some people who would rather just scream and yell.

Yes, smoking marijuana is against the rules in every sport in America. Yes, Stephen A. is right that people like Diaz need to be punished for breaking those rules. But ignoring the larger conversation our sentiments on marijuana use in this country have evolved—it’s 2015, not the early 1990s—and continuing to perpetuate the false notion that marijuana is a “gateway drug” creates more of an issue, and a larger divide, than some athletes smoking a little weed to unwind ever will.

The above exchange between NFL star Ryan Clark and the First Take crew from last year shows exactly that problem. Listen to the first two minutes. Clark explains in rational detail why NFL players find the need to smoke weed. It’s reasoned, it’s reasonable and in no way does Clark suggest NFL players are just being lazy burnouts on the couch. Clark went so far as to say that smoking pot might curtail the use of harder drugs like prescription painkillers, which has been a huge issue in the NFL in the past. It all makes perfect sense, if you take the time to listen.

Now skip forward to Stephen A.’s response. (It’s at the 2:20 mark if the clip below doesn’t jump there.)

That’s a man who is in no way interested in having a rational conversation about marijuana use. He just wants to yell about young men being irresponsible because his job is to scream get off my grass—er, lawn— and collect a healthy paycheck in the process.

That’s the debate-embracing best of Stephen A Smith. Only, back in 2013, it was the opposite. Just two years ago, Stephen A. was okay with marijuana use in states where it’s legal.

Now my head is spinning. Is weed a gateway drug or not? Should players “stay off the weeeeeeeeeed” or should that just be for those who don’t play for the Broncos and Seahawks? If an MMA fight is in Denver, is failing a drug test okay, because it’s legal there, even if it’s against the rules of his sport?

I’m spacing out. And I’m kinda hungry now too. Aren’t you hungry, man? Let’s make a deal. I’ll get nachos, you watch a bunch more clips of Stephen A. yelling about weed. Puff every time he yells. Pass every time he doesn’t. Just make sure you’re holding first.