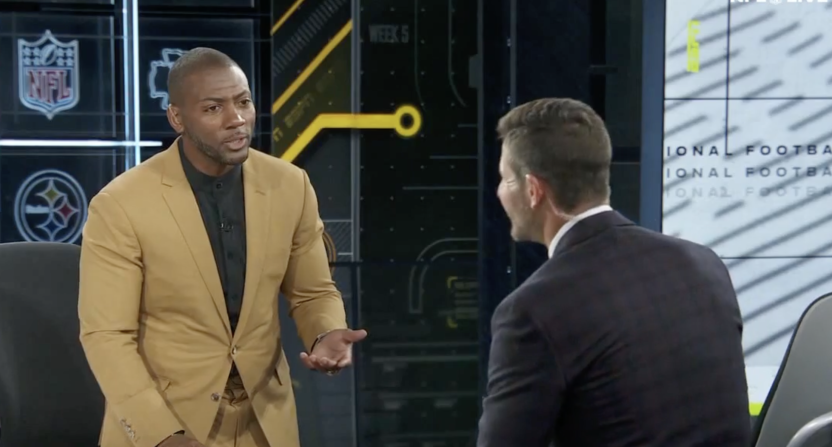 Dan Orlovsky is a weird dude. He has some weird opinions. He says weird things about food. And he makes some weird decisions when it comes to fashion. Sports fans were reminded of all this on Tuesday during a brief drama surrounding whether or not Ryan Clark would be able to find some cufflinks laying around anywhere at ESPN.

Our ESPN fashion nightmare begins when Clark took to Twitter in a desperate plea to track down some cufflinks.

Does anyone working at ESPN today have cuff links? I didn’t know my shirt needed them, I don’t have a rental, and have Ubered two places that don’t sell them. Can’t miss NFL Live searching Southington for them.

Many of Clark’s colleagues jumped in with quick fixes and recommendations.

“Go to the kitchen and get them to give you 2 twist ties used to keep the plastic bags around bread closed,” Robert Griffin III responded. “Gotta be thrifty in times of need.”

“There’s a tuxedo place about a mile away from the studio. It came in clutch for me,” said Emmanual Acho. “Or hit the men’s warehouse in Hartford.”

We also learned a little bit about the fashion perks, or lack thereof, at ESPN compared to some of their network counterparts.

Dang, NFL Network has one

Also within the responses were people saying that if Clark needed some fast fashion, he should turn to Orlovsky, who knows exactly where there might be some extra clothing items laying around.

Or be like @danorlovsky7 and take it from the lost and found.

I’ll have Dan check lost and found for you. He’s had some success there…

We were curious to know why so many people immediately thought of Dan when they thought about the lost and found. We found our answer in an NFL Live segment from earlier this month when Laura Rutledge put Orlovsky on blast and called him out for raiding the ESPN lost and found rack for clothing.

“Let me tell you about Dan’s jacket real fast, said Rutledge. “There was a lost and found rack in the ESPN green room. A jacket that had been left there for maybe years. And Dan started looking through the rack. He said ‘This is kinda nice.’ So whoever you are, ESPN employee who lost your jacket, Dan is now wearing it.”

After Dan tried to explain that there was a note saying that the garment was fair game after a certain date, Clark incredulously asked him if he washed the coat before putting it on, to which Rutledge confirmed he did not.

“Dan, that is disgusting,” said Clark. “You won’t eat fried chicken but you’ll put on an old lost and found dirty jacket?”

To his credit, Orlovsky had some fun with this during a stint on First Take soon after.

“You look like you got your clothes from the lost and found today,” Orlovsky joked with Molly Qerim.

Clark’s drama ended well with an assist from David Lloyd, though it’s unclear if that involved a stop at the ESPN lost and found. It also leaves us wondering what other essential items are hanging on those racks, just waiting for someone (See: Orlovsky, Dan) to snap them up before their next studio appearance.