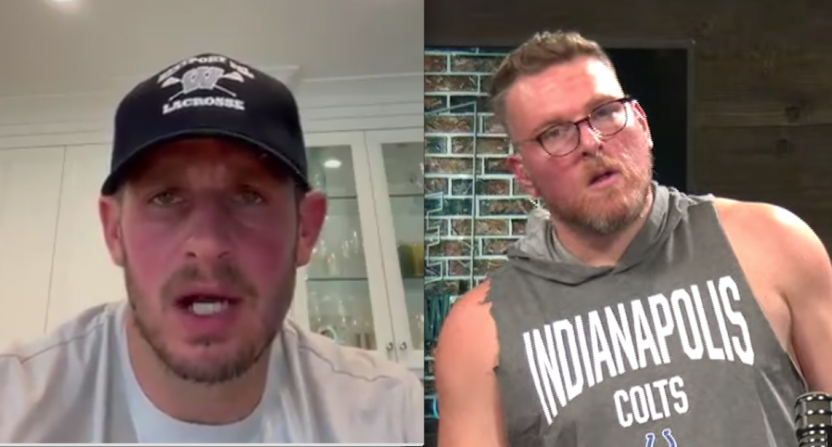 Yesterday, ESPN analyst Dan Orlovsky kicked over a hornet’s nest (which he would call a “firestorm”) while appearing on The Pat McAfee Show. For those catching up, video and transcription below of Orlovsky explaining the perception that Justin Fields was falling in the draft.

I love a good @danorlovsky7 roast sesh as much as anybody BUT..

I think folks are missing that he was answering my question about “Why the narrative has changed about Fields so much?”

He very assertively said “These are not my opinions”

He then went on to give a potential why pic.twitter.com/Wud0ve4tcI

“One, I have heard that he is a last-guy-in, first-guy-out type of quarterback. Like, not the maniacal work ethic. I’ve even heard it compared to Justin Herbert, where it was like, dude, when Justin Herbert showed up, he was like a psychopath when it came to working and get ready for the draft. Or even at school, like, “Give me more, I want to work non-stop.” And I’ve heard that there are issues with Justin Fields’ work ethic.

1- There is a longstanding history of black quarterbacks having these same negative traits attached to them anonymously before the draft.

It always appears that certain QBs are labeled as lazy or lacking a great work ethic while others are lauded for their IQ & mental capacities. It would be nice if we wouldn’t routinely affix stereotypes to ONLY Black QBs. Non-Black QBs NEVER get these labels on TV. Weird, right? https://t.co/CZ7exbvjAc

2- There have been literally zero whispers about Fields and work ethic and lack of wanting to be great inside the Ohio State community. I say this as an OSU fan plugged in with a lot of the Ohio State writers who often gossip to themselves about things they wouldn’t or cannot publish but know with absolute certainty. For instance knowing what players would be out for Covid was regularly known this past season well in advance of when the school announced it on gameday. Likewise in a pre-pandemic world, OSU writers would regularly be happy to tell you all of the off-the-field chatter about the team if you picked up a round of drinks at a bar.

That’s a long ways of saying for these very negative and very tired stereotypes now being attributed to Fields  somehow bypassing the entire Ohio State media ecosystem as well as more senior draft analysts, tripped an awful lot of people’s bullshit wire. McAfee’s face during Orlovsky’s comments pretty much say it all. 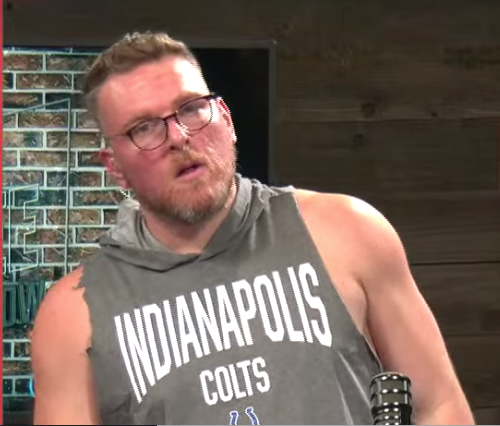 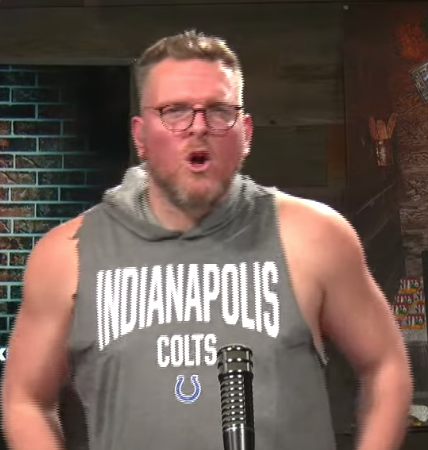 Others, not as personally invested in defending the honor of Fields, shared the same skepticism.

Justin Fields was the highest-profile Big Ten player to push for last season to happen, when he could have opted out and been a top-5 pick.

He later played through a brutal injury to beat Clemson.

Spare me on this cliché crap. https://t.co/Pf2IPSI9wE

Justin Fields was one of the loudest advocates for playing a 2020 CFB season, even though he would've 100% been the #2 pick in the draft if it had been canceled
Justin Fields refused to come out of OSU's playoff game when he suffered a vicious hip injury
what are we doing here https://t.co/84BV74iQ1J

Hi, PSU fan and avowed Ohio State hater here. I watched this guy get broken in half by Clemson and then come back into the game and throw 6 TDs vs one of CFB's best defenses with what had to be an extremely painful rib injury, but yeah you've got to really question his drive.

With Orlovsky’s comments catching fire for all the wrong reasons, an emotional Orlovsky took to twitter and delivered a hybrid explanation and retraction, but one notably missing any type of apology.

In regards to Fields….?? pic.twitter.com/9VgIRyShrB

“That forced me to do even more digging over the last 24 hours and I’ve had two conversations that I want to put out there to kind of clarify the situation or put more out there about the situation. One conversation I had is with an offensive coach at Ohio State and he said ‘Tell them that’s absolutely not true. That Justin Fields work ethic is  spectacular.  That he is a guy who has great football IQ and he’s always studying tape.’

And then the second conversation I had is with John Beck who has kind of trained Justin as he’s headed into his pro day. John’s had a really positive experience saying like this guy is always working incredibly hard on the field and even after we’re done doing on field drills he’s the guy who wants to stay after and work on different footwork or different throws and he’s had a very good experience. So the reality is that is that I have heard those things from teams um and they might feel that way and this is also a season where teams  are tying to say things to potentially get a guy to drop to them and so i just wanted to clarify and put it out there that listen over the last 24 hours and more digging that it seems and sounds like Justin Fields  work ethic is fantastic and that’s coming from two people who have worked directly close with him”

Where to start here?

Orlovsky admits making a mistake, but there really isn’t much in way of an apology to Fields or listeners for repeating tired racially-tinged stereotypes. If Orlovsky did indeed get fed shitty information with questionable intent, where is the accountability for not having checked it, or at least for not adding a disclaimer that he’s skeptical about the information? He’s not an anonymous poster on a recruiting message board. He’s a high-profile ESPN personality. And while the explanation was somewhat helpful, it doesn’t really get much to the heart of the matter of how this happened and what Orlovsky could have done better.

Another issue in play here is that for many personalities at ESPN, there is a push for more generalization and less actual expertise. Orlovsky appears on NFL Live, Get Up!, and tons of other ESPN NFL centric platforms. He also calls college football games. He’s now also doubling as a draft expert and reporter. Studio, booth, college, and NFL…it’s a lot of ground to cover. This is lauded by the networks and by agents. Exposure and diverse usage is good for your brand!  Do it all! But the reality of being a massively-exposed generalist is that the actual content produced is often diluted and over time becomes recycled original opinion coated with some personal touch.

Additionally Orlovsky’s comments yesterday weren’t the first time he seemed to ding Fields draft status. Orlovsky called Ohio State’s December 5th 52-12 win against Michigan State which saw Fields rush for over 100 yards and two touchdowns while going 17 of 24 with two additional touchdowns and no interceptions. What stood out at the time is Orlovsky oddly spent large chunks of the game advocating that Fields had some issues and wasn’t worthy of the second overall pick, which at that point in the season wasn’t exactly a very firm placement for him at all.

I have never missed Joel Klatt more than I have as Dan Orlovsky enters hour two of his Justin Fields should not be picked number 2 overall podcast.

These comments coupled with yesterday’s comments certainly raise an eyebrow, although Orlovsky likes to point to a lot of various differing stances he’s tweeted or said about Fields over the past year that are often inconsistent and clashing. Like many folks in sports media, there seems to be lack of any consistency in terms of opinion here on Fields other than there is a quantity of takes whenever one is needed.

Another thing to consider is that Orlovsky’s self-inflicted wound here didn’t actually come on an ESPN platform. In fact, it came on a platform that ESPN had only until recently had blocked talent from going onto. Later in the day, Orlovsky did a few more ESPN appearances and was asked about the quarterbacks and avoided stepping onto the rake in those instances.

This is a broader issue for ESPN when talent gets more controversial and provocative when on more niche platforms like non-ESPN radio shows and podcasts. They say things they wouldn’t normally say and will attempt to act a little cooler in order to blend in a bit better. It’s akin to me bobbing my head to a song I’ve never heard and laughing at jokes I can’t actually hear while out at a bar.

When you work at a ESPN or Fox, you love nothing more to show you’re not just a gumball in a gumball machine and you are indeed cool and hip or whatever traits a certain show and audience shares. Often this is fine and often it goes unnoticed, but every once in awhile it gets people in trouble. In this case, Orlovsky shared something he potentially knew wasn’t kosher on a non-ESPN platform. Ultimately it surfaced on social media, and regardless of where it was said and how he framed it, he couldn’t hide from the low journalistic bar and the dicey origin of where these comments came from.

The unfortunate truth is that we’ll probably be at this same point in time next year with similar flimsy comments made about another black QB. However I’m hoping this incident will reinforce some better practices for sports media going forward which would include:

1- You have to be on absolutely rock solid footing if you’re going to put out juicy draft fodder that fits the mold of negative racially-tinged stereotypes.

2- Fact-check your sources when you hear something sensational and controversial that is unreported, and do so before repeating it.

3- Explain to audiences the prevalence of draft misinformation.

???
Absolutely RIDICULOUS.
Even if YOU aren’t saying it…
to pass that along from “people in the know” is reckless and absurd!! Embarrassing!! https://t.co/r0RFSr1B6y

4- Hold your sources accountable for giving you bad info, or just eliminate conversing with them.

5- Be consistent of your editorial judgements, regardless if you’re on a show hosted with people in fancy clothes vs a dude a wearing a cutoff hoodie.

6- Say you’re sorry when you fucked up.

Orlovsky went 0-6 yesterday and today. I hope he can do better because as he’s seen in Detroit, going 0-7 often finds you out of a job.