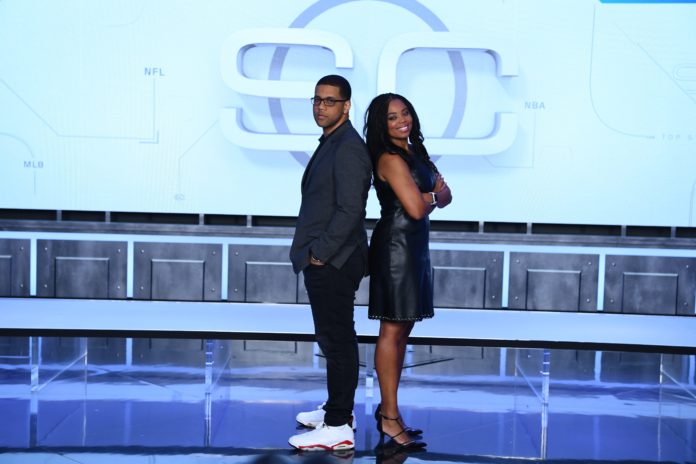 It’s interesting when one of the key goals for a television show is about its performance beyond television and beyond its airtime, but that seems apt given our modern world. ESPN senior vice president of SportsCenter and news Rob King has set that as a target for the forthcoming SC6, the new 6 p.m. Eastern edition of SportsCenter that will feature former His and Hers co-hosts Michael Smith and Jemele Hill. King spoke to ESPN Front Row’s Molly Mita for a piece published Thursday, and part of what he said about how he wants this show to resonate beyond its televised airtime seems especially important:

The cool thing about this show is that we’ve actually started from scratch in terms of thinking of all the ways in which fans can touch “The Six.” There’s a show meeting at noon and from that show meeting up until the show starts at six o’clock on television, we’ll be using social platforms and digital platforms to give people glimpses into how we’re building ideas and to introduce unique content to certain social platforms to listen to fans who are on those social platforms and the topics they’re interested in. So by the time we get into the control room and start doing a show we will have already started a conversation with the audience that will continue through the live games.

Michael and Jemele combined have more than 900,000 followers on social platforms so you match that up with the breadth of SportsCenter’s audience across Twitter, Facebook, Snapchat, Instagram and you’re talking about a huge scale on which Michael and Jemele, their audiences, and sports fans, in general, can talk to each other.

In many ways, we view what’s going to happen in the social and digital space is as important as what happens from 6 p.m.-6:59 p.m. on television. In the end, that will be a watershed moment. In the past, we’ve embraced social and digital but we’ve built them largely as appendages; in this case, they live at the center of how we think of touching fans.

That seems to have some promise, especially given how fans are consuming sports content these days. As we’ve often discussed on this site, there seems to be less and less interest in straight news and highlights, and both ESPN and Fox are adapting to that. Fox went with the drastic move of killing the news-and-highlights version of Fox Sports Live and turning it into more of a comedy-focused late night show, while ESPN has focused instead on making highly identifiable and individual versions of SportsCenter, from Scott Van Pelt’s show to SportsCenter A.M. and more. A personality-focused approach like they’ve taken with Van Pelt seems to be the goal for this new Smith and Hill show, and bringing social and digital into that makes a lot of sense.

Pre-show discussions of what’s to come might help build the audience, too. Maybe if people see Hill and Smith teasing some ideas on Twitter or in online segments during the day, they might be more motivated to turn on the show to see the full version when they get home. Of course, this does mean extra work for everyone involved; doing one hour of live TV a day is tricky enough, and this focus on trying to create more digital and social content won’t be easy. It feels like a good idea, though, and one that fits the modern landscape. Also fitting the current landscape are King’s thoughts on how he wants this to be more conversational than strictly reporting the news:

This show will be unique because it is an opportunity to look in on a conversation among close friends, colleagues and the people who they bring into their orbit by virtue of the topics they choose and the interests they have. Since we launched the midnight show with Scott Van Pelt, it’s been really clear that SportsCenter can be distinguished when it’s built around unique personalities and unique conceits, especially those ideas, personalities and conceits that work for specific audiences. The success of Scott at midnight has emboldened us to think about, “How do you feel when you wake up in the morning?” which is what we built SportsCenter:AM around. It definitely makes us think about that happy-hour time of day where the conversation around sports is really a conversation more than a moment to report something.

But I should also say that Michael and Jemele are extremely capable of reporting news as it breaks and as it happens so we have high-level confidence there. I think people will also see that the music, the set design, the guest list and the way in which people sit on the set will all communicate a very different vibe around SportsCenter and it should be really cool.

This is interesting, because in some ways it seems to be trying to walk the line between a debate show and the traditional SportsCenter. Smith and Hill certainly have backgrounds in opinion programming too (in addition to their journalism and reporting backgrounds, which King also notes) from Numbers Never Lie and its eventual evolution into His and Hers, and bringing some of that to the 6 p.m. SportsCenter may not be a bad idea (especially given how hard it is to first break anything on TV these days; plugged-in sports fans have already seen the stories, so a more in-depth discussion of them may be more interesting than a just the facts approach).

However, everyone involved will need to take care to keep this informative rather than just opinionated, and conversational rather than just loud debate, or they’ll run the risk of alienating other people in the process. It sounds like this will retain a lot of the SportsCenter DNA, just with some twists, and that’s promising, but the question is how it will play out. We’ll have to wait and see there, but King’s stated goals for this SC 6 are certainly notable, and they’re quite different than what we’ve seen in the past.

2 thoughts on “Rob King wants SC6 with Michael Smith and Jemele Hill to be conversational, and go beyond TV”