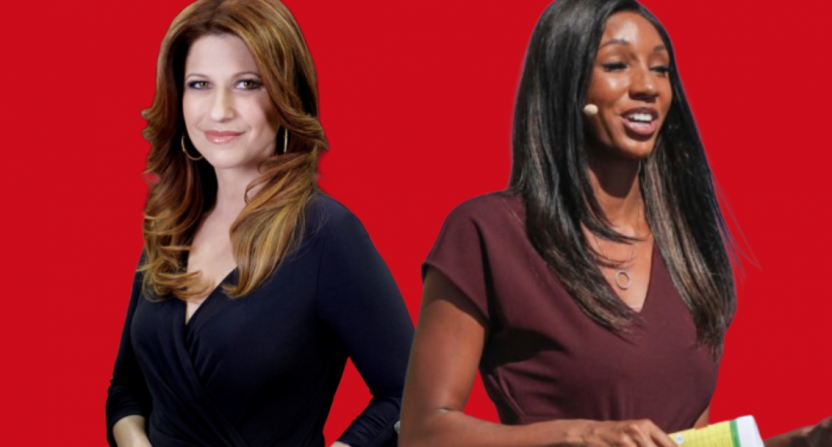 Being Black in America means constantly assessing and re-assessing your surroundings. That includes not only strangers but also friends, relatives, and coworkers. It’s sad. It’s exhausting. It’s also a fact of life for most African Americans.

You never know who might be out to belittle you, undermine you, or get you. Today’s perceived ally can quickly become tomorrow’s known adversary.

This brings us to the New York Times bombshell article on Rachel Nichols’ diversity comments about her ESPN colleague Maria Taylor. In a leaked video, Nichols is caught complaining about Taylor’s elevation over her to host the NBA Finals.

As a refresher, here is a jarring audio quote, courtesy of the New York Times:

The Times reported that Nichols tried to apologize to Taylor via texts and phone calls. Taylor hasn’t responded. On Monday, Nichols opened The Jump with an on-air apology to Taylor and others at ESPN.

This was the bare minimum. It feels inauthentic, like a carefully crafted statement approved by lawyers. ESPN wants this kerfuffle out of the news cycle and with the NBA Finals starting, our attention span will shift.

But even if Taylor publicly accepts this apology, you get the feeling that this story is going to linger. Especially since Taylor’s contract with the worldwide leader is set to expire on July 20.

Back to Nichols’s original comments.

It takes a certain amount of hubris and lack of awareness to say that. Many of us have been passed up for promotions. Maybe we’ve been treated unfairly. If Nichols had legitimate gripes or if this were simply a personality conflict, this story would have played out differently: two highly qualified media stars vying for one position. Someone is going to be disappointed. Happens every day in corporate America.

Part of being a good teammate means standing up for each other. Being as supportive as possible, both publicly and privately. Why? Because gossip and resentment often have a way of getting back to people. And when you’re talking about an African American co-worker, you better be sure not to make disparaging remarks centered on race.

Once you’ve sideswiped a colleague by implicitly or explicitly saying they got the job that you wanted because of their skin color, that’s not only obviously wrong but also harmful. It’s already tough enough on Black people in the sports media business. Now you’ve thrown that Molotov cocktail into the conversation.

That damage is not easily repaired, and your Black coworkers will never look at you the same way again.

According to the New York Times, Nichols said she was frustrated and was “unloading to a friend about ESPN’s process, not about Maria.” But she added, “My own intentions in that conversation, and the opinion of those in charge at ESPN, are not the sum of what matters here — if Maria felt the conversation was upsetting, then it was, and I was the cause of that for her.”

Can’t blame Taylor for ghosting Nichols. Most people have no idea how demeaning this all is. Some might say that Taylor should quickly accept this mea culpa. Those who do probably aren’t Black. They likely have no idea what it’s like to be a minority in a workplace where your peers question your qualifications and credentials. Like you won a racial quota lottery.

The feeling of having to prove yourself worthy of a job that you already have is a burden we are forced to carry.

A long time ago, at a former place of employment, there was a time when I was the only African American in my department. Later, I found out that a coworker had referred to me as strictly a diversity hire. I was angry but I was also young. I never complained to my boss or confronted the man who I strongly suspected was a racist. It was my first job out of college and thought at the time that speaking out would negatively impact my career.

I no longer work for that company and that man has passed away. However, the sting still lingers. In hindsight, I can see how his comments affected my confidence and contributed to Imposter Syndrome.

Generally, my coworkers have been great, but never underestimate the power of one person to chip away at your self-esteem.

Fortunately for Taylor, she is immensely talented and appears to have a strong support system. (Credit Adrian Wojnarowski for reportedly calling out Nichols as “a bad teammate.”) But many aren’t as fortunate.

This should serve as a reminder to treat your African American coworkers better. Being a true ally in corporate America often means speaking out in support of Black people when something is not right. Routinely ask Black colleagues if they are doing OK.

Be sensitive. Be a great teammate.

Your voice carries weight and makes the burden on your African American coworkers a little lighter.