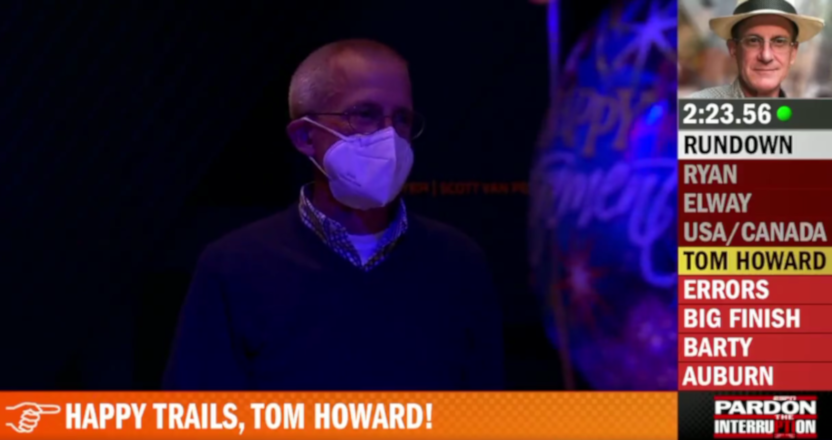 One of the longest-tenured figures in ESPN’s studio show lineup is moving on. That would be Tom Howard, who’s directed Pardon The Interruption since its October 2001 beginnings. Hosts Tony Kornheiser and Mike Wilbon paid tribute to Howard on his final show Monday. Here’s that clip, via ESPN PR’s Bill Hofheimer:

Tony Kornheiser & @RealMikeWilbon with a great tribute tonight on @PTI to the show's longtime director Tom Howard, who is retiring after 20 years.

A selected bit of Kornheiser’s tribute there: “Bonus happy trails to our director, Tom Howard. Tom has been the man who’s called the shots in the control room since Day 1, and now he’s retiring. He’s younger than I am, so what the hell am I still doing here? For more than 20 years, Tom has taken all the pieces to our daily puzzle and made them look and sound great on the air. We are indebted for everything he’s done to make this show what it’s been, and we’re keeping our fingers crossed that it doesn’t all go to hell without him.”

Howard spoke a bit about his PTI history in an ESPN Front Row Q+A with Hofheimer on 20 years of the show last October:

What do you remember most from that first year of PTI in 2001?

A whole bunch of people from various backgrounds were thrown into this mix. Nobody really knew each other, with very few exceptions, and we all had to come together and make the show work. It was truly a team effort and, at times, a struggle, but it did gel as we went along.

What’s your favorite memory from working on the show?

[Executive producer] Erik [Rydholm] came to me one day and said, [coordinating producer] Matt Kelliher has an idea for a new game, “What’s the Word?” but they didn’t really know how they wanted it executed. He essentially turned that part over to me. So I came up with a mix of Jeopardy and Password, ran it by Erik, and “What’s The Word?” was born – and it remains a staple of our show. There were so many game ideas at the time, and all of them were fun to work on.

Is there something unique about directing PTI compared to other shows, in terms of capturing the interaction between Kornheiser and Wilbon?

Unlike so many talking head shows, the energy and banter between the two, especially when on set together, is like a sporting event. You don’t know what’s going to happen because it’s unscripted for the most part. Learning the guys’ personalities, knowing what’s going to trigger a reaction, and catching it as it happens make cutting the show fun and fast-paced.

What are you most proud of in terms of PTI’s success?

Our three Emmys, and the fact that a show that wasn’t given a chance has lasted 20 years and is still the top-rated daily studio production on the network.

It’s nice to see this kind of salute for a long-time behind-the-scenes staffer. There are a ton of people at networks who put incredible amounts of work and effort into the programming without appearing on camera, so it’s great to see them occasionally get some on-air recognition. And Howard’s record with PTI certainly is impressive; that show has been popular and influential for an incredible amount of time. We wish Howard all the best in his retirement.