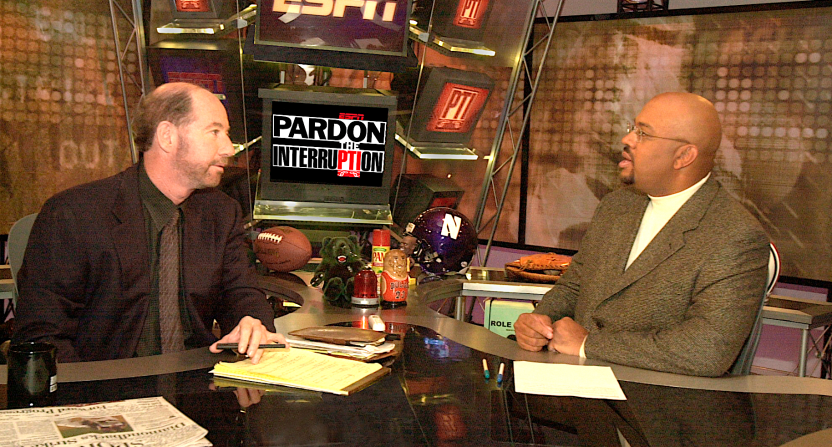 There’s a whole generation of ESPN viewers who remember a time when a show featuring two hosts sitting across a table from one another arguing about the sports stories of the day seemed like a fresh and fun piece of daily programming.

Pardon The Interruption (PTI) helped launch the sports debate show format that has become the bane of so many audience’s existences today. But we can still look back fondly and appreciate it for what it meant to watch Tony Kornheiser and Michael Wilbon playfully yell at each other and still feel something.

PTI officially came into our lives on October 22, 2001, and ESPN announced Thursday that it was commemorating the 20-year anniversary with a series of projects. That news might make you feel pretty old.

ESPN will celebrate 20 years of PTI with a one-hour special next Tuesday (7pm ET). Pumped for this. pic.twitter.com/BaXwkDkEJz

For instance, if you’re like me, PTI evokes a sensory reaction tied to the places where you watched it. Perhaps it was the background TV of choice while you were unwinding after work or school. Perhaps it was the silent show you kept your eyes on while running at the gym. Maybe it was simply the way that you consumed the sports news of the day back when you actually had to make an effort to do so.

PTI makes me think of my apartment in Hoboken, New Jersey. I was working from home and my television was basically on all day, cycling through an unhealthy cycle of SportsCenter, MTV’s TRL, sitcom reruns, and eventually PTI to wrap the workday up. My memory also amalgamated the time years later when, due to the show’s popularity, ESPN started peppering quick-hit PTI segments during SportsCenter, back when that was the network’s ultimate showcase (and something they started doing again last year).

Sometimes it’s hard to pinpoint the wheres and whens of how you watched PTI because it seemed so omnipresent and immemorial.

Thinking about all the dormitory cafeteria, happy hour bar and treadmill Ts I've watched this show on through the years. A staple. https://t.co/zLQaJFdYIm

It’s easy to look at Kornheiser and Wilbon and see them for the accumulation of things you know about them now. Kornheiser’s crotchety old guy routine ran thin years ago, especially thanks to a very strained stint on Monday Night Football, a failed sitcom you might have forgotten existed, and some unfortunate missteps along the way. Same for Wilbon, who made waves over insensitive comments about Sean Taylor and became more of a grumpy hot-take old man over time.

As with so many things in life, it was better before you knew all of those things and they were just two guys trying to out-yell one another about whether or not Kobe Bryant would ever live up to the hype. Ignorance is and always will be bliss.

Like SportsCenter, Bill Simmons, and so many things about ESPN and sports TV programming, the audience that came up watching and relying on PTI has mostly either moved on or grown up. Depending on how limited your ESPN viewing is these days it might even surprise you to know it’s still on the air, 5,000+ episodes later.

Unfortunately, you can draw a straight line from the success of PTI to the kinds of programs that so many sports fans turn their nose up at these days. If you’ve ever complained about First Take, Undisputed, Get Up!, or the rest of their ilk, you can thank your own appreciation for PTI for willing them into existence. Your own love and hate for ESPN and “embrace debate” programming is an ouroboros that never stops circling.

These days, the only times I watch a debate show on a sports network is when I’m in the dentist’s office waiting room or when it’s on mute at a TV in a bar. I scoff at the idea that anyone actually chooses to watch these shows and what it means about them. But that hate is ultimately reflected back at me. Because I used to schedule my whole day around a sports debate show. I used to DVR (remember that?) a sports debate show every day just to make sure I didn’t miss it. I counted on a sports debate show to help get me through my miserable day.

So, no, it’s not “same time tomorrow, knuckleheads” and it hasn’t been for a while. But thank you for what you were, PTI, even if I don’t like what came after.