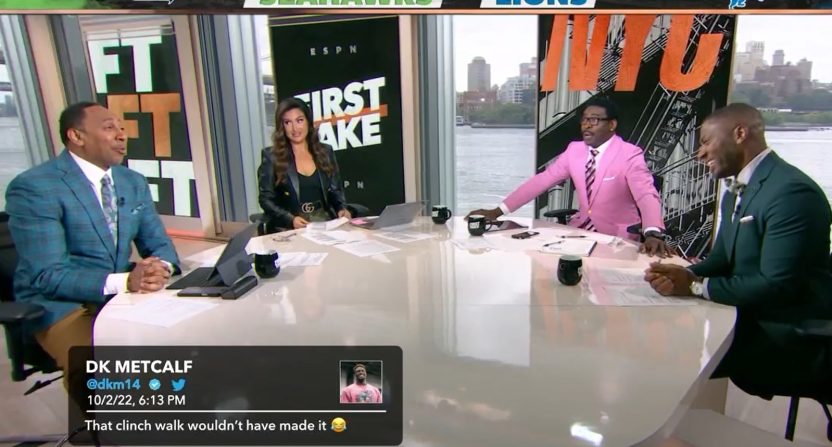 Molly Qerim is used to introducing difficult topics on First Take, but she hesitated a bit Monday morning when it was time to discuss DK Metcalf’s bathroom break.

Metcalf was carted off the field Sunday afternoon after the Seattle Seahawks wide receiver realized he reached a point of no return where walking to the bathroom was no longer an option. First Take used Metcalf’s close call as an opportunity to ask former players Michael Irvin and Ryan Clark if they ever found themselves in a similar situation, tasking Qerim with posing the question.

“Metcalf tweeted, ‘that clinch walk,’ I can’t even finish it,” Qerim said before she regained composure to continue the question. “’That clinch walk wouldn’t have made it’ with a crying laughing emoji. The question was, ‘can you relate to anything like this?’ And I feel embarrassed to ask.”

“We all can,” Stephen A. Smith interjected definitively.

Two minutes of laughter, locker room banter and potty talk proceeded to ensue between Smith, Irvin and Clark. The latter two claimed they never found themselves in a situation similar to Metcalf during a game.

“Usually my body liked to clear out before you get to the game,” Irvin explained. “God almighty that’s crazy!” he added of Metcalf.

“Could you imagine if you let it go in front of people in public?” Smith asked. “It don’t get more embarrassing than that. Hell no! If you need a ride, you need a ride!”

It may not get more embarrassing than that, but Qerim appeared to be embarrassed enough by the topic. Eagerly waiting for the segment to end, Qerim awkwardly sat in the middle of Smith, Irvin and Clark as they snickered the way nearly every NFL fans did when they stumbled on their first Metcalf headline Sunday afternoon.

“Ain’t no shame!” Smith declared. “Every human being got to go to the bathroom! We understand.”

There was, however, at least some shame at the First Take desk.

“I love this conversation,” Qerim chimed in sarcastically. “Really feeling like one of the guys. Really great…don’t even say anything to me.”