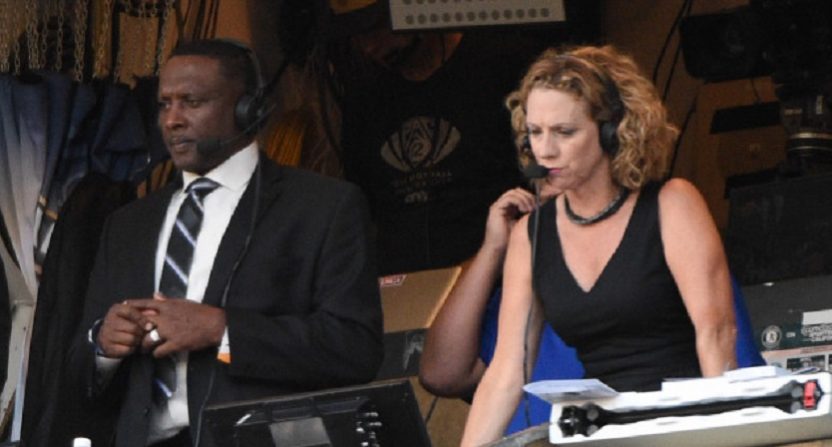 Last month Awful Announcing wrote about the strong possibility that Beth Mowins would call the Week 1 Monday Night Football doubleheader game for ESPN. That news seems to have been confirmed by SI’s Richard Deitsch this week with Mowins and new ESPN hire Rob Ryan reportedly getting the nod from the network to call the second half of the opening week doubleheader in Chargers-Broncos.

Mowins would be just the second woman after Gayle Sierens in 1987 to call an NFL game on television. And she would be the first woman to call a nationally televised game with ESPN’s Chargers-Broncos broadcast going around the country.

This move has been a long time coming and reading the tea leaves Mowins’ assignment could have been easily predicted. As we shared last month, ESPN John Skipper was asked by longtime NFL reporter Andrea Kremer last fall about a woman being in the broadcast booth for an NFL game and why it hadn’t happened yet. The pair had the following exchange where Skipper basically predicted it would happen and it was something ESPN was committed to.

Kremer:  I want to ask the boss man the question that I get asked all the time, and I know what my answer is, but I’m interested in hearing from you. What will it take for a woman to call play-by-play for an NFL game?

Skipper:  I think we’ll get there. We’re committed to it. We have women calling NBA games, women calling college football games. We expect and we look for opportunities to put women in the booth. We put Jessica Mendoza in the booth on Sunday.

Kremer:  But on NFL…

Skipper: We have not done NFL yet. We are very happy with our booth right now, we want to make that clear.

Kremer:  I’m not even saying for ESPN. It would only have to happen for the Q game at CBS. It wouldn’t be for ESPN, it would be for CBS or Fox.

Skipper: Andrea’s asking an important question. It is one of those things where we are moving people, we are making progress, that would be seen as there is really no limit now where we can expect to see women in the booth in an NFL game and that would be a good thing.

Consider it right place, right time for Mowins and ESPN. With Chris Berman now in emeritus mode and Trent Dilfer part of the network’s massive round of layoffs, there was an opening for this second MNF game. And to be quite honest, there’s nobody else in ESPN’s roster of play by play personnel that stands out as necessarily being passed over for the role. And with Mowins’ extensive work calling college football and calling NFL preseason games with the Oakland Raiders, she’s as qualified as anybody.

On the small scale, it’s the perfect opportunity for Mowins. Yes, we all know what women who work in sports have to deal with on a regular basis each and every day, especially on social media, and it sucks. Trolls will be out in full force. But considering that this game has often been staffed as a promotional vehicle for Mike & Mike with Mike Greenberg on play by play or an assignment for Berman on his way into retirement, this is the rare occasion when someone with significant play by play bonafides will be on the call. On paper, you would call it an upgrade, depending on how Rex Ryan turns out as an analyst (which will definitely be another storyline worth watching given he’s a high profile hire at a time when ESPN is slashing the talent payroll).

The larger story here though might be just how far ahead ESPN is than all of their other competitors when it comes to giving opportunities to women in broadcasting, specifically in the major professional sports. Most all of the recent breakthroughs that have come have happened through Bristol. Skipper’s commitment is real and it’s not just lip service.

Mowins’ assignment is groundbreaking when it comes to the NFL, but she now follows a couple other prominent individuals at ESPN. The network has had Doris Burke call NBA and college basketball games as a lead analyst for years and she’s been widely considered one of the best working today. Jessica Mendoza replaced Curt Schilling in a full-time capacity for Sunday Night Baseball and has done a fine job as well. Then there’s Sam Ponder, who will take over for Chris Berman as the host of Sunday NFL Countdown.

ESPN has led the way in this department inside and outside of the broadcast booth and Mowins’ assignment is just the latest example. ESPN’s work to pave the way should likewise encourage other networks to provide more opportunities to new voices.