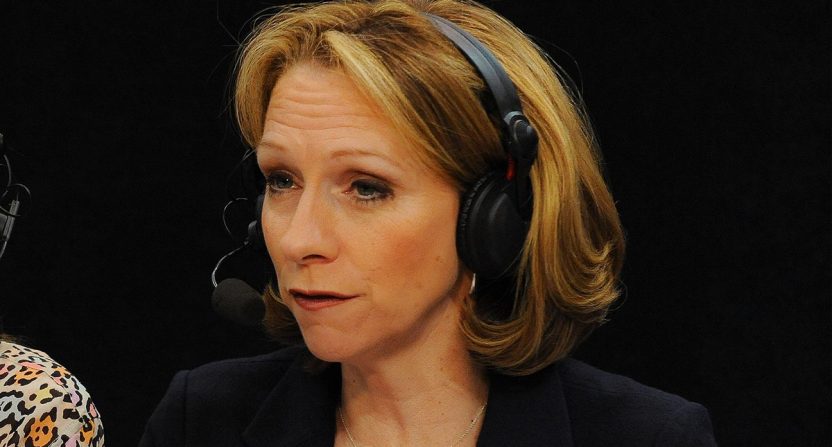 Here is one to keep an eye on. There are whispers — although nothing we can confirm at this time — that ESPN’s Beth Mowins may get the nod to announce the late-night opening weekend Monday Night Football game. If so, she’d be the first female announcer to do play-by-play for a NFL game on national television.

Mowins previously did play-by-play for a Raiders preseason game on a local broadcast in 2015. In 1987, Gayle Sierens did a regular season finale game for NBC which was a regional broadcast, but was unable to do any other games the following season, despite offers from NBC to call six more games. Her full-time employer (Tampa’s NBC affiliate) asked her not to pursue anymore play-by-play opportunities and continue as the station’s regular news anchor.

She recalled the situation in a 2009 interview with the New York Times:

“I used to say that I kicked down the door, but no one else came in,” Sierens said by telephone last week. “But I think that day is nearing. I really do.”

Eight years later, there seems to be some momentum building toward the return of a woman to the announcing booth. ESPN didn’t deny this possibility, instead opting to issue a statement saying “We will announce the commentators for the Monday Night Football doubleheader game later this offseason.”

As someone who covers sports media, this is a bit out of left field, but the more you think about it, the more it makes sense. You can actually argue it’s a perfect scenario for Mowins.

Chris Berman has called this second game for ages (and it’s been a shitshow, to be honest) but he’s transitioning into an emeritus role. The network recently announced the succession plan for his main gigs, but there was no announcement on the Monday Night game he  called annually.

With that in mind, the circumstances are pretty ideal for ESPN to make a little history here. Stodgy viewers who aren’t keen on having a female voice won’t have the luxury of saying Mowins calling a game would be a terrible downgrade, because you really can’t find anyone who thought Berman doing these games the last handful of years wasn’t terrible. That’s a long way of saying that the bar is definitely low, which takes a lot of heat off of Mowins and the network.

Plus, it’s only one game and it’s on national TV. This isn’t CBS or Fox who would likely have to go a full season or close to it. (Byes reduce the amount of announcers needed throughout the season.) That would lead to waves of both positive and negative feedback, with local fanbases reacting to having a female voice in the booth. It’s one game and it wouldn’t be a local broadcast. Hence, it wouldn’t be an ongoing story that bounced around the country with various local sports radio hot takers and callers providing their critiques.

Another thing to consider is nobody at ESPN really was lined up for this job. There is no natural successor. You could maybe make an argument for someone like Chris Fowler, Joe Tessitore or maybe even Dan Shulman would be an interesting choice, but those guys are pretty locked into other responsibilities in the fall. Steve Levy is another name that comes to mind, but what was an embarrassment of riches a few years ago for ESPN in terms of football play-by-play talent has quickly become a possible area of concern. The network has seen the departures of Brent Musburer, Mike Tirico, and Brad Nessler over the past few years.

That’s a long way of saying I don’t think anyone at ESPN or their agent is going to flip their shit and feel like they were passed over if this indeed comes to fruition.

One thing to keep an eye on will be the release of the NFL schedule. The second MNF game is usually a game on the West Coast and perhaps ESPN is nudging the NFL to slot a Raiders game here, so Mowins has a team she’s more familiar with. I imagine that might be a bit more complicated this year, given the Raiders and Chargers (someone they’ve played in this slot before) will be playing their first regular season games since announcing relocations. Hence, there could be the distraction of some fan protests. The Raiders have actually played in the second MNF game three times in the past eight years.

Interestingly enough, this may have been foreshadowed last November when Andrea Kremer (who was once considered for this herself) took the initiative to pose the question of women announcers doing NFL games on a panel that included John Skipper. Here is the video and transcription of the exchange.

Kremer:  I want to ask the boss man the question that I get asked all the time, and I know what my answer is, but I’m interested in hearing from you. What will it take for a woman to call play-by-play for an NFL game?

Skipper:  I think we’ll get there. We’re committed to it. We have women calling NBA games, women calling college football games. We expect and we look for opportunities to put women in the booth. We put Jessica Mendoza in the booth on Sunday.

Kremer:  But on NFL…

Skipper: We have not done NFL yet. We are very happy with our booth right now, we want to make that clear.

Kremer:  I’m not even saying for ESPN. It would only have to happen for the Q game at CBS. It wouldn’t be for ESPN, it would be for CBS or Fox.

Skipper: Andrea’s asking an important question. It is one of those things where we are moving people, we are making progress, that would be seen as there is really no limit now where we can expect to see women in the booth in an NFL game and that would be a good thing.

Kremer would go onto to pose the question to Big Ten commissioner Jim Delany, who farted around trying to answer such a substantive question from a fellow panelist. What I think is most interesting about this exchange is that at the time both Kremer and Skipper seemed to believe that Fox and CBS with their regional broadcasts were the likely networks to go down this road. Neither seemed to have the idea of the second MNF game as a possibility here.

We probably have a few months before we hear anything definitive on this, but it’s something to track as we get closer to the season. It’s hard to say how such a move would be received. College football fans have been lukewarm at best with Mowins in her duties calling college football games. Should she get the nod, it’s hard to imagine her not being an upgrade to Berman. Regardless, I think it’s almost a given there will be a heavy volume of complaints considering we’ll likely see a new voice in the booth calling a NFL game, whether it’s Mowins or someone else at ESPN.