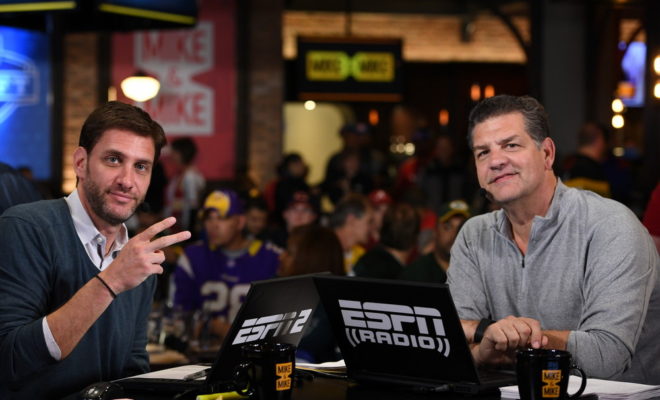 Mike Francesa’s shocking return to WFAN in New York might be right up there with Keith Olbermann’s “napalmed bridges” comeback at ESPN as the most improbable returns in the history of sports media. After more than a year of a prolonged retirement tour, Francesa left the WFAN airwaves in December 2017. It was just four months later that Francesa returned to those same airwaves in controversial fashion to reclaim his seat.

Francesa’s comeback hasn’t exactly been smooth sailing. The pope has been openly feuding with his once-former and, once again, current colleagues like Boomer Esiason. It also effectively buries the triumvirate of Chris Carlin, Maggie Gray, and Bart Scott before they could barely get their new show off the ground. It was reported that Francesa went over his own boss’ head at WFAN, going straight to corporate to get his job back. And he is also taking a hefty paycut to return to WFAN after flaunting all the opportunities that would supposedly come his way once he moved onto greener pastures.

But then on Tuesday, when Francesa hit the airwaves, it was as if nothing had ever changed. And the hard truth is that Francesa and WFAN are better together, through all of the drama, than they were apart. WFAN is better off with Francesa anchoring its lineup and Francesa is never going to have the same draw outside of New York than he will talking about the Yankees every day.

Is it time for ESPN to swallow hard and admit that the same just might be true for Mike & Mike? That the pair, and maybe more importantly all of ESPN’s platforms, are better off with them together than apart?

The situation carries a few eerie similarities. Francesa had a year-plus retirement tour at WFAN. Likewise, plans for Mike Greenberg to leave Mike & Mike for his own show had been percolating for well over a year before Get Up finally launched on ESPN. Like Francesa’s WFAN comeback, a Mike & Mike reunion would probably carry with it a little bit of awkwardness. Mike Golic himself even admitted to the tensions between the pair while the long, protracted breakup was playing out. A report in the New York Post even called the situation “poisonous.” But like Francesa returning to WFAN, a Mike & Mike reunion would probably benefit ESPN in the long run.

Few shows that ESPN have ever launched received the hype and promotion that Get Up enjoyed. The network has been looking for a “morning show” vibe for quite some time. It was even announced back in 2015 by ESPN that Mike & Mike would move to New York and crossover with Good Morning America before those plans were ultimately reversed. Then came the retooled SportsCenter AM, which took on a laid-back morning show feel with a larger cast and a more conversational tone. Now, ESPN has moved on to Get Up featuring Greenberg breaking away from Mike & Mike to partner with Michelle Beadle and Jalen Rose.

From an editorial and critical standpoint, Get Up probably accomplishes what ESPN is hoping for it to do. But from a ratings standpoint, Get Up has been a massive disappointment. With everything ESPN has invested into the program — a new New York studio and huge salaries to the tune of a reported $14.5 million — the fact that ratings have gone down from prior episodes of SportsCenter has to have ESPN seriously concerned. In its first week when interest should be at its peak, Get Up was down 24% from SportsCenter last year. There’s now even a Twitter account that tracks whether or not Get Up can reach 300,000 viewers every day.

Philosophically speaking, there is probably a larger conversation that needs to happen around whether or not a morning sports show is a winning idea. Maybe it’s just not something sports fans want and they’re fine with generic episodes of SportsCenter and radio simulcasts. Maybe Get Up would be fine with a rotating cast of ESPN personalities instead of highly-paid fixtures. Maybe nobody knows what actually works best and it will remain a mystery for the rest of time.

What isn’t a mystery is that ESPN’s AM situation is not in a better place than it was a year ago at this time. Get Up is struggling, Golic & Wingo is relegated to ESPNEWS on a regular basis, and ESPN is cannibalizing its own audience. If you were a fan of Mike & Mike, are you going to watch Get Up or Golic & Wingo? The fact that Mike & Mike are now competing against each other for the same viewers is only making the problem worse.

ESPN oracle Jim Miller has said the ramifications are serious if Get Up ultimately fails for ESPN and the show may have until next year’s Super Bowl to cultivate a following. Why wait until then, though? Mike & Mike may not have been everyone’s favorite program, but it was clearly one of ESPN’s most successful shows in company history.

Envision this scenario: what if Greenberg and Golic partnered up again on ESPN while one of ESPN’s many talented anchors like Adnan Virk or Cari Champion stepped into Greenberg’s chair on Get Up? Mike & Mike 2.0 can air on ESPN in a feel-good reunion story, restoring their audience on both television and radio. ESPN can then continue to experiment with Get Up as an alternative on ESPN2. Without Greenberg’s mega salary and the drama and intrigue surrounding the months of hype and attention, Get Up may even be better served in the long run with a bit of a lower profile.

A reshuffling done with finesse could be a win-win situation. If the individuals involved can swallow pride and put egos aside and ESPN is willing to do the same for what’s best for business, why not take a mulligan and try to put the band back together?