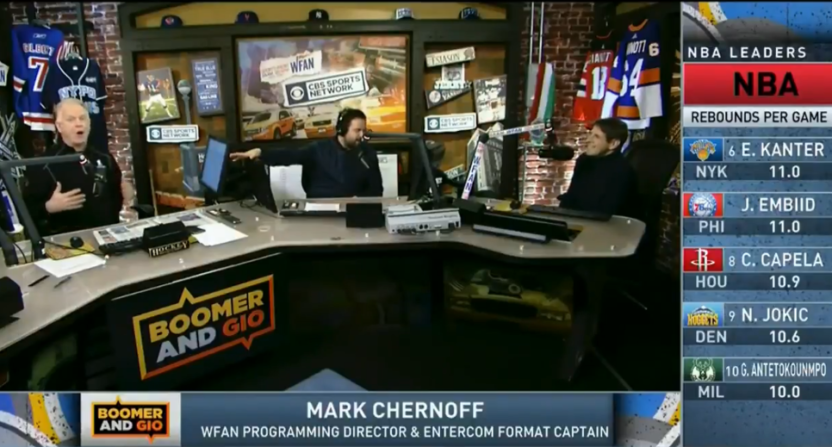 Mike Francesa hasn’t announced a new full-time job since his departure from WFAN last December, but he’s making waves with some guest appearances. Most recently, he went on MLB Network’s High Heat with former partner Chris “Mad Dog” Russo for a full hour last Wednesday, and the two finished up that segment with some shots at WFAN and at the new afternoon show (of Chris Carlin, Maggie Gray and Bart Scott). Those comments appear to have struck a nerve with some employees who are still at that station, particularly morning hosts Boomer Esiason and Gregg “Gio” Giannotti.

Here’s a clip from Funhouse, which shows the original Russo/Francesa comments from Wednesday, then shows Boomer and Gio blasting Francesa and Russo to WFAN vice president of programming Mark Chernoff (who was in-studio to discuss schedule adjustments after the Yankees’ home opener was snowed out):

Boomer & Gio tell #WFAN's program director Mark Chernoff that they didn't appreciate the "classless idiots" Mike and the Mad Dog ripping the new afternoon show. Mike and Dog's comments are at the beginning of this clip. pic.twitter.com/yRGtON4bgM

Here are the Russo and Francesa comments, as transcribed by Newsday‘s Neil Best:

At the end of that show, Russo said, “I’ll tell you right now, though, there’ll be nobody on WFAN before you know it. I guarantee it.”

Said Russo, “I shouldn’t have said it. Forgive me.”

Said Russo, laughing, “Boomer. Then they’ve got nobody on. Where’s Sal Licata?”

The Boomer and Gio clip is mostly those hosts ranting (and talking over Chernoff and each other), but it does have some interesting elements. In particular, Chernoff says that the story of Russo faxing in his resignation (which Esiason brings up) isn’t true. Esiason says “The only time those idiots make news is when they talk about what’s happening here. …All they do is sit around and take shots at guys that take their places.”

Chernoff then says “I don’t think it was the nicest thing that someone could have said. …I don’t know what Mike’s plans are, I know where Dog has been for the last 10 years,” Esiason asks “Where?”, Chernoff says “On satellite,” and Esiason responds “Witness protection?”

Afterwards, Chernoff says “Knowing Dog, I think he was trying to be funny,” Gio chimes in with “It wasn’t funny!” and Esiason says “It would be one thing if our afternoon show was crushing them all the time and they had a shot to get back at them, but it’s the Mike Francesa Studio, they open the first show saying Mike and Chris, they built it. And then the second [Mike and Chris] have an opening, two and a half months in, they say there’s going to be an opening at FAN? That’s just wrong. Classless.”

The morning hosts have a point here, as this really wasn’t great from Russo, and was a weird comment to make at this point. Regardless of his personal history with the station, it’s not clear why he needed to trash them and then speculate about who else would leave. And Boomer and Gio are right that it’s not particularly good of Russo and Francesa to rip successors who haven’t been taking shots at them. But the morning guys would have made a better case if they’d let Chernoff talk and get his own thoughts out there, or if they hadn’t both talked all over each other throughout this. And they seem to be maybe taking this a little more seriously than it deserves, and firing back in harsher terms (“idiots,” “witness protection”) than anything Russo said. At the end of the day, though, it seems there’s yet more Francesa drama to be found.