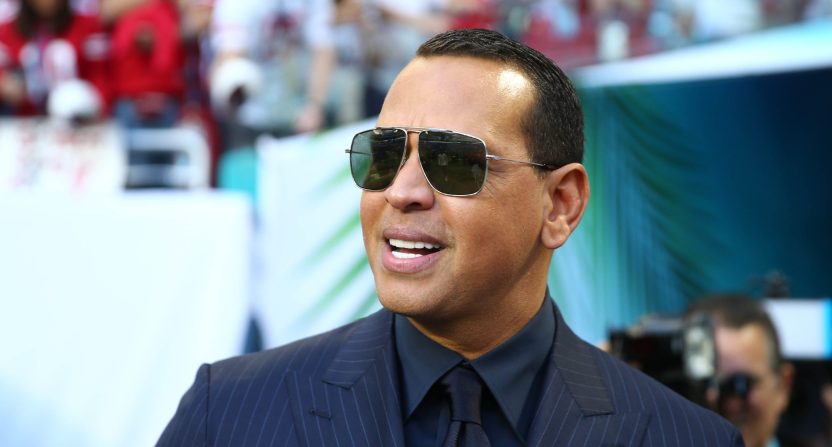 And on Thursday night, Darren Rovell of the Action Network and Andrew Marchand of the New York Post — Marchand also had the initial scoop — report that Rodriguez will indeed do the alternate broadcast on Sunday Night Baseball, and A-Rod will be joined by New York Yankees television play-by-play man Michael Kay.

Rovell — who was first on Thursday night’s report — notes that A-Rod would rather do this broadcast option due to his obligations as an owner of the NBA’s Minnesota Timberwolves.

Allows A-Rod, who turned down deal to be on Sunday Night Baseball, to have presence while doing fewer games, focusing on TWolves.

Marchand reports that Kay and A-Rod will do “somewhere between 10-12 games” for the alternate broadcast, whereas there are roughly 25 weeks of Sunday Night Baseball. He adds that Kay will continue to call Yankees games like usual for YES Network, while Cone’s schedule as a YES color commentator “will be reduced.”

He also confirms that Cone will be on the main Sunday Night Baseball broadcast, along with Eduardo Pérez (analyst) and Karl Ravech (play-by-play).

The new SNB team will consist of YES’ David Cone and Eduardo Perez as analysts, while Karl Ravech will be the play-by-player. Cone is expected to stay at YES, though his schedule will be reduced.

It’s unclear how exactly this alternate Sunday Night Baseball broadcast will work, but it’s surely inspired by the ManningCast that has been a hit for ESPN’s Monday Night Football (ESPN’s MegaCast for the College Football Playoff has also been a well-received alternate broadcast).

However, it remains to be seen if a baseball conversational broadcast featuring Kay and A-Rod — and guests, we can assume — will go over anywhere close to as well with viewers as a football broadcast with Peyton and Eli Manning (two highly popular and highly intelligent quarterbacks — and using those smarts for excellent X’s and O’s breakdowns; nobody wants analysis that intense for regular-season baseball games — to go with the entertaining aspect of watching two brothers banter, of course).

Still, this alternate format may suit A-Rod better than the color commentator role in the booth, as Awful Announcing’s Andrew Bucholtz wrote on Wednesday:

While the full format isn’t known yet, it might be more suited to Rodriguez’s strengths; we’ve noted several times over the years that he’s often impressed as a studio analyst with Fox, where he has time to look for particular points during a game and highlight them in detail in a later segment instead of feeling the responsibility to chime in on each play (which has frequently led to missteps). A during-the-game alternate broadcast wouldn’t remove that time pressure, but if it wound up being more conversational (like MLB Network’s Clubhouse Edition broadcasts) that might lower the need for Rodriguez to chime in on each play, and might allow for him to get into longer and more detailed discussions on points he’s interested in. And that could be a benefit for viewers compared to what Rodriguez has offered on the main Sunday Night Baseball feed.

Now we wait for more details about the format. But would you tune in for a ManningCast-like broadcast featuring Kay and A-Rod?