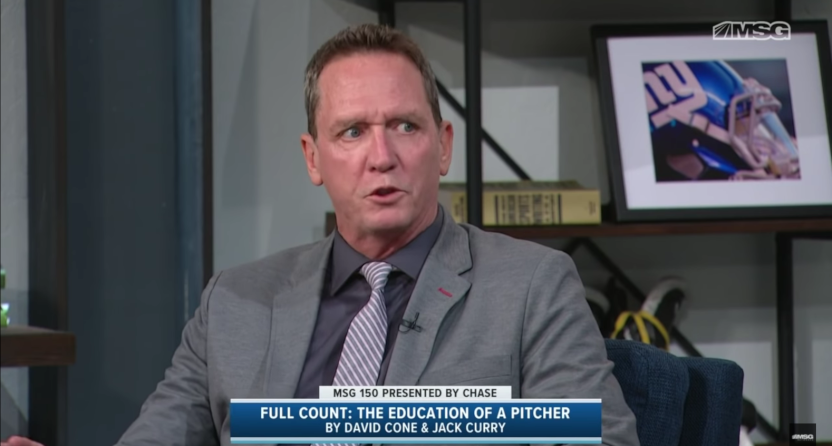 There’s been a lot of discussion about what’s ahead for ESPN’s Sunday Night Baseball broadcast this season (if there is, in fact, a MLB season) following Matt Vasgersian’s October exit. At that time, Andrew Marchand of The New York Post (who broke the news of Vasgersian’s exit) wrote that ESPN was “expected to keep” Alex Rodriguez on Sunday Night Baseball; Rodriguez had been the broadcast’s only analyst for the past two seasons following Jessica Mendoza’s shift to other ESPN roles, and had been working with Vasgersian and Mendoza on the broadcasts since 2018.  Now, though, Marchand writes that Rodriguez may wind up hosting an alternate feed somewhat analogous to the Monday Night Football alternate ManningCast, and that YES’ David Cone (seen above in a MSG interview in 2019) and current ESPN analyst Eduardo Pérez could wind up on the main booth alongside play-by-play voice Karl Ravech.

ESPN is considering a Manningcast-type broadcast for Alex Rodriguez as it reshuffles its “Sunday Night Baseball” coverage, The Post has learned.

If this were to happen, A-Rod would be out of the regular “Sunday Night” booth.

…Meanwhile, YES’ David Cone has once again emerged as a candidate for the lead SNB game crew, according to sources. There is the possibility of a booth that consists of Karl Ravech as the lead play-by-player with Cone joined by Eduardo Perez as the analysts.

…ESPN’s top radio play-by-player is Jon Sciambi, who is also the TV voice of the Cubs. ESPN appears likely to go with Ravech – its longtime studio host, who moved to play-by-play – over Sciambi.

There are a couple of notable things with the Cone discussion. For one, as Marchand notes, Rodriguez reportedly pushed for Cone to join the SNB booth in 2020 when Mendoza was removed, and ESPN was reportedly in talks with Cone then. But they instead went with the two-man pairing of Vasgersian and Rodriguez. So it would certainly be interesting to have him come in and not pair with Rodriguez, but rather Pérez. And that’s also notable considering how Marchand also discusses ESPN’s declining baseball tonnage, with their new MLB deal (through 2028) no longer featuring a midweek package (which has not yet found another home, despite Barstool rumors), and the less analysts they need as a result. It would certainly be unusual for them to bring in an outside figure like Cone (who already has a job calling Yankees’ games for YES, and would likely keep that, and would need to figure out scheduling around that) at a time when they’re dialing down their MLB games overall.

It’s also interesting to hear this discussion of Rodriguez on an alternate broadcast. It’s worth noting that this is not necessarily exactly the ManningCast format (for one thing, there’s no obvious second figure to banter with Rodriguez the way Eli Manning does with Peyton); that’s more of a shorthand many are using for alternate feeds (which long predate the ManningCast, including in MLB; the Manningcast has just been a successful example of that concept). Marchand notes that no particular format or personnel lineup’s yet been decided on for those alternate broadcasts, and it also isn’t clear if they’d air every week or more infrequently. So there’s a lot up in the air there.

But beyond that, the idea of moving Rodriguez to an alternate broadcast is certainly notable, and it comes with some pros and cons. While the full format isn’t known yet, it might be more suited to Rodriguez’s strengths; we’ve noted several times over the years that he’s often impressed as a studio analyst with Fox, where he has time to look for particular points during a game and highlight them in detail in a later segment instead of feeling the responsibility to chime in on each play (which has frequently led to missteps). A during-the-game alternate broadcast wouldn’t remove that time pressure, but if it wound up being more conversational (like MLB Network’s Clubhouse Edition broadcasts) that might lower the need for Rodriguez to chime in on each play, and might allow for him to get into longer and more detailed discussions on points he’s interested in. And that could be a benefit for viewers compared to what Rodriguez has offered on the main Sunday Night Baseball feed.

It’s worth noting that a big part of what has made the ManningCast work is the public’s interest in Peyton and Eli Manning, though. There’s a reason that ESPN chased after Peyton forever, even accepting only limited ESPN+ deals for Detail and Peyton’s Places before they finally got the ManningCast; there’s long been wide appreciation for and interest in him, with him (and Eli as well) even hosting Saturday Night Live. There certainly isn’t that much popular love for Rodriguez, with many still upset at him over steroid usage (which gained much more traction and memory than the discussions of that around Peyton), over various incidents from his playing career, and more.  So whether a “RodriguezCast” would actually gain enough viewers to make it worthwhile (and keep in mind that despite all the Twitter love, the ManningCast still dramatically trails the conventional MNF broadcast in viewers) is a question up for debate. We’ll see if that happens, and we’ll also see if this report of Cone potentially joining the main SNB booth comes to past.