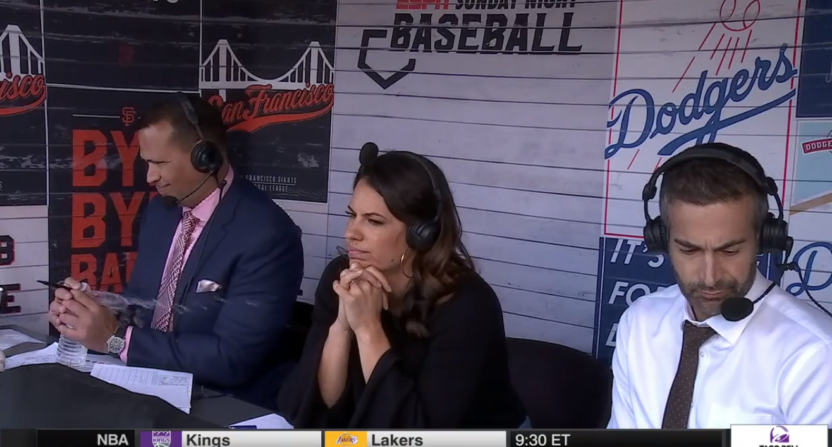 ESPN’s new Sunday Night Baseball booth of Matt Vasgersian, Jessica Mendoza and Alex Rodriguez has taken some criticism so far, especially when it comes to some of Rodriguez’s failed pitch-prediction attempts. That’s no surprise to Vasgersian, who said before the season “A lot of people are going to be just listening for mistakes instead of watching the game.” In a podcast with John Ourand of Sports Business Journal that was recorded before Sunday’s Mets-Nationals broadcast and released Monday, Vasgersian said he thinks the new booth has done well so far, and they’re not particularly worried about the outside criticism.

Here’s the podcast in its entirety:

“It’s gone great from where I sit because the support we’ve had is awesome. And look, any time you’re involved in something new, like we are, there’s scrutiny, there’ are detractors built in, there are people that are going to like what you’re doing, there are people that aren’t going to like what you’re doing, and until you get to a point that feels good for you, none of that outside stuff really resonates.”

Later in that conversation, though (around 4:30), Vasgersian had some interesting remarks about how the booth is still coming together and how he’s adapting to his role as “quarterback” of the booth.

“In that three-person booth, I am by far the least interesting person,” he said. “For me, it’s trying to figure out the comfort level between the three of us. Our first two games were in LA, it was really good luck/timing that we had the same matchup in back-to-back games, and the second game, it was almost like two different games. The first five innings were competitive and exciting and then it became kind of a laugher after that, so it gave us an opportunity to kind of do it both ways, service a game, get more into strategy and actual analysis, and then have some fun.”

“In terms of the balance, I want to make sure Alex in particular is comfortable. He hasn’t done this ever before. And Jessica, being the senior member of both the Sunday Night Baseball and Monday Night Football booths, take that in for a second, she’s done this, but she still has to deal with the perception that ‘You’re a female analyst, you never played Major League Baseball,’ and she’s aware of that, and she handles it brilliantly.”

“My position was zero, right? But she’s an analyst, she’s scrutinized unfairly as such. People are more forgiving of the play-by-play guy never having strapped it on, it’s different when you’re an analyst. At least that’s the perception, I don’t necessarily agree. But for me, I just want them to feel comfortable. If that means early on maybe more eye contact than not, maybe, without sounding gratuitous, ‘Hey Alex, what do you think? Hey Jess, what do you think?’ We want to avoid that [becoming gratuitous], but occasionally I might need to direct something to one of them that way, with a name attached to it.”

“When a booth is functioning on all cylinders, there’s this nice symbiotic dynamic between the producer and the people in the booth where just a few words are necessary from the guys in the truck, and then it’s a series of connected statements that come out on the air. I can make an observation, flip that imaginary softball to one of them, they grab it, take it in a direction they like, it gets back to me to either add to or start over again, and it’s not this directed conversation with a lot of names and pronouns. You’re just vibing.”

“That’s what we’re trying to get to, and it has to happen organically; the more time we spend together off the air, quite frankly, I think the easier it is to achieve on the air, and we’ve been doing a lot of that, being together in meetings, dinner, socially, coming to the ballpark on Saturday. For me, it’s important for me to know what they know, not because I’m going to jump in and grab their proprietary information, because it doesn’t mean anything being delivered from me, but I need to get them to that, or from that, occasionally.”

It’s interesting that Vasgersian is well aware of the criticism, even though he says he isn’t paying much heed to it, and it’s also interesting that he’s describing this as so much of a work in progress. That may be fair; these are three people who haven’t worked together before, and Rodriguez is in his first season as a game analyst of any kind, so of course there are going to be some initial hurdles. And they’re doing this on a very high-profile stage, so of course there will be criticism, and not all of that criticism is fair. And, for what it’s worth, at least this booth is providing some notable moments and stories. But this conversation also seems to indicate that Vasgersian is aware this isn’t a fully-smooth product so far, and it will be worth watching to see if it develops into more of one as the season progresses.

There are some other notable moments in this podcast, including Vasgersian talking about the issues in calling games at Nationals Park thanks to the extremely high booth location (and Fox building a temporary lower booth there for playoff games; that presumably hasn’t been done permanently thanks to the desire for revenue from suites with good views something that’s creating booth location issues in many ballparks) and a discussion of Rodriguez adapting from player to broadcaster. But the most interesting takeaway may be this inside perspective on how the booth isn’t at the “functioning on all cylinders” level yet. We’ll see if it gets there.