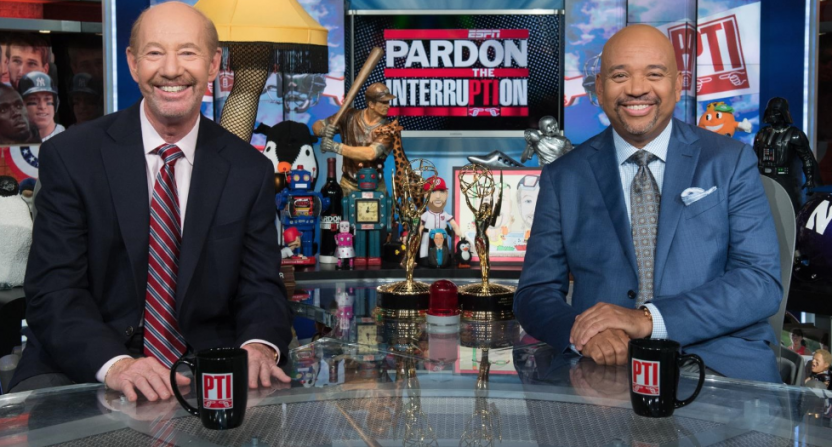 Brace yourself for Tony Kornheiser’s Uranus jokes. Get ready to hear Michael Wilbon rage against analytics. Welcome to the 20th anniversary of Pardon The Interruption, boys and girls.

The groundbreaking show, popularly known as PTI, turns two decades old next month. ESPN will commemorate the anniversary with a series of projects, including a one-hour special on Tuesday (Sept. 28). In a rapidly changing media world, PTI’s longevity is an amazing achievement. Nobody thought it would still be relevant today after the first episode debuted on Oct. 22, 2001 with this tongue-in-cheek intro:

“Pardon The Interruption, but I’m Mike Wilbon and welcome to opening day in this bizarre television experience.”

The humor in that opening might be lost on a younger generation. Believe it or not, there was a time when the idea of having two old sportswriters host a daily national television program seemed as pioneering as colonizing Mars. How was this going to work? We tuned in partially due to curiosity, partially to see if this experiment was going to crash and burn.

Not only did the show succeed, but it has lasted longer than most marriages. PTI forever changed sports talk, discussing games and athletes in a playful new way. You didn’t have to treat Shaq vs. Kobe as if it were Bush vs. Gore. You could have fun. What a concept.

PTI didn’t invent the sports debate show, but certainly perfected it. And it was vastly different from the OG of ESPN talk shows. The Sports Reporters (1988-2017) was the sports version of the Sunday morning political shows like Meet the Press. Sports writers from all over the nation appeared weekly to give serious commentary with little flair and few jokes.

Another predecessor was The Sportswriters on TV — a show as no-frills as its name. It featured Chicago reporters arguing around a dimly lit card table in what looked like the saddest basement you’ve ever seen. It was so dark that there could have been hostages in the background, and you wouldn’t even notice.

PTI saved us from all that. And it’s no accident that the show whih most resembled PTI prior to its inception wasn’t even a sports show. Chicago native Erik Rydholm, the executive producer of Pardon the Interruption, said Siskel and Ebert’s At the Movies was a major influence.

Film critics Gene Siskel and Roger Ebert hosted a show over decades. Their style was simple: they discussed the latest movies, giving them a “Thumbs up” or “Thumbs down.”

They were the most influential critics of their time, and perhaps ever. But people didn’t tune in simply for their opinions. People tuned in because they loved to listen to Siskel and Ebert bicker like dysfunctional siblings. Sound familiar?

“You saw the best versions of themselves on television,” he said on The Big Picture podcast. “You saw them come to life and you saw them as human beings. You didn’t see them as analysts. You saw two people who could get under each other’s skin. […] When the people on the screen are passionate about something, the audience tends to be passionate about the discussion.”

So ESPN brought on two famous sportswriters to host its experimental show. PTI had an advantage. Siskel and Ebert were rivals working at competing newspapers: the Chicago Tribune and the Chicago Sun-Times. They were frenemies at best. It took time to build a rapport.

No such baggage with Kornheiser and Wilbon. They were not only co-workers, serving as columnists for The Washington Post, but are longtime friends. Rydholm didn’t just put together any sportswriters. He picked guys who had built-in chemistry. How they communicate on-air is supposedly not all that different from their conversations off-camera.

From the very first show, the on-screen connection between the two was obvious. Sure, there were some hiccups. This had never been done before. But having a variety of topics with a clock to keep the hosts from being bogged down kept the show moving and fresh.

Kornheiser was willing to make silly jokes and leaned into being a curmudgeon with his dated references. The younger Wilbon was more willing to play the straight man role. PTI quickly caught on and became the show that even non-sports fans would watch.

Their banter was usually good-natured. But when Kornheiser and Wilbon did get into heated arguments, it made for great television.

Over the years, PTI continues to have a large audience. According to ESPN, over the past few weeks, the show is averaging 626,000 viewers, making it the most-viewed sports studio show on television. More than 3.4 million have tuned in for those episodes.

The legacy of PTI is complicated. Viewed in isolation, the show should be applauded. However, PTI led to ESPN putting too much stock in debate shows. This birthed inferior copycats, most notably ESPN’s own First Take.

When Kornheiser and Wilbon argue, it appears believable. When grating Stephen A. Smith and his various cohosts (formerly Skip Bayless, formerly Max Kellerman, currently an assembly line of personalities) argue, it comes across as contrived and inauthentic.

PTI made Kornheiser and Wilbon millionaires. Great for them. But their success on television played a role in ESPN hiring more people from newspapers. That led to a talent drain in print and contributed to the decline of print journalism. Of course, this was always going to happen with the rise of the Internet, but that exodus certainly didn’t help.

Pardon the Interruption remains popular and is a more enjoyable way to catch up on news than SportsCenter. But it’s not the same show it used to be. After 5,000 episodes, how could it be? However, its impact will continue to resonate long after Wilbon calls us “knuckleheads” for the very last time.