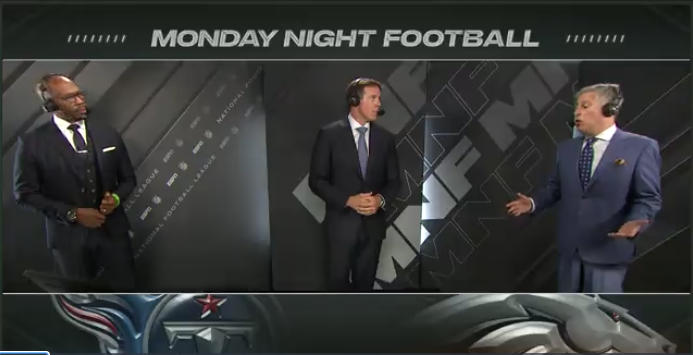 For the first time since Mike Tirico’s departure after the 2015 season, I’m confident that a year from now I will be in bed asleep, not reviewing a new Monday Night Football booth. That’s an assignment that that can have you writing well past 4 AM ET with the second game ending at 1:30 AM.

The last two years it was evident from the start that there were obvious problems, chemistry issues, and deficiencies with the MNF booth. The recipe just wasn’t right. It was like tasting a soup and knowing something had already gone wrong. Sure, some salt or garlic powder could make it better, but it was never going to be good soup.

With no preseason games to tune their chemistry, a nearly empty stadium, and a bit of a drab game, Steve Levy, Brian Griese, and Louis Riddick landed somewhere between fine and good in their debut. I don’t think many were expecting anything different; Levy and Griese have generally operated in this neighborhood and Riddick has long been a very consistent entity. The questions were more how would Levy and Griese adjust to calling NFL games? And how would Riddick be blended in as a new ingredient?

One game in and I think ESPN executives and the NFL are breathing a heavy sigh of relief that this year will not bring a weekly dose of negative feedback about the state of the the MNF announcing booth. 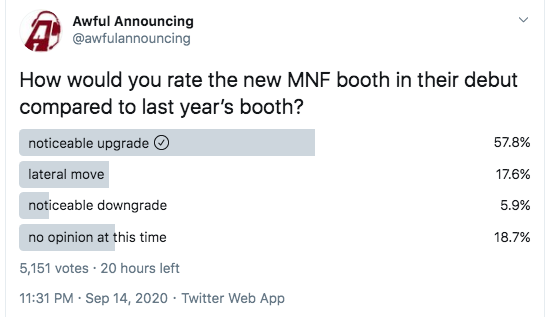 Steve Levy feels like the right fit at play-by-play. McDonough felt a bit too flat and Tessitore seemed to have a tough time navigating conversation in between big plays. Levy, who hadn’t called football for ESPN until 2016, calls game action fairly smoothly, with an energy and volume level that feels in-step with what you’d want on Monday Night Football (although he may register as loud for some.)

Spanning his career at ESPN, whether it’s been SportsCenter or in the booth, Levy has always seemed to lean into his charm and energy to draw those he works with (and hopefully viewers) into a sense of shared fun. This is a new crucial ingredient in the booth as when games hit lulls or become blowouts, the sense that the booth is fun is often just enough to keep people from changing the channel or going to bed. I don’t think MNF has had  a play-by-play guy that kept people tuned in since Tirico, who mainly achieved this through a different avenue of intellect and extensive background knowledge of many tangential topics. 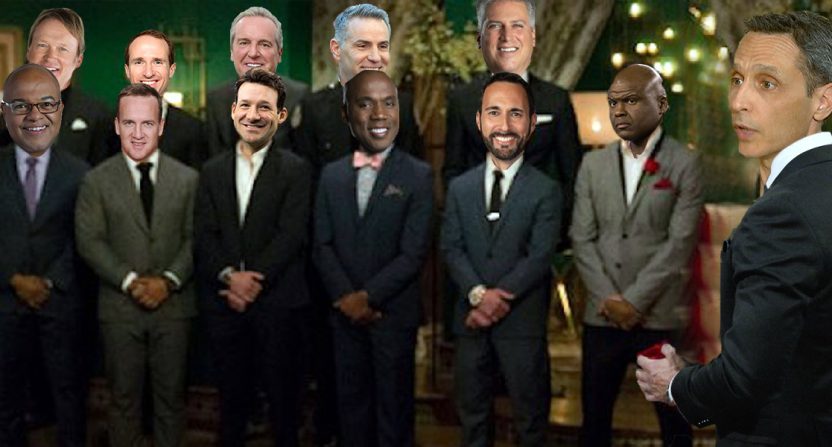 I previously overlooked Griese as a candidate for the MNF booth and that’s on me. I had Levy as my pick earlier this year but thought ESPN would look to attach more star power to him rather than going with his longtime broadcast partner. Given ESPN struck out on Peyton Manning, Drew Brees, and Tony Romo, the decision to keep Griese attached to Levy already seems to be the right call. I’ve thought that perhaps Griese might be a bit of a placeholder for a bigger name but he and Levy work well together and unlike Booger and Witten, I think we’ll generally avoid weekly viral gaffes. Of the three, it seemed Griese got the most lukewarm reception online, but I’d give him a solid B after expecting more of a C+ or B-  performance.

What was most encouraging was that the always dicey three person booth setup seemed to be operating pretty smoothly with Riddick having a fairly strong debut as well. I was a bit on the fence about Riddick, as his specific expertise is in breaking down rosters and film which shines through a bit more in studio. I also thought his delivery might be a bit flat or overly serious for MNF which often needs some breezier personalities to navigate three hours of airtime.

However, one week in I was pretty impressed at the chemistry between the trio, and particularly how well Riddick meshed with Griese and Levy. There seemed to be a shared understanding of when each announcer should jump in and out. There were no real significant awkward moments. The trio seemed to like working with each other and shared the ball nicely, something that historically has plagued bigger MNF booths.

The more I listen, Brian Griese legitimately seems to enjoy having another former player to bounce stuff off of with Louis Riddick. Either that or he's REALLY selling it.

If you look back at the last two years you really couldn’t go a full quarter without  long stretches of silence or a really aloof comment. A lack of chemistry and confidence seemed to fester as we and others began to rubberneck an announcing booth that just wasn’t going to work out. Last night, not only did we avoid those obvious pitfalls, there were plenty of exchanges that were good and came off as natural and unforced.

Levy and Griese had a fun back and forth about NBA fandom that was brief and contained before passing it to Riddick to break down a replay:

The broadcast successfully leaned into Riddick quite a few times for film breakdowns as well as general commentary on defenses which gave him a very well defined area of expertise that complemented the offensive focus and lighter rapport that Griese and Levy have established. Below we see Riddick and Griese smoothly and equally sharing breaking down some earlier game action. It’s the kind of routine competence that the last two booths frequently failed to provide.

The broadcast’s top moment came early in the fourth quarter when Stephen Gostkowski missed his fourth kick of the night, the games overriding storyline.

As seen in the clips below, Levy opened up the conversation and quickly passed it to Griese, who got in and out with his comments before a clean pass to Riddick. Levy quickly moved to Lisa Salters for a lot of good info before Levy and Griese wrapped up the conversation. The exchange took a little over a minute and featured all four members of the crew getting in clean commentary or insight into the growing Gostkowski story.

Again, not remarkable, this type of clean and fluid conversation with everyone getting to touch the ball is something that has largely been missing the last four years.

Another high point came late in the fourth quarter as Riddick made the case for the Titans to go for a 4th and 1, with Griese disagreeing. Coming from two very different ideological point of view on the matter, the pair had fun jousting in a way that seemed uncontrived and friendly. Levy jumped in siding with Riddick, and while the broadcast moved on, it was clear that Griese didn’t take it personally, and was actually fine being cast as the traditionalist thrown over the top rope.

It will take more games for myself and others to figure out where the new MNF booth lands on the scale, though it looks likely to be somewhere between “fine” and “very good.” The past two years (and perhaps longer depending on your opinion of Jon Gruden and Sean McDonough) MNF has been viewed as a clear fourth place, when comparing four network’s A-team booths. While it’s early, I’m not sure ESPN is the obvious non-medalist out of the four networks anymore. I think you can probably make the case that with the retooled booth, ESPN for some could rank as the bronze, or perhaps for some, the silver. At a very least, they’ve closed the gap to whoever your third-ranked booth is (mine being Buck and Aikman). That’s no small thing for ESPN considering the quagmire they’ve been in the  last four years.

On Sunday night in my weekly call to my parents, I had my dad explain his life philosophy of “Boring is good” to my girlfriend (who must be loving that I’m writing at 4:15AM right now.) Early on in the second MNF game, I became bored. The game was slow. The announcers were fine. I had the urge to look at my phone, tune out, or perhaps annoy my girlfriend. It was becoming clear to me that for the first time in two years, I didn’t have to be on Defcon 1 because who the hell knows what could go wrong during the MNF broadcast (small aside: it is nice to see Booger back in studio and doing well there. He was never positioned for success with the Boogermobile).

While it doesn’t sound like a compliment, for Monday Night Football- boring IS good! It means you’re not distracted or annoyed by the announcers. It means you don’t have a strong opinion about what the problem is, or who the problem is, and how to fix it. It means things are at an equilibrium that doesn’t jar you out of relaxation. It means that things are generally stable and you can look away without fear that you’ll miss something bad or weird that might be right around the corner. And hopefully it means I’m dead asleep at this hour a year from now.