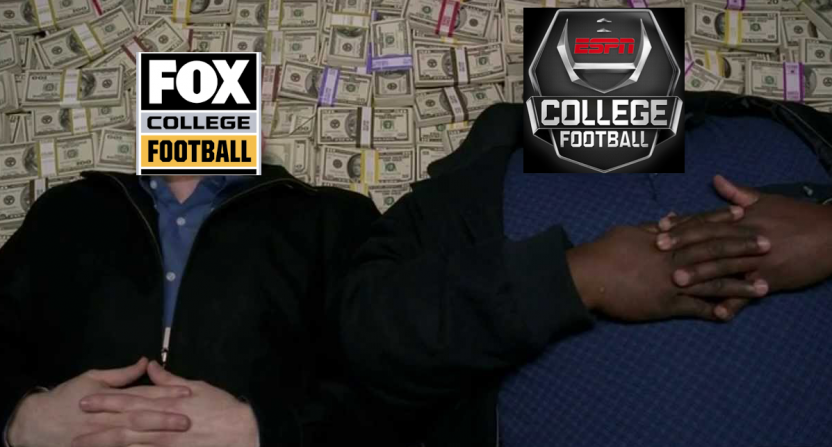 I’ve said it on Twitter a few times, but to me the most interesting thing in sports media is the chess game between Fox and ESPN on the college football front.

College football, ratings-wise, is this country’s second biggest sport. Unlike all the pro sports where you only need to cut deals with one entity (the league), college football’s setup allows for a lot more maneuvering. There are a dozen FBS conferences, with a current “Power Five” that soon enough might be a “Power Four”. Not long ago, there were six power conferences. And we’re only getting started here, as television deals, the playoff system, and bowls themselves are their own separate deals as well.

While ESPN really has only one deal with the NFL and one deal with the NBA, there are dozens of deals the network juggles and reshapes across college football. That’s a long way of saying, there really isn’t a sport where the television networks themselves significantly reshape the structure of  a major sport like college football. (Which is a assertion ESPN frequently and vehemently pushes back against).

Two years ago, I pointed out that Fox had latched onto a working strategy by presenting itself as an alternative to perceived SEC favoritism. Fast forward to this last year, and ESPN has answered (or if you ask them, their partners have answered) with a trifecta of planned moves.

First ESPN added CBS’s SEC package (timing on the switch TBD). You then had ESPN handholding the SEC’s addition of Texas and Oklahoma (again, they strongly assert no influence/role in this). ESPN also successfully back-channeled to help the CFP land on a preferred strategy of expanding of 12 teams, which would be a whopping windfall for colleges and the network. We took the time to guesstimate how much more money would come from expanding the playoff from three games and four teams to eleven games and twelve teams and came up with a whopping number of over $800 million a year, which many think is actually low.

To me, ESPN boxing out CBS from college football at any meaningful level, absorbing Texas and Oklahoma away from a conference they split rights with Fox with, and potentially owning a larger playoff all to themselves was a series of moves to essentially assert dominant ownership of this country’s second-most-popular sport. If ESPN truly wanted to outright own the sport, the possibility of boxing Fox out of the looming Big Ten rights renewal (minus the Big Ten Network) could have also been enough of a blow to Fox where perhaps they’d put FS1’s entire existence into question going forward.

While this sounds crazy, ten years ago NBC was on the verge of getting full control of the Pac 12’s rights. ESPN and Fox partnered at the very last minute to outbid NBC. Fast forward to now, and NBC is a few months away from shutting down NBCSN. That would 100% not be the case if that Pac-12 deal had gone through ten years ago. Instead FS1 lives on….for now. Anyways….

The CFP expansion hit the skids not long after Texas and Oklahoma was announced. Soon after, we had “The Alliance“, which is a flimsily constructed partnership of non-substantive actions, but whose goal is very clear and real- pushback against the SEC’s growing dominance and ESPN’s influence over college football.

The delay in expansion seemed mostly rooted in the concern that with the Big Ten, Pac 12, and Big 12 all having upcoming media rights negotiations which would involve ESPN, all were worried that if ESPN was spending an extra billion dollars on the expanded playoff, they might find ESPN a lot less motivated and lot more financially constrained to negotiate any renewal. It’s been mostly quiet in the months since The Alliance popped up and slowed down the expansion approval process.

That is until late Friday night, when Yahoo’s Pete Thamel dropped a report stating playoff expansion is perhaps back on track again.

“There’s a chance things get tidied up in the next few weeks, and the sport’s overlords channel their inner-Coastal/BYU and the 12-team College Football Playoff happens for the 2023 season. There’s a chance that this summer of process obstinance could push things back until the 2024 season. But usually when there’s money to be made, there’s plenty of motivation to move things along.”

Thamel’s report is a good one, especially for fellow college football nerds who enjoy the chess game between the conferences and the networks. I highly recommend you give it a read. Tucked away in that article is the following juicy nugget.

“The Alliance has somewhat cast ESPN as the bully and stood on the table for multiple media partners to buy into the next iteration of the playoff. But it’s understood that ESPN is likely to play ball with bringing in a second partner because it doesn’t want to lose everything when the current contract ends after the 2025 regular season. (Much like CBS did in fumbling the SEC by not playing ball in the short term and getting shut out.)

The College Football Playoff has been using two consultants to guide it through the process. The early projections for the expanded 11-game format are intriguing.

“I think, frankly, when we start taking a look at the numbers, the numbers are astronomical,” said one person involved in the process. “I think the presidents believe that we need to have an auction [for media rights]. I think it would be in our best interest to have at least two, three [or more] different groups bidding on this.”

Thamel’s reporting matches what I’ve heard. While my personal thought was that ESPN might be tempted to go for a killshot of Fox by acquiring the entire playoff package, which as the existing holder of the playoff they are in very good position to do, and then lick their lips and look at the Big Ten, I think the cost between those two moves is probably a bit of a reach. That’s especially true in this day and age of cord cutting and escalating friction with cable and satellite distributors.

Some sort of split with the playoff and continuing the status quo or better with the Big Ten and perhaps the Pac-12 (who knows what happens with the damaged Big 12 at this point), would be anywhere from a draw to a win for ESPN. Having the rights actually go to market is just too big of a risk for ESPN. Fox famously acquired the BCS rights for three really cringeworthy years from 2007-2009 in a terribly awkward setup in which they had no regular season college football rights. Those games were universally panned and were frankly bad for college football, let alone ESPN.

If the rights were go to market ahead of a proactive extension and expansion,  ESPN would be opening up the door for streaming services to think about making a move (highly unlikely), Fox to grab them outright (possible) or even a CBS and Turner joint bid similar to the NCAA Tournament (also very unlikely).

What seems most likely is that The Alliance nudges the playoff to have two partners share the expanded playoff so that there are two media companies fully invested in the sport. That would leave money for both of those companies to continue to spend on regular season rights, which would take The Alliance’s objection off the table. Naturally that once again would likely be a frenemy split between Fox and ESPN, which would preserve their dominance in the sport while NBC, CBS, Turner, and streaming companies continue to be mostly onlookers or small players.

If it were to come to fruition, would we see the championship game rotate between networks? Games exclusive on streaming services? Would some of the games move off of cable and onto network TV (currently all of the games of the playoff are on ESPN and not ABC). Who knows, but for now Thamel’s piece seems to indicate that the key to unlocking this stalled process is these two companies working together. If that ends up being the case the college football cold war of realignment, expansion, and conference favoritism seems destined for another decade of growing tension. If that’s what it takes to get a Pac 12 team back in the playoff, Oklahoma’s annual one and done, and Cincinnati or UCF into the playoff, that’s a pretty decent tradeoff imo.