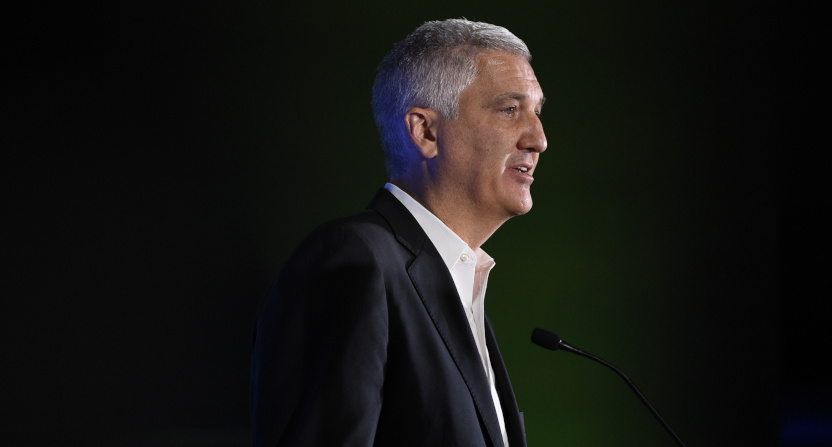 The big Pac-12/ACC/Big Ten “alliance” announcement earlier this week was notable for how little of substance the commissioners of each conference actually said, and for the revelation that there was no formal agreement signed. The main tangible topic identified was increased scheduling of games with schools from the other conferences, but no specifics were offered other than it would go into effect “as soon as practical.” But the Pac-12 was reportedly the conference pushing the hardest for this alliance (as per that above report from ESPN’s Adam Rittenberg), and Pac-12 commissioner George Kliavkoff (who took over that role earlier this summer) actually revealed what the scheduling goals might look like Friday. Here’s that quote from Kliavkoff (seen above at Pac-12 Media Day in July), via Colton Clark of the (Spokane, WA) Spokesman-Review:

To clarify: This means 10 games.
Eight Pac, then each season face one team from the ACC and one other from the Big Ten. https://t.co/poKrq2jcPU

It’s worth noting that at this point, this is just a “goal” stated by one conference commissioner (and the commissioner of the conference that was reportedly most eager for this “alliance”). So there’s no certainty that it will ever be implemented. But there are a couple of interesting potential impacts from this.

In particular, this proposal looks likely to boost the ACC’s strength of schedule. Several ACC teams currently only have nine (eight conference and the mandated one non-conference) games against Power Five teams or Notre Dame. This plan would get that to 10. This tweet from new Action Network reporter Brett McMurphy is a good illustration of where the conferences currently stand in percentage of games against Power Five opponents (and Notre Dame, but not BYU); for the record, 10 out of 12 games would mark 83.3 percent, the current Big Ten level.

Moreover, this idea specifies the conference (well, one of two) for two non-conference games each year, one at home and one away.  And on the TV side, this seems like it could be advantageous for Fox, partly with giving them some more ACC access. The ACC’s home rights are completely with ESPN, but with mandated road games against Pac-12 and Big Ten teams, some of those are going to wind up on Fox or FS1, as Fox has half of the rights for both of those conferences (and in the Big Ten’s case, the half with more preference). And boosting the numbers of Big Ten versus Pac-12 games probably also helps Fox, providing some further possible early season Big Noon Saturday matchups. Yes, this doesn’t really seem bad for ESPN either (its biggest impact is likely converting ACC versus Group of Five games into ACC versus Big Ten or Pac-12, and ESPN will get the ACC home games there and some of the Big Ten and Pac-12 home games), but it seems better still for Fox.

If these conferences went to this particular scheduling plan, a few of the likely losers would be Group of Five teams, BYU, and the remaining part of the Big 12. All of those teams would now have to fight for just two open spots on Alliance teams’ yearly schedules, and SEC teams looking to play Alliance schools would be in that mix as well. (This doesn’t seem like as much of a loss for the SEC, as it seems likely those teams (and especially the most prominent ones) can still get games against Alliance schools if they want even with less spots available, as we saw with Thursday’s announcement of a 2024 neutral-site LSU-USC game in Vegas.)

It’s also unclear how this would impact Notre Dame, which has a particularly strong scheduling bond with the ACC (where they’re a member in sports outside football) and a lesser one with the Pac-12 and Big Ten. Notre Dame probably still has the cachet to land some remaining games from Alliance schools even if they’re not counted in these two Alliance games. But it’s also possible that they get an exemption that lets them count as Alliance (as noted above, they’ve been counted as  Power Five in most of the rules along these lines so far).

At any rate, this is all extremely preliminary, with no public signoff from the other conferences and with no indication of a timeline. And maybe it will never come to pass. But Kliavkoff being willing to state this publicly is certainly interesting, and if this does wind up being implemented at some point, it would certainly be a big step up in terms of this alliance being an actual thing and not just a press conference. And it might have some notable reverberations for the TV side as well.