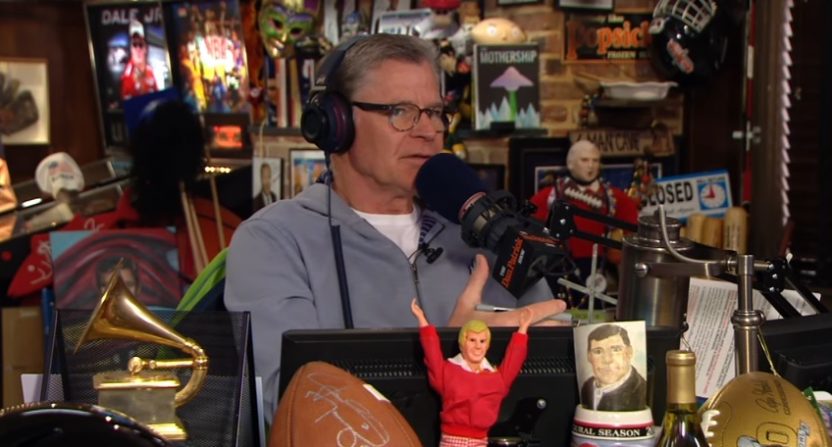 Dan Patrick was center stage on Super Bowl Sunday for NBC Sports. As host of Football Night in America, Patrick had a significant role in hosting the pregame and halftime shows, along with doing the postgame trophy presentation to the Philadelphia Eagles.

Patrick has been at NBC for over 10 years now, which is almost impossible to believe. In that time since leaving ESPN, Patrick has become even more recognizable compared to when he was anchoring SportsCenter in his famous partnership with Keith Olbermann. Patrick is on a very short list of people who have arguably had greater success after moving on from Bristol.

Patrick’s relationship with ESPN has noticeably thawed in recent years from its most frosty. Could we ever see the day where there would be a potential return to ESPN for DP?

According to Sporting News, the two sides had talks, but it’s noted that a return is “unlikely barring a miracle.”

A spokesperson for the company confirmed to Sporting News Sunday that it has talked with Patrick, whose dual contracts with NBC Sports and AT&T SportsNet expire this month. But ESPN sources said a reunion with Patrick is unlikely to happen barring a miracle Hail Mary pass at the last second.

“We had conversations with Dan and he has many fans in Bristol. But our radio lineup is strong and we aren’t looking to make a change,” spokesman Mike Soltys told Sporting News.

As the longtime host of NBC “Football Night in America,” Patrick hosted the network’s Super Bowl 52 five-hour pregame show from U.S. Bank Stadium in Minneapolis. He has his own weekday “Dan Patrick Show,” which can be heard Monday through Friday; 9 a.m. to noon ET.

And before you get too excited, Patrick addressed the report on his radio show Monday morning and it seems as if a full-time return to Bristol was never on the cards. However, Patrick did say that he met with previous ESPN president John Skipper about becoming business partners to some extent.

While Patrick said he definitely wanted to stay at NBC, he did open up about talks exploring potential partnership opportunities, like with Sports Jeopardy.

Patrick has such a good gig with NBC right now — hosting FNIA and his syndicated radio show on NBCSN — that it’s hard to imagine him trying to start over at ESPN once again at this point in his career. It’s nice to dream about the potential scenarios of Patrick stepping into the ESPN Radio lineup or rebooting the 6 PM SportsCenter once again, but it’d really just be your imagination at work.

And truth be told, a role like hosting Sports Jeopardy on the network or partnering together in other endeavors could make sense for both sides. Imagine Sports Jeopardy on ESPN before Around the Horn and PTI. That could be an awesome addition to the lineup. It could be a win-win for Patrick and ESPN and perhaps open the door for further collaboration down the line.