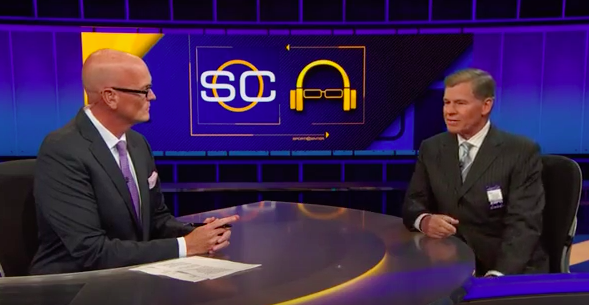 Even though it had nothing to do with what happened on the field, it’s not an exaggeration to say that one of the biggest sports moments over Labor Day weekend was Dan Patrick’s return to SportsCenter and ESPN.  It had been eight long years since Patrick last appeared on ESPN airwaves.  And after an acrimonious exit and many years in feisty competition with Bristol, seeing DP on the network that made him a nationwide star was as much of a long shot as Kansas and Washington State playing in this year’s National Championship Game.

And yet, on the debut of Scott Van Pelt’s midnight edition, there was Dan Patrick back in the SportsCenter studio.  With tongue firmly planted in cheek, Patrick even wore his ESPN visitor badge over his suit to make it clear that he was just stopping by for a moment to say hello.

Here’s the full interview between Van Pelt and Patrick.  I’ve heard some say it was great television, I’ve heard others say it was a tad bit awkward.  I think the best word to describe the interview is “surreal.”  Dan Patrick back on ESPN?!?  This is something we never thought we would see again!

Eight years doesn’t seem like it’s a long time, but so much has changed in that time – and I think that’s the major takeaway from this discussion.  Patrick’s radio show is simulcast on NBCSN and he hosts Football Night in America and the Olympics on NBC.  Van Pelt has his own edition of SportsCenter that eminates from ESPN’s trillion dollar futuristic studio and he’s now the face of the network.  This wasn’t a traditional walk down memory lane filled with nostalgia.  This wasn’t Patrick walking into the highlight desk, calling a Nats-Mets highlight package, getting in his signature lines, and then hitting the road.

This was something different.  Something honest.  Something perhaps unexpected, with several quotes that would probably make ESPN’s executives nervous.  (Especially the impromptu discussion about SVP’s latest decision to re-sign with ESPN instead of going to NBC with Patrick.)

Given everything that’s transpired in the past eight years, maybe that’s just fine.  Maybe we’re not supposed to go back and relive “The Big Show” and pretend that it’s 1997 again.  Given Patrick’s post-ESPN success and how it’s SVP’s stage now, maybe this organic “passing of the visitor badge” was just right to mark Dan Patrick’s return to ESPN.