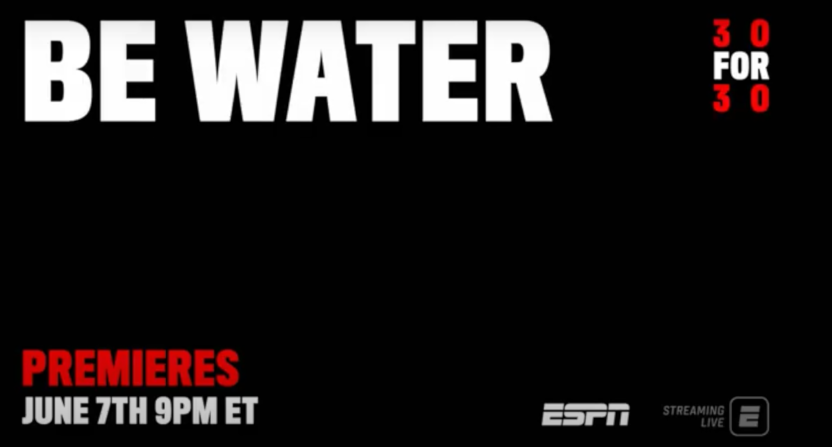 After Lance wraps up Sunday, ESPN is continuing their Sunday 30 for 30 documentary releases with Be Water, “an intimate and very personal look at the life and purpose that motivated Bruce Lee, the martial artist trailblazer and pop culture icon.” The documentary is directed by Bao Nguyen, whose previous work includes 2015’s Live From New York! (a documentary on the history and impact of Saturday Night Live) and 2019’s We Gon’ Be Alright (a four-part miniseries on the social divide over race). ESPN released a trailer for the film Thursday:

Be Water screened at Sundance in January, and received several positive reviews at that time. Here are a couple excerpts, first from Dennis Harvey of Variety:

Some movie stars level a kind of divinity that transcends personal preference — woe betide the dissenter who openly finds Audrey Hepburn cloying, or Cary Grant less than charming. That Bruce Lee had long ascended to that level of iron-clad cool was underlined by the biggest popular quibble with “Once Upon a Time in Hollywood,” over the single scene when Mike Moh’s fictive Lee is portrayed as an arrogant, bullying jerk easily whupped by Brad Pitt’s stuntman Cliff. To many, this jokey bit wasn’t just mockery of a beloved dead celebrity — it was tantamount to blasphemy.

“Live From New York!” director Bao Nguyen’s new “Be Water” helps explain the vehemence of that reaction, positing the late “kung fu movie” superstar as not just a singular charismatic talent but a game changer who singlehandedly broke the mold of hitherto stereotypical, largely negative Asian portrayals on Western screens. Almost half a century after the star’s sudden death at age 32, that magnetism retains its full power in this well-crafted documentary.

…Those expecting detailed insight into the making of his prime vehicles may be a tad disappointed at their rather cursory treatment here, amid what amounts to a conventional (if non-chronologically structured) birth-to-death biopic. But the ample archival footage — which includes a surprising wealth from his pre-Hollywood years — is absorbing, and the audio input from surviving associates interesting if seldom revelatory. They, including widow Linda, brother Robert, daughter Shannon, co-stars Nancy Kwan and Kareem Abdul-Jabbar, and many more (though “Way of the Dragon’s” Chuck Norris is notably absent) are shown as they are today only during the final identifying credits. Assembly is straightforwardly high-grade throughout, with film and TV excerpts used mostly in fine condition.

And from Ed Travis of birth.movies.death:

Largely eschewing the legendary aspects of Bruce Lee’s life and career, Be Water instead paints a very multi-faceted picture of Bruce Lee, the man. What’s fascinating is that, even some 40+ years after his death, Lee’s charisma, ambition, good looks, and potent philosophy still come bursting through the screen to almost work against Nguyen’s measured and humanizing approach. There were moments, interview clips, quotes, or fight scenes that simply caused my heart to skip a beat and revere the larger-than-life legend I was seeing up on the big screen. Bruce Lee can’t be contained!

Fortunately, even having passed away at the tragically young age of 32, his personal life was fascinating, accomplished, and worthy of the documentary treatment. Nguyen should be praised for trusting his instinct here and steering clear of any kind of hero worship or gossip fodder. Also noteworthy is that while many interviews are conducted, the “talking head” style so many docs slavishly adhere to is nowhere to be found. One keeps assuming the film will cut away to Shannon Lee, or Linda Lee Cadwell, or Kareem Abdul-Jabar. But instead we simply hear their voices (with an on screen identifier); visually we remain with whatever archival footage or stills are on screen. In the post-film Q&A, Nguyen addressed this as an intentional choice to put us in the time and place Bruce was in, and not pull us out into the modern day. This proves to be a very effective choice.

A documentary on Lee is a little outside the normal focus of ESPN’s 30 for 30 series, but the martial arts discussion here is certainly relevant to sports, and ESPN has found success with some outside-the-box treatments before (including the Oscar-winning OJ: Made In America). And there’s been a lot of anticipation for this Lee documentary ever since ESPN revealed it in a trailer advertising upcoming 30 for 30s during this year’s college football national title game. We’ll see how Be Water turns out, but it certainly seems like something that will draw some attention.