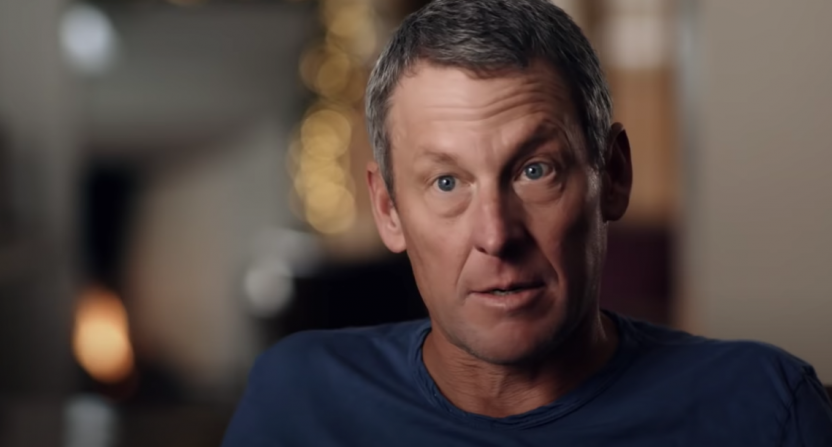 Part 1: Sun., May 24, 9pm ET on ESPN. Version edited for language will air simultaneously on ESPN2

Part 2: Sun., May 31, 9pm ET on ESPN. Version edited for language will air simultaneously on ESPN2

Installment: #108 by ESPN’s count (#109 by my count, counting the O.J. doc as one installment, although ESPN initially counted it as five different 30 for 30s, but now seems to list it separately, not as part of the series. Additionally, one finished project, Down In The Valley, has been suspended from airing.)

Most Similar To: Vick

Review: Give Lance and director Marina Zenovich some credit, because the film doesn’t wait around to address the elephant in the room.

The following quote takes place about two minutes in.

“The talk out there is that this is basically something to feature Lance Armstrong’s effort to resurrect his reputation and that yours is going to be a fairly sympathetic portrayal.” –  Charles Pelkey, former editor VeloNews

Ultimately (and as expected, due to Zenovich’s involvement), Lance is a high quality and engaging documentary. There is a lot to unpack, a lot of introspection, and a lot of history to retrace, and Lance is a fairly nimble and well crafted retelling of Armstrong’s life. However, despite its long length, there were plenty of stones that remained unturned. While the film certainly passes muster as a higher quality 30 for 30, I’m sure many viewers will share Pelkey’s stated concern about it, and that’s even if they decide to watch at all, which leads us to a much broader conversation.

If there is one takeaway from Lance and this year’s crop of 30 for 30s (along with The Last Dance), it’s that ESPN has made several strategic decisions regarding the direction of the series. 2020’s installments include much longer films, many of which debuted at film festivals (or were planned to before the pandemic). The bulk of this year’s installments have been directed by accomplished directors and focused on megastars who shined their brightest in the late 90s or early 2000s, eventually ascending to pop culture icon status. Another key ingredient in the 2020 batch of films is that many of the featured athletes are controversial or outright toxic, and an examination of their rise (and in most cases, spectacular fall) necessitated significant access to warrant these projects moving forward.

The crop of films over the last year include features on Dennis Rodman, Chuck Liddell & Tito Ortiz, Michael Vick, Lance Armstrong, Bruce Lee, Mark McGwire & Sammy Sosa, and, of course, Michael Jordan and the rest of the 1990s Chicago Bulls in The Last Dance. The first half of last year featured just four 30 for 30 films, one feature on Deion Sanders and then these three installments, of which I imagine only a sliver of sports fans can name even half of the subjects featured in the promotional materials.

It would be hard to argue that ESPN hasn’t purposefully pivoted into longer films featuring well known athletes, mostly from a certain time period, and with the aim of hitting the very small bullseye of offering a fair and honest untangling of high profile, messy subjects. My guess is that regardless of the critical reception of these higher profile projects ratings wise, this has proven to be a shrewd strategy and will perhaps be the guiding principle for the majority of installments in the near future. With that context in mind, is Lance a fair and honest documentary or, as warned early in the film, an “effort to resurrect his reputation”? I’ve wrestled with this question extensively after watching Lance.

This film eerily follows the blueprint of Vick, which is more or less a similarly long project that has its own elephant in the room, that being Vick’s attempt to move past his historical involvement with dog fighting. The first half of his 30 for 30 completely omitted the topic, with the difficult subject matter getting the spotlight in the film’s third hour before focusing on Vick’s comeback to the NFL in the fourth hour.

Lance is similar in that a lot of the worst of Armstrong’s transgressions are not substantively broached in the first installment, with the second installment containing the more damning subject matter. While I found Armstrong to be honest and forthcoming, sparking some moments of empathy or agreement when he went on the offensive a few times, my low opinion of Armstrong didn’t thaw much at all. Was that because the film was comprehensive and he couldn’t outrun and spin his past? Or was it because I was very familiar with Armstrong’s past, having watched the famous 60 Minutes segment about his doping as well as two very high caliber documentaries about Armstrong’s doping and and his aggressive coverup tactics?

This year's 30 for 30 slate feature two controversial recent icons. Both installments are 4 hours (with commercials).

Who do you think between Lance Armstrong and Michael Vick is a more redeemable figure that you're interested in hearing their version of their rise and fall?

This site has tweeted out a few stories about the upcoming Lance documentary, and I also tweeted the above poll, and what really stood out to me is that there just doesn’t seem to be the same appetite for an Armstrong tell-all image rehabilitation like there was for Vick, and perhaps McGwire and Sosa in a couple weeks. Similar to Vick, Armstrong doesn’t hide from tough questions and admits to the lives he’s ruined, but the film just doesn’t substantively get into the toxic minutiae of Armstrong’s past. I rewatched parts of Stop At Nothing: The Lance Armstrong Story to make sure I wasn’t imagining the monstrous past he had beyond doping, when he would regularly destroy anyone who dared to speak the honest truth that he was a fraud. His lies and intimidation came off as natural and consistent in Stop At Nothing and another documentary, The Armstrong Lie. Lance significantly avoids most of the specifics on these fronts. Some of his most high profile bad deeds or moments are dissected in Lance, but so many made for TV moments are not, which is even more surprising given that this film had the necessary participants involved in order to go down those roads.

Perhaps Zenovich was afraid of redundancy and to her credit, Lance doesn’t just omit his low moments, as five out of Armstrong’s seven (now vacated) Tour De France victories get almost no real discussion at all. The film generally stays in one lane and doesn’t stop that often, which seemed to equally avoid both some of the more obvious highs and lows of Armstrong’s life. You’re not going to learn much about cycling, the Tour De France, the mechanics of how the doping was done, how evasive Armstrong had to become to dope, how his sponsors and friends both knew and continued to support him, and the long list of individuals Armstrong steamrolled over with cold blooded efficiency.

Instead, we see Armstrong at various speaking engagements, cutting his finger while making a salad (several of his interviews show him with a bandage on that finger, which was entertaining), spending time with his family, and talking a whole lot. Lance is solely focused on Lance, and there is no shortage of Lance. He says the right things and probably meant the majority of them. He makes some good points and he states them intensely, but I never even approached the neighborhood of feeling sorry for him or moving past his cruel history of intimidation and legal bullying. But does this mean Lance is a bad film?

Whenever a scandal happens, there is a wave of gotcha journalism and a second wave of finger waving editorializing. The first two Armstrong documentaries thrive by using some combination of both. Has enough time passed so that Lance can speed by some of that backstory and sell him as a complex individual who merits a more thorough understanding of his life? I believe that the wounds are both too recent and too deep. Ultimately, despite being a sharply crafted and engaging film, Lance drifted a bit away from the ugly truth and did indeed become the sympathetic portrayal we were warned about early on. Perhaps I’ll be in the minority there, but I think given the ratings and buzz we’ve seen for The Last Dance and this year’s other 30 for 30s, I’m not sure any criticism about sympathetic portrayals of any of these featured individuals will register or force much of a change if the ratings continue to impress more than the film itself.