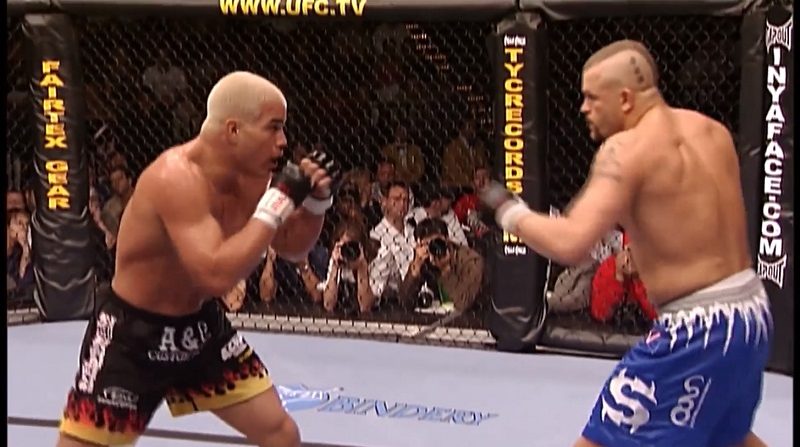 Installment: #104 by ESPN’s count (#105 by Ben’s count, counting the O.J. doc as one installment, although ESPN initially counted it as five different 30 for 30s, but now seems to list it separately, not as part of the series. Additionally, one finished project, Down In The Valley, has been suspended from airing.)

Most Similar To: Catholics vs Convicts, Celtics/Lakers

Review: First off, I am not your usual AA 30 for 30 reviewer. But since Ben Koo doesn’t have much interest in the UFC or knowledge about it, I’m stepping it (since, well, I do). Now, onto the review.

When I first heard about this 30 for 30, I was skeptical about whether or not there would be enough content to create a compelling film. Then I started watching the screener, and about two-thirds of the way in, the story naturally started to shift away from the “Chuck vs Tito” storyline, which bulked up the film a little more and actually made it more compelling.

The first 20 minutes of Chuck & Tito is focused more on creating background on the UFC, Chuck Liddell, and Tito Ortiz for viewers who aren’t avid fans or newer fans, who might not be familiar with the Liddell/Ortiz golden era of 15 years ago. Director Micah Brown does a good job at exploring the careers of Liddell and Ortiz traveling along parallel paths, and how they derailed and eventually intersected in explosive fashion.

Once the focus of the film turns towards the inevitable collision between Liddell and Ortiz, it takes on an anti-Ortiz bias (justifiable or not) that some might not appreciate. As the timeline shifts to between the months prior to the first fight between Liddell and Ortiz and the second fight between the two, UFC president Dana White really starts driving home the “Tito is dumb” talking point (which doesn’t seem too off base), and more of the focus is placed outside of the cage.

As the film rolls along, you can see the UFC beginning to turn away from Ortiz as the face of the promotion and turn toward Liddell. Much of this is because of how difficult Ortiz was to work with, but Liddell’s run of knockout victories that started with the first Ortiz fight naturally draws in eyeballs. I don’t think anyone can blame the UFC for changing their strategy, as we’ve seen numerous times in recent years, but it’s still interesting to see it come into focus in a shorter film instead of in real time over the course of months, or even years.

One of the biggest rivalries in combat sports gets the 30 for 30 treatment ?

The personal demons of both Ortiz and Liddell are touched upon, though not in extreme detail. Both men had difficult upbringings that are briefly mentioned, and late/post-career struggles. Liddell (and his wife, Heidi) are open about his battles with alcohol, while Ortiz discusses alleged drug abuse by ex-partner Jenna Jameson and domestic violence allegations against him by Jameson. I don’t know how much more mileage Brown could have gotten out of this part of the film, but it wasn’t glossed over, which I’m appreciative of.

The film also doesn’t romanticize the careers of Liddell and Ortiz. Their final fight, an embarrassing charade put on by Golden Boy last November, gets some airtime, and I was cringing while watching it again. White criticizes both men for fighting again, and MMA notables Tank Abbott, Royce Gracie, and John McCarthy all talk about what happens in those late career stages when fighters should hang it up, but just can’t quit. It’s not a perfect end, but at least it’s not the endlessly positive “they love fighting and just can’t quit!!” narrative that gets spun out every so often in combat sports.

Thankfully (which you’d expect, given the participation of White and Lorenzo Fertitta, among others), the UFC played ball with Brown, and there is a ton of archival UFC footage in this film. In reality, it would have been an absolute bust if fight clips weren’t included, but they are.

The two fights (the third Golden Boy fight never took place in my mind) aren’t discussed in extreme detail, which I had expected, but they really don’t need to be. The footage speaks for itself in both cases, and thankfully, the UFC has it uploaded on YouTube as a free fight in case you wanted to watch one of the UFC’s most iconic fights in all of glorious five and a half minutes.

All in all, I was pleasantly surprised by the UFC’s first appearance in the 30 for 30 series. I thought the focus of this one would be a bit too tight, but the story was told very well, and most (if not all) major points were covered. Chuck & Tito dives deep into the rivalry between Liddell and Ortiz, and gives fans a good sense of why these two were so important to the UFC and how their rivalry began.