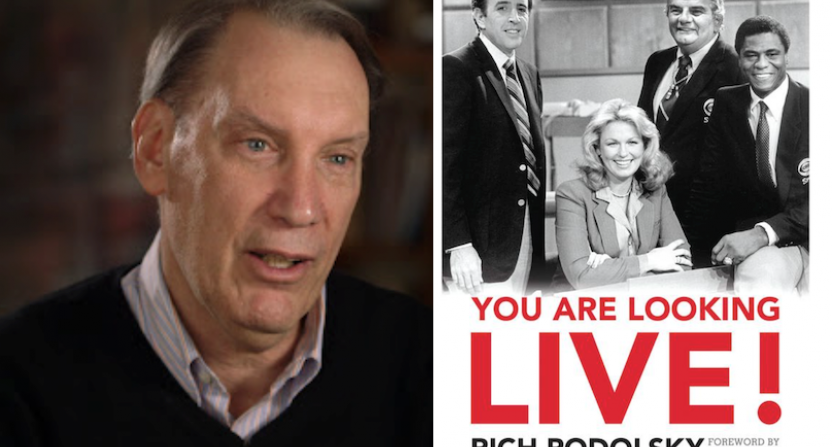 Millions of football fans will tune into NFL pregame shows before this weekend’s slate of games.

Then on CBS, there’s the pregame show that set the standard for all others that came afterward, The NFL Today. Yet with all due respect to James Brown, Phil Simms, Bill Cowher, Boomer Esiason, and Nate Burleson, the current version of CBS’s NFL lead-in doesn’t have the cultural impact of its ancestor. “Ancestor” sounds very old, but we’re talking about a show that originated 47 years ago in 1974. One year later, CBS Sports found the mix that made The NFL Today a cultural phenomenon.

Author Rich Podolsky chronicles the origins of CBS’s ground-breaking pregame show in his latest book, You Are Looking Live! How The NFL Today Revolutionized Sports Broadcasting. As he details, NFL pregame shows weren’t live before 1974. They were taped days in advance. Imagine that today when reporters like Adam Schefter and Jay Glazer are tweeting out who’s active and inactive leading right up to the 1 p.m. ET kickoff.

“Back in 1975, there were only three stations: CBS, NBC, and ABC,” Podolsky told Awful Announcing in a phone interview. “There was no cable. There was no ESPN; ESPN was six years away. There was no internet. There was no way to get more information about the NFL. As Jim Nantz points out in the book’s foreword, if you were a football fan in 1975, you were starved for information and The NFL Today was a godsend.”

One year later, CBS hit the right formula that made The NFL Today a visionary sports broadcasting show. Brent Musburger replaced Jack Whitaker as the lead host (there’s a trivia question for you), joining Phyllis George and Irv Cross. Finishing the foursome was Jimmy “The Greek” Snyder, already well known throughout the country for his betting column that was syndicated in over 300 newspapers.

Podolsky credits producer Bob Wussler for the “audacity” to add Jimmy The Greek to the show. NFL commissioner Pete Rozelle didn’t want any mention of gambling in the press, asserting that only two percent of the audience bet on games. (That prompted Beano Cook’s famous line while he worked in CBS Sports’ PR department, “If that’s true, they all live on my block.”)

Acknowledging betting on the show was a fun inside thing for those involved behind the scenes, according to Podolsky. Musburger’s signature “You are looking live…” introduction to each game was a nod to gamblers, informing them of the weather at each site. The Greek worked around Rozelle’s concerns by predicting scores, rather than talking about point spreads and odds. And though Rozelle never said so publicly, the interest in gambling fueled the popularity of the league.

The Greek may have been The NFL Today‘s most popular figure. When the show went on the road, fans pursued him for autographs. And Musburger was probably the most important addition to the show, establishing himself as arguably the best studio host in the history of sports broadcasting. But Podolsky hopes that You Are Looking Live informs readers and fans most about George, the former Miss America who became a pioneering figure in the sports media industry.

“Today’s people don’t know Phyllis at all,” said Podolsky. “When I talk to people in their 20s and 30s, they have no idea who I’m talking about. Part of it is because Miss America is no big deal anymore. It used to be one of the highest-rated shows of the year.”

Imagine the uproar that would ensue among media observers and fans if a beauty pageant winner with little broadcasting experience was added to an NFL pregame show nowadays. Now try to imagine the reaction when The NFL Today was essentially the only pregame show of its kind. Would producers and executives take that kind of chance today? Podolsky credits Wussler for wanting to break up the “male ghetto” of sports on television and believes studio shows need to give women a higher profile.

George’s death in 2020 is what compelled Podolsky to write a book about the history of The NFL Today. The longtime reporter had a personal stake in the story as well, having written for the show for “five of the happiest years in my life” beginning in 1977. He recounts the thrill of working with Cross, one of his idols, 16 years after he sold programs at Philadelphia Eagles games as a kid. (Cross passed away while the book was being written, forcing Podolsky to rewrite the epilogue.)

“When Phyllis passed away so suddenly, I started reconnecting with a lot of my old CBS cohorts,” Podolsky recalled. “As I was reconnecting with everyone, it hit me how much The NFL Today back in those days, back in the ’70s, meant to all of us and how much it impacted our lives.

“The fact that Bob Wussler came in, who was just a visionary, came in to run CBS Sports and he had a vision of not just doing a live NFL pregame show, which really had never been done before, to have not just a woman but a woman who was a former Miss America on the show, and to have the first person of color as a co-host on the show in Irv Cross. This really was earth-shaking in 1975.”

Podolsky believes that the chemistry of Musburger, George, Cross, and Snyder on CBS’s iconic pregame show still has lessons to teach producers of current NFL studio shows. Rather than try to cram so much in a program with newer technology and animation, the on-air chemistry of the team — “four personalities who got along like battling cousins” — is most important.

“[The NFL Today] also was tremendously important for the NFL,” said Podolsky, “because the popularity of the show not only grew the ratings for the show (and in its first year, it won 13 Emmy Awards), it helped grow the NFL’s audience and expand their base. It was instrumental in helping the NFL overtake Major League Baseball as America’s No. 1 sport.”

You Are Looking Live! How The NFL Today Revolutionized Sports Broadcasting hits bookstores on Oct. 15. You can order the book at your local bookstore or through outlets such as Amazon and Bookshop.org.