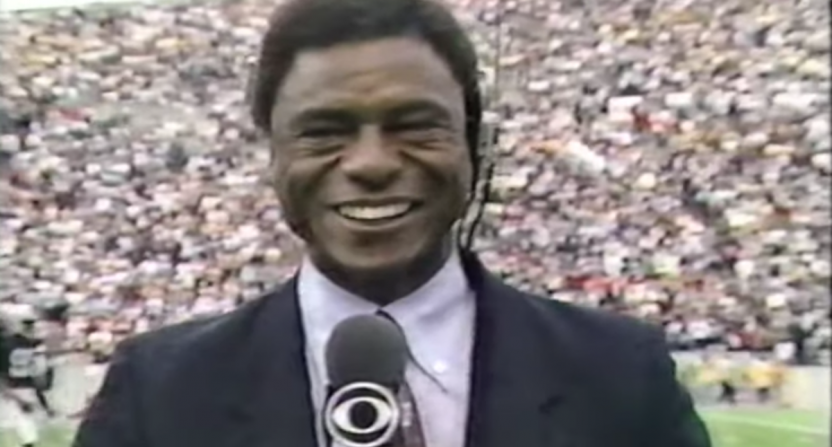 Irv Cross, one of the signature voices of The NFL Today and CBS Sports for nearly 25 years, passed away on Sunday. He was 81 years old.

Following a nine-year career as an NFL defensive back, six of those seasons with the Philadelphia Eagles, Cross joined CBS Sports in 1971. With that, he became the first Black man to work as a full-time analyst on national television.

Cross was part of CBS’s iconic The NFL Today pregame show with Brent Musburger, Phyllis George, and Jimmy “The Greek” Snyder beginning in 1975. He co-hosted the show with Musberger until 1989.

On the death of Irv Cross . . . pic.twitter.com/ntx3KcKyz7

In 2009, Cross was recognized for his work with the Pro Football Hall of Fame’s Pete Rozelle Radio-Television Award, honored for “longtime exceptional contributions to radio and television in professional football.”

“All of us at CBS Sports are saddened by the news of Irv Cross’ passing,” said CBS Sports Chairman Sean McManus in a statement.

“Irv was a pioneer who made significant contributions to the storied history and tradition of CBS Sports and, along with Phyllis George and Brent Musburger, set the standard for NFL pregame shows with The NFL Today. He was a true gentleman and a trailblazer in the sports television industry and will be remembered for his accomplishments and the paths he paved for those who followed.”

Though Cross was probably best known for his work on The NFL Today, he covered a variety of sports for CBS, calling NBA games, along with track and field and gymnastics during his 23 years at the network. He also anchored sports updates during broadcasts of college basketball, boxing, and other events.

Cross had plenty of broadcasting skills and versatility for CBS to utilize. He worked in sports media while playing for the Eagles, broadcasting drive-time sports reports on local radio and TV. (Cross was the first Black man to anchor TV sportscasts in Philadelphia.)

Irv Cross had one of the most memorable moments ever on a Super Bowl pregame show in 1984 for SB XVIII where he was doing a live shot on the sidelines and one of the heads of security wasn't too pleased with Irv being so close and let him know that while he was reporting pic.twitter.com/ompDaA79Zu

After leaving CBS in 1994, Cross worked as an athletic director at Idaho State, then at Macalester College in Minnesota. He remained in Minnesota, becoming the CEO of Big Brothers Big Sisters of Central Minnesota, and later did football commentary for Minneapolis’s Fox affiliate, KMSP-TV.

When CBS hired Irv Cross for “The NFL Today,” they tried to get him to wear a leisure suit and a medallion.

Cross said he’d take the gig if he could wear his normal sports coat. RIP. pic.twitter.com/eelVwykJtW

As could be expected, many of Cross’s colleagues in broadcasting and print media paid tribute on social media following news of his death. He was a major influence on many fans who grew up watching CBS’s NFL broadcasts and warmly remembered.

The Eagles are saddened to learn of the passing of Irv Cross.

RIP Irv Cross. Helped get me into the NFL when I was young, working The NFL Today with Brent Musburger. Little did I know I would also go to Northwestern, like them, and go on to love the NFL so much, like them. Still get giddy watching intro. https://t.co/ynC9nyde8O

RIP Irv Cross. Excellent corner for the @Eagles back in the day, terrific broadcaster for CBS. And a very nice guy to boot. pic.twitter.com/v0uGfI7017

Loved watching Irv Cross on the NFL Today when I was a kid. Sad to hear the news of his passing tonight.

A great photo of him, Brent Musburger & Phyllis George visiting Chris Berman, @TomJackson57 and our ESPN #NFL crew in 2009. pic.twitter.com/Kv1wp0EnDe

It was my honor to speak to the great Irv Cross last June for a story on how he and the equally great Sonny Hill–two Philly legends-broke down barriers and became trailblazing Black TV broadcasters for young kids like me. Rest in Power, Mr. Cross: https://t.co/OIOvr6KYuw

Especially in retrospect, it’s clear Irv Cross put the NFL in CBS’s “The NFL Today.” Phyllis did the best she could. Snyder gave off a faint aroma of corruption. Brent was, and is, embarrassing.