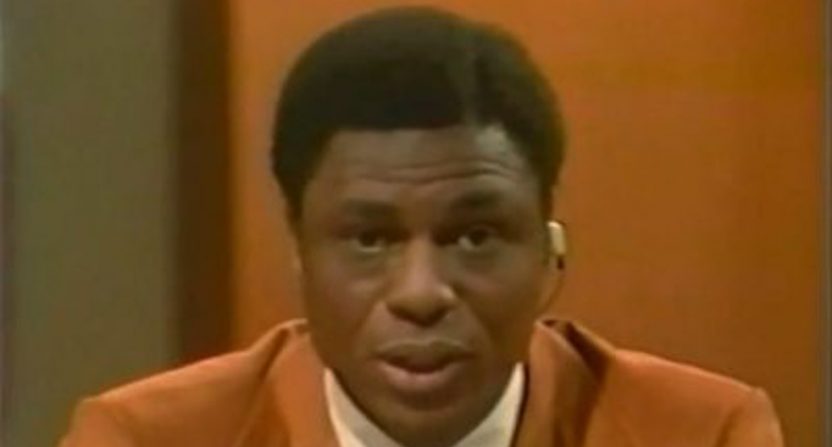 Irv Cross was part of a different era of the NFL and in sports television. Cross was a cornerback with the Philadelphia Eagles and Los Angeles Rams back in the 1960s when getting a concussion meant going right back into the game. And when he was part of CBS from the 1970s through the early 1990s, The NFL Today was required viewing for NFL fans who wanted to know the weather, analysis and injury reports.

Cross was an innovator, becoming one of the first African-American athletes to transition from a playing career to television. But now, he’s living far beyond the lights of the NFL and TV. After a high-profile life in the NFL, TV and as an athletic director in college sports, Cross is now living in Minnesota, and The Philadelphia Inquirer reports that he has been diagnosed with mild cognitive dementia.

Cross told The Inquirer he’s going to donate his brain to Northeastern University to test for CTE, the disease that has plagued several of his football brothers. He said “(CTE) has affected a lot of players from my generation. We didn’t think about things like safety.”

About his TV days, Cross says a Philadelphia TV sports director heard him speak at a banquet and offered him a job to do sports on weekends and while the director was on vacation. It eventually led him to CBS where he did analysis on NFL games and then in 1975, he joined Brent Musburger, Phyllis George and Jimmy “The Greek” Snyder on The NFL Today which was “must-see TV” for football fans.

He stayed with The NFL Today until 1991 when CBS replaced him with a different cast. But he stayed with the network to call games until he went to Idaho State University and then Macalester College in Minnesota as athletic director of both schools.

During his playing career, Cross suffered so many concussions during one season that his Eagles’ teammates called him “Paper Head.” Cross said so little was known about the effects of concussions that players would be sent right back into the game.

”…I had a helmet made with a little extra padding and played. I just tried to keep my head out of the way while making tackles. But that’s just the way it was. Most of the time, they gave you some smelling salts and you went back in. We didn’t know.”

Cross now is aware of the repercussions and says today’s players can’t adapt to the new rules of tackling and trying to keep their heads from making contact.

“I understand what they’re trying to do,” he said. “They say you’ve got to keep your head out of the vicinity of the play. But how do you that? I really don’t know how you’re supposed to make a tackle these days.”

As for the current NFL pregame shows, Cross doesn’t watch them.

“My wife keeps saying, `Times have changed, Irv. They don’t do things the way you did.’ But I don’t want to hear some guy say, `This is what I’d do.’ I don’t care. Tell me what the quarterback’s thinking.”

Cross certainly holds a place in NFL television history for his work in pioneering the studio analyst role. It’s unfortunate that like many players of his generation, he suffers from the same pains that have befallen them, but Cross refuses to be bitter. He discusses his career in a new biography, Bearing the Cross: My Inspiring Journey from Poverty to the NFL and Sports Television.