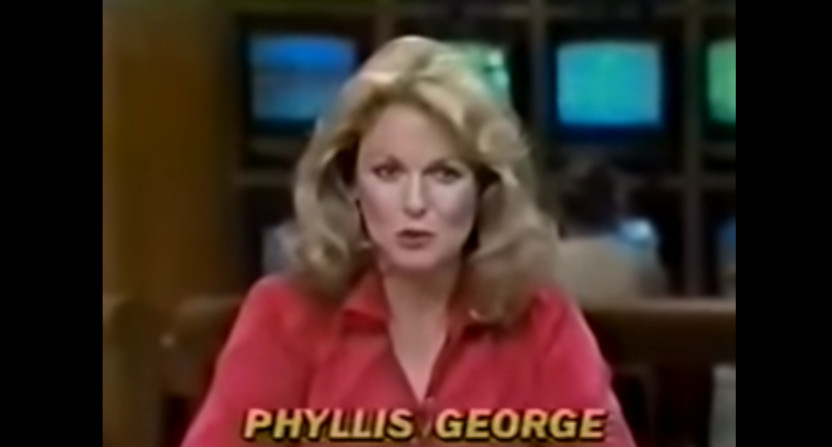 Phyllis George, one of the first women to regularly appear on a national sports show, has passed away at 70. As per Jack Brammer of The Lexington Herald-Leader, George died Thursday in hospital in Lexington, Kentucky, with her ex-husband John Y. Brown Jr. relaying that news to media Saturday. George had a remarkable career, from her time as Miss America to her crucial contributions to Brown’s successful 1979 campaign for Kentucky governor through her time with CBS News, the companies she later founded, and the books she wrote, but it’s her time with CBS Sports that’s most notable for this site.

George initially joined CBS Sports in 1974, then joined The NFL Today pre-game show in 1975, working with Brent Musburger and Irv Cross (Jimmy “The Greek” Snyder would join the following year). George worked on The NFL Today from 1975 through 1977, then again from 1980 through part of the 1983 season, and she also featured heavily on CBS’ horse racing coverage, including the Preakness Stakes and the Belmont Stakes. And she paved the way for many female broadcasters who followed in her footsteps. ESPN’s Beth Mowins spoke to Melissa Jacobs of TheFootballGirl.com in 2017, and said George was a key inspiration for her:

The NFL Today on CBS reigned king in those days with the sharp chemistry of Brent Musberger, Irv Cross and Jimmy the Greek, but it was the show’s reporter, Phyllis George. that provided Mowins’s ‘aha’ moment.

“There was a woman talking about football,” Mowins said. “That’s what I was drawn to. I like sports and like to talk so the two blended together perfectly.”

And Mowins is far from the only female broadcaster to take inspiration from George. ESPN’s Hannah Storm and Golf Channel’s Molly Solomon were among those who paid tribute to George Saturday:

Rest In Peace Phyllis George ????????. A true pioneer who approached her job with enthusiasm, empathy and humour. She was herself-charming and funny ..helped her audiences connect with some of the great sports figures of the day. Condolences to her family & all who loved her. ❤️

I saw a woman covering the NFL in 1975, and it made me dream of a career in sports TV. Phyllis George was the pioneer we needed. To those who gave her that chance, thank you. Disappointed I never met her and told her that she inspired my personal story. https://t.co/MIzHKEg4Yj

A tremendous loss for our CBS family. Remembering the The NFL Today of yesterday with our very first woman at the desk, Phyllis George ….the days of Brent and Phyllis and Irv. She inspired the dream for countless. Thanks for taking the seat at the table, Phyllis George. pic.twitter.com/Wt29q1tGGa

And here’s a statement from CBS:

George’s contributions to sports broadcasting will certainly be remembered, especially given the importance of The NFL Today at that time. Here’s an example of what that show looked like in 1981:

Our thoughts go out to George’s family and friends.

[The Lexington Herald-Leader; photo from Classic NFL on YouTube]