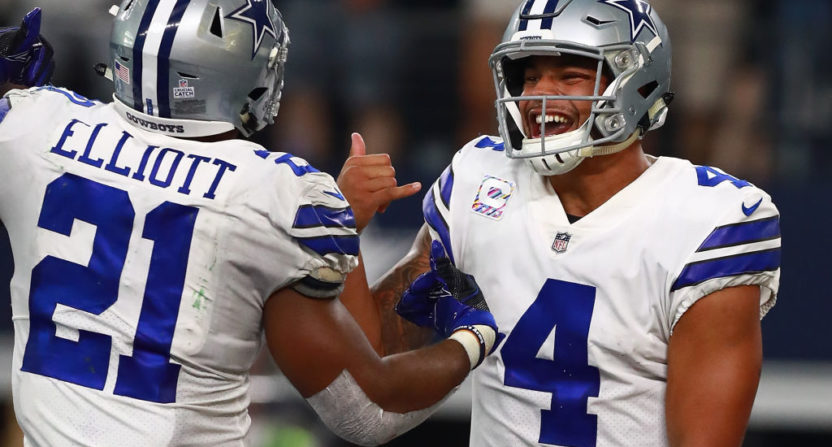 The latest on the CBS-Dish dispute that has seen the CBS broadcast network go dark on Dish in 14 markets across the country with owned-and-operated CBS stations, plus associated cable networks pulled from Dish nationwide, makes it seem unlikely a resolution will be reached ahead of Thursday’s Thanksgiving NFL game between the Dallas Cowboys and Los Angeles Chargers. That could be a big deal, as CBS stations in Dallas-Fort Worth and Los Angeles are affected by this dispute, along with stations in New York, Chicago, Philadelphia, San Francisco-Oakland-San Jose, Boston, Detroit, Minneapolis – St. Paul, Miami-Fort Lauderdale, Denver, Sacramento, Pittsburgh and Baltimore. (That represents TV markets #1-5, 8, 10, 14-17, 20, 24 and 26.) As Alex Silverman writes at Cablefax, CBS has said the sides are “far apart“:

CBS said Wednesday morning that it remains “far apart” from DISH Network in retransmission consent negotiations, raising serious doubt about the prospect of a deal getting done prior to kickoff of the net’s Thanksgiving NFL game. “As it stands, DISH customers won’t be watching CBS in the days and weeks ahead,” the broadcaster said in a statement.

CBS asserted DISH has been unwilling to “negotiate the same sort of deal we have successfully struck with its competitors.” The broadcaster did not provide details of what that would look like, but clearly expressed a belief that DISH is undervaluing its content. “DISH is saying it doesn’t believe CBS programming is worth the market rates we are seeking. Yet they have paid at least one cable network more than double our asking price, for far less than half the ratings,” the net said, presumably referring to ESPN.

DISH evp, marketing, programming and media sales Warren Schlichting told Cablefax on Tuesday that CBS is seeking “significant double-digit rate increases” for consent to continue carrying the flagship broadcast net. He also bemoaned the fact that CBS is also forcing DISH to carry its three cable nets, which he called a “tax.” CBS pushed back on that point in its statement, saying, “They currently have deals in place with a number of other broadcasters that have many more associated cable networks than we do.” Indeed, compared to the cable portfolios of NBCU, Fox and ABC parent Disney, CBS’ three-channel group is fairly compact.

Part of the problem there is that those CBS cable networks aren’t necessarily all that in-demand, though, which may be an element of Dish’s pushback here. The “double-digit rate increases” are probably an even bigger part of it, and the question there becomes if Dish can justify not carrying CBS, especially around big moments like the Cowboys-Chargers game. That game will currently be unavailable for Dish customers in both markets, and that may make a lot of people mad, especially if they had counted on watching football at family gatherings. And with the sides so far apart, this may not be solved ahead of Saturday’s Iron Bowl (No. 1 Alabama versus No. 6 Auburn), or ahead of Sunday’s regular NFL games. (And there are a whole lot of AFC markets involved here whose games will be on CBS.) There are options for those affected, including digital antennas (which Dish is offering to install for its customers) or signing up for CBS All-Access, but this is still something that could get in the way for a lot of planned football-watching. It will be interesting to see if that leads to pressure on either side to strike a deal. It will be also be interesting to see if this winds up affecting the ratings of this week’s games.