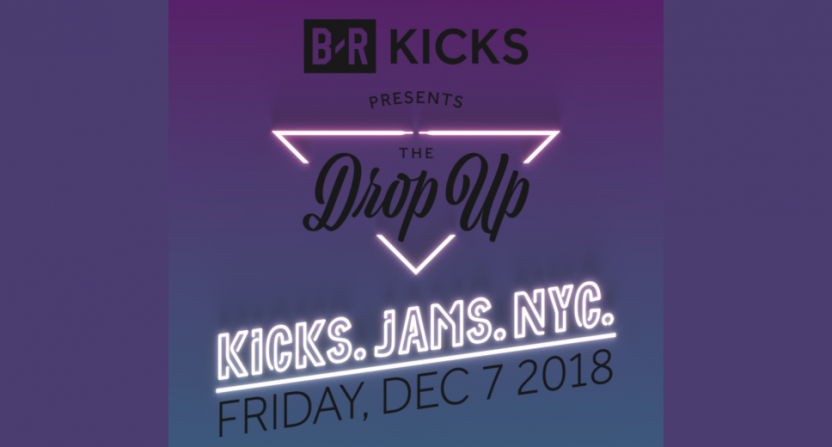 There’s a growing trend of sports media outlets expanding coverage into areas beyond the field, with coverage of athletes’ shoes and clothing particularly important there, and also a growing trend of media outlets hosting events. Bleacher Report has been doing sneaker and lifestyle coverage for two years under the B/R Kicks vertical and has also gotten heavily into events, doing six this year alone. The latest is Friday’s “The Drop Up” in New York City, which has a free fan experience from 1 to 9:30 p.m. and then a VIP afterparty, and is presented as a way for fans to experience some of the latest in sneaker culture. B/R chief revenue officer/chief marketing officer Howard Mittman spoke to Awful Announcing this week about this event and the larger strategies with B/R Kicks and events, and said their decision to get into sneaker coverage was because it seemed like something many sports fans wanted more of.

“About two years ago, we launched B/R Kicks, and I think undeniably we’d seen, I think a lot of folks had seen, the way this had sort of penetrated the world of sports. My belief, and I say this all the time here and we sort of think along these lines as a sensibility, is that the stadium tunnel is the new men’s runway. When you think about that, it gives you a sense of how the NBA has opened up the aperture on how American men think about fashion style, how sneaker culture drives that, how streetwear culture has evolved. And I think ultimately what we care about most is how fans are craving experiences, information and content about athletes that extends out beyond the borders of the court of play.”

“Kicks was developed to do that, to exploit that, and to, I hope, if we’re doing it right, to democratize that system so it doesn’t feel exclusive, so that it doesn’t feel like you don’t have to be an OG sneaker nerd to get it, to follow along with it. It is for fans of sports and fans of culture, and we try to deliver on experiences and hopefully unique content, in a world of commoditized content. We attempt to do both, and I think when we’re at our best, we do.”

Sneaker coverage is a crowded field, though, and Mittman said it can be tough to stand out from the pack. But their goal is to do so by focusing on coverage accessible to everyone, not just those who have been following sneakers forever.

“When I’m alone with my private thoughts, these are the things that I wrestle with most. What we try to do is think about being inclusive, being something that is continuing to grow, and we edit from the sensibility that everyone is a sneakerhead. Whether you’re my 71-year-old father who’s rocking Nike Monarchs or my 14-year-old son who’s begging his mom to take him down to the Supreme store, both real examples for better or worse, or, you know, me, who used to rock Stan Smiths, we’re all sneakerheads, we just come at it from a different angle. And I think what we’re trying to do is celebrate sneaker culture and streetwear culture through the lives of the athletes and the love that fans have for them, and I think that’s a bit of a different take than what I would consider to be the pre-eminent sneaker blogs. We try to do that in a way that doesn’t put a velvet rope up around it.”

He said events like The Drop Up are an important way not just to promote B/R Kicks, but to give their coverage a physical presence.

“We have a channel, a sub-brand, that is growing really healthily, and a seemingly insatiable desire from our fans to consume the kind of content that we’re delivering, and we have a growing and vibrant Instagram presence. Beyond that, over the course of this year, we’ve been investing in live events in a pretty significant way, and investing in what I like to think of as really taking the sneaker thoughts that we have in the virtual world, the digital world, and trying to transcribe that out back into the physical world. So we’ve been building these events to do just that.”

That then translates back into digital with their coverage of the event for those who can’t attend in person, and Mittman said that’s what makes B/R events (which B/R chief brand officer Ed Romaine cited this week as a key part of their 44 percent year-over-year revenue growth) stand out from others.

“What’s interesting about it is that it isn’t a one-way street; we’re trying to build a feedback loop, a bit of connectivity,” Mittman said. “Everything Bleacher Report does starts in the digital world, but the sole reason that we’re building physical experiences is not just to entertain the couple thousand people that will swing by over the course of the day, it’s to build out a social set that allows us an opportunity to create content experiences, to give that to the hundred-plus million that can follow along online. I think that’s a bit different that when you’re looking at traditional companies building events; they’re looking at gate, ticket sales, and very traditional metrics.”

“Of course those things matter to us at various points and times, but what I really want to do is build out this social sensibility that these events are steps, steps that are built and exist to capture content moments that can engage consumers that will never have a chance to go to the event through geography or something else. I like the sensibility of that, because for a brand like Kicks, when we’re doing our job right, it means that we’re shining a spotlight into a world that many of our fans crave but don’t live in themselves, and giving them a sense of what that’s like. Bleacher Report brings you exclusive behind-the-scenes access so that you’re one of the gang.”

As per The Drop Up itself, Mittman said there will be plenty of elements for attendees to check out (and it’s notable that special events like one-on-one master classes and the VIP afterparty will have some attendees selected to join, part of their goal of making this world more accessible).

“We have what we’re calling an elevated fan experience, so we have a sneaker customization lab with Mache and a one-on-one master class by sneaker designer UBIQ. We feel like The Drop Up is an interesting combination of elements; pop-up shops feel very 2010 to me and sneaker drops almost feel very 2016, but I think combining the popularity of them and creating a path forward for athletes and musicians to come together to see how the stadium tunnel has become the new men’s runway is exactly where we want to be.”

“We’ll also have art exhibits featuring the top 10 basketball kicks of all time, we’ll have what we’re calling a ghost sneaker selfie photo opportunity, and then we’ll have a variety of B/R Kicks customizable limited-edition products for sales. At night, in the after-hours portion, 10 o’clock on, we’ll have Sheck Wes, who is one of the hottest hip-hop artists on the chart right now, he’s on tour with Travis Scott, and he’ll be performing at the event for about 300 VIPs; celebrities, athletes, influencers.”

Mittman said the sponsorships here also illustrate that it’s not just about the bottom line (he previously told Variety‘s Todd Spangler that B/R Kicks will make “more money from the Drop Up event than it has in its entire existence”), but about partnering with companies that fit in this world.

“I’m proud of this not just because of the revenue. One of the things we really wanted to do when we built this was to make sure that we were moving forward with advertisers and partners that could add something to the experience and that felt organic and endemic to this world. It’s too smart of an audience to force-feed things in, so we’re pretty excited with who we’ve been able to select as partners.”

“adidas, they have the adidas N3XT L3V3L  sneaker that’s going to be the first-ever laceless basketball shoe from adidas, the world preview for that will happen there. Chivas is a sponsor and they’re doing a custom sneaker-inspired cocktail during the VIP portion, Levi’s is going to be demonstrating how to perfect the ideal jean lay based on your sneaker preferences, and we’re also doing a partnership with Twitter where there’s a digital wall featuring event-related tweets and selfies with fans. So each of those partners isn’t just a sponsor or a logo plate; we feel as if they’re adding to the event and collaborating with us to make the event better for fans.”

More information on The Drop Up can be found here.