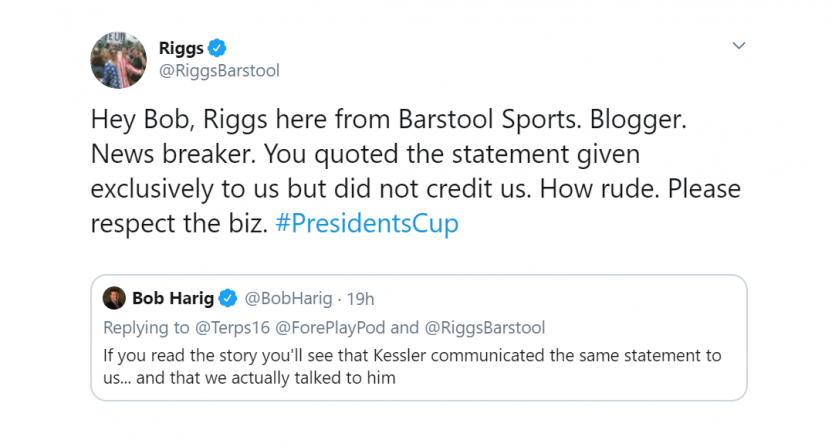 Yesterday, as Patrick Reed continued to be heckled in the wake of his cheating scandal, his brother-in-law/caddie Kessler Karain got into a physical confrontation with a fan at the Presidents Cup.

The only video that’s emerged is the aftermath, but clearly something happened:

Karain was not allowed to caddie today for Reed in the wake of the incident.

Statement from the PGA TOUR –

Following an incident that took place on Saturday at the Presidents Cup involving Kessler Karain and a spectator, Karain will not return to caddie for Sunday’s final-round Singles matches. We will have no further comment at this time.

Statement from Patrick Reed – “I respect the TOUR's decision. We are all focused on winning the Presidents Cup tomorrow.”

Karain released his own statement shortly after the incident a few media outlets who (obviously) came calling, and Barstool’s ForePlay Pod account tweeted it out first:

(A quick note: Karain essentially confirmed he assaulted a fan in his own statement, so there’s no real way to cover that one up at this point. Though today’s coverage of the incident on Golf Channel seemed to kind of try.) ESPN also got that statement from Karain, and went live with their own story.

As ESPN had received the statement via their own reporting (ESPN’s Michael Collins spoke to Karain as well), they didn’t mention Barstool’s tweeted statement. This didn’t go over well with Barstool:

Hey Bob, Riggs here from Barstool Sports. Blogger. News breaker. You quoted the statement given exclusively to us but did not credit us. How rude. Please respect the biz. #PresidentsCup https://t.co/iKKHcY6Ab4

After that things devolved into the typical Twitter fight over accreditation we don’t see quite so often anymore:

Hey Riggs, “Newsbreaker”, blogger: I’m on the phone with Kessler now… he gave it to me first… sorry. But when you respect the biz, start by asking your source if he is giving it to anyone else first. 😘 #PresidentsCupFromMyHouse #CaddieToCaddieFirst

I’m sorry, where in this tweet did you say first? And what did Kessler just say to you when he called you back? Or should we just “respect the biz” and you can apologize to @bobharig no harm no foul, I still got crazy love for y’all. #DoTheRightThing pic.twitter.com/K0GDSbA39g

Others were drawn in as well:

Yes. I got it first, Riggs and Fore Play Pod reported it first. We both got the exact same statement from Kessler. They are onsite and immediately released the statement. I am home in FL, text back and forth with K, then email chain w editor, @BobHarig , then back on phone with K

In the end, it’s kind of a silly point; Barstool got plenty of credit for being first, and ESPN did their own work. Let’s let a Twitter user sum it up well:

Still a nice get for them to receive the statement. Kudos to them.

It was good work to get the statement and get it out there, and outlets that aggregated rather than did their own reporting credited them appropriately, even if they didn’t at first. That’s a solid scoop.