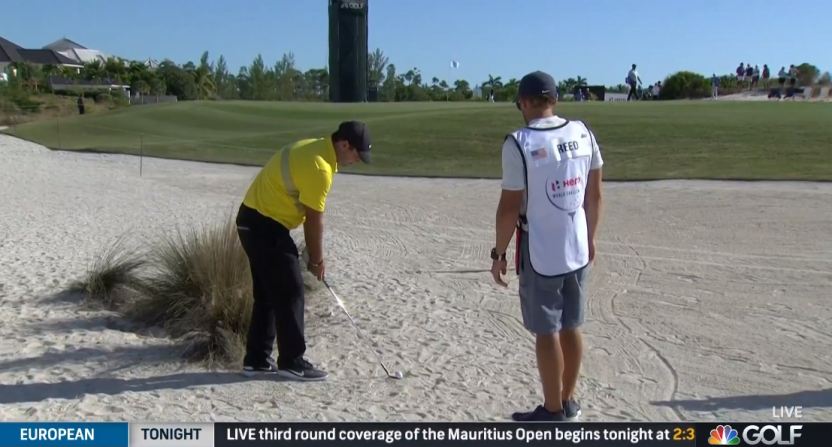 Stories of Patrick Reed’s cheating have followed him for pretty much his entire professional career, and they date back to his time as a college player. Shane Ryan’s book Chasing The Tiger recorded and reported the various allegations and incidents, which included stealing equipment from teammates at Georgia and falsifying scores during qualifying events at Augusta State.

Reed’s still never really shaken that perception, which isn’t exactly unfair. He never makes it easy on himself, from blaming equipment techs for his own poor play to begging for generous rulings he insists would be given to other players to throwing a Ryder Cup captain and plenty of teammates under the bus to a reporter. And this, too:

Sure would be interesting if getting caught cheating on camera followed Pat Reed more than saying “fucking faggot” on camera did.

Basically he’s an asshole, and if he were even 1% less good at golf he would be everyone’s least favorite member of a Cobb County insurance sales team and the bane of every chain restaurant employee within five miles of the office park. Instead, he’s a Masters winner.

This has all been a long setup ahead of today’s fiasco, wherein Reed was assessed a two-shot penalty for improving his lie in a waste bunker in the Bahamas at the Hero World Challenge, a limited-field, Tiger-hosted money-and-OWGR-points handout. It was blatant, too, and caught clearly on camera:

I'm dying at the idea that any Tour pro wouldn't notice catching sand not once but twice on a backswing, and then dying all over again when it's so obviously an effort to improve his lie, and dying a third time at his professed indignation. pic.twitter.com/SxblEXPYim

The ball goes from obscured to clearly visible, and that’s before Reed even dips back in for a second scoop. If you’ve played golf, you know that clearing out a different level of sand from behind the ball is an advantageous move, both for creating a path to a cleaner strike and for testing the firmness of the sand. You would also know there’s no chance he couldn’t feel it, no matter how fluffy the sand might be.

He’s shoveling sand here. At the very least he’d be able to see it; you can’t remove nearly an inch of sand without seeing it fly away, or noticing the landscape changes you’ve made after the fact. Which made Reed’s stance after the round that he felt as though the camera angle was misleading even more perfect.

Reed said he was at the front of a footprint, and the sand he took was at the rear of the footprint — thought if there was a different camera angle, he might not have been penalized.

Reed’s explanation that he’d done nothing wrong, and was the victim instead of a misleading camera angle (going so far as to claim that a different angle would have provided total exoneration), is incredibly on brand for Reed. It’s also bullshit; no player would risk moving sand or any other obstruction around directly behind the ball for fear of a penalty.

This was honestly so blatant that I just assumed this rule changed in 2019?

1. Somehow didn’t know that he couldn’t do that.

2. Wanted to cheat, and thought the best time to do it would be with a camera RIGHT THERE.

But even if you’re inclined for some reason to give Reed the benefit of the doubt (it’s unclear why, unless you’re the kind of person who answers blocked number phone calls with “Hello! Here’s my full name and Social Security number!”), video immediately surfaced of Reed doing the exact same thing at the exact same tournament in 2015.

It’s blatant cheating, caught on camera, just like today. He’s lining up in a bunker and sweeping back on his intended swing path in order to improve the lie. It’s what he does, among presumably dozens and dozens of other things cameras don’t catch or that former teammates weren’t dying to share with Shane Ryan in an effort to expose Reed.  He cheats, he lies about the cheating, he blames anything and anyone else for it, and watches as golf just kind of sweeps it all under the rug.

Here’s rules official Slugger White, for example, offering a eulogy’s worth of praise for Reed’s handling of the penalty discussion:

PGA Tour rules official Slugger White made it very clear to reporters that he was impressed with the way Reed handled his punishment: pic.twitter.com/AWpI6WrPMQ

These were Reed’s quotes after the fact, which amount to blatant lying considering all of the evidence and history:

“At the end of the day, you’ve got to let things kind of roll off your shoulders, and also at the same time I still have a whole other round to play tomorrow,” Reed said. “If I stew over something that I felt like I didn’t intentionally do, at the end of the day, it’s my word versus their word, and they weren’t standing there, they had a camera angle. So because of that, you know, you don’t really have a choice.”

Yes, another example of Patrick Reed the victim, this time of a misleading camera angle, doing the right and honorable thing by agreeing to go along with a penalty he clearly didn’t deserve. A role model for us all.