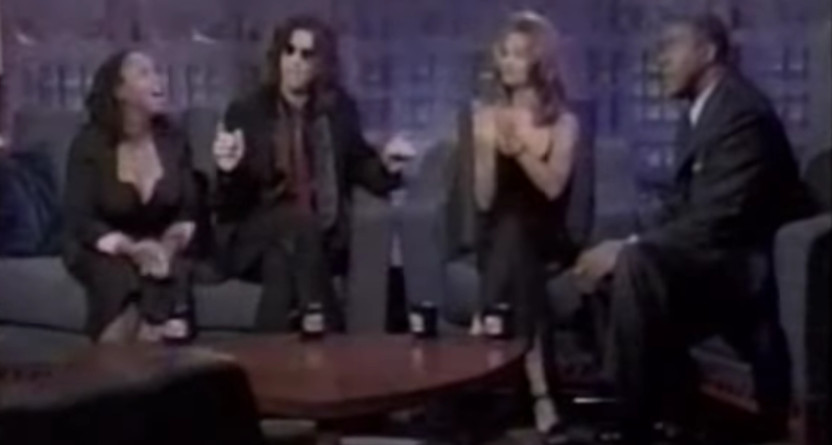 Earvin “Magic” Johnson has had a fascinating career, from Los Angeles Lakers’ star through talk show host and music mogul through TV analyst for Turner and ESPN through sports team ownership. That talk show element deserves some further discussion: Johnson’s initial The Magic Hour talk show only lasted a couple of months in syndication in 1998, but it produced its share of controversy. That was particularly true with an appearance by show critic Howard Stern, who told Johnson “I’m blacker than you are, trust me” and much more. Here’s some of that:

While The Magic Hour didn’t last long, Johnson’s TV career has endured well past it. In addition to his analyst work for ESPN and TNT, he returned to talk shows with Magic In The Making on his own Aspire Network in 2016. And he now has a four-part docuseries, They Call Me Magic, coming to Apple TV+ later this month. Around that, Johnson has been doing some interviews, including a notable one with Variety‘s Selome Hailu and Ramin Setoodeh. That one included some notable new comments on how Johnson felt about that interaction with Stern while it was ongoing. But first, it’s worth quoting some of the things Stern said there:

“The thing you need to work on, in my estimation, is that you’ve gotta stop trying to talk like the white man,” Stern answered. “Everybody’s anti-Ebonics. I say, let it fly! What you need to do, ‘my brotha,’ is to really get down with it. You talk Ebonics all you want.”

But Stern was only getting warmed up. “Listen, you’re a Black man. I grew up in a Black neighborhood,” Stern added. “I’m Blacker than you are, trust me. I’m the Blackest Black man you’ll ever meet. And I’m telling you right now, when I lived in Roosevelt, Long Island, which is a Black ghetto, everybody talked like this,” he said, before doing an impression of how he thought Black people spoke. “I was a big marble mouth, but it was fascinating, because I was one of the people. Why does everybody have to understand every word you say? Who cares what you got to say? No difference what you say.”

Stern eventually changed the subject to Johnson’s HIV status, which he’d disclosed at a 1991 press conference when he retired from the NBA.

“You had the life I wanted,” Stern said later in the interview, prodding Johnson about his sexual history before his diagnosis. “These were white chicks? Black chicks? What do we got? What did you prefer? You would have sex with everybody? At least you had fun getting AIDS.”

Johnson calmly corrected Stern, saying that he had HIV, not AIDS, and that “nobody has fun” contracting it.

“Believe me, brother, you did. It sounds like fun to me,” Stern replied.

…Johnson wasn’t Stern’s only target during his appearance on “The Magic Hour.” Stern also joked about losing games of basketball against “midgets.” And several times throughout the interview, he turned to Sheila E., the bandleader of the show, to comment on her breasts. “Sheila, you take off your top. Go kiss another girl in the band. Give us some lesbianism,” he said at one point.

And here are the new comments Johnson made to Variety on that interview:

“So many times, I wanted to say something and hit him at the same time — on air,” Johnson tells Variety, looking back at the interview. Johnson hasn’t spoken to Stern since then.

The show’s dismal ratings were the reason for Stern’s appearance in the first place.  Hoping to draw in more viewers, producers of “The Magic Hour” booked Stern, presenting the interview as an opportunity for Johnson to confront him — though Johnson now admits the interview happened against his will.

“I was mad when they booked him,” Johnson says. “But there’s nothing you can do. When people look for ratings, this is what happens.”

Johnson continued: “It is what it is. I learned a lot from that. I’ve never put myself — or HIV and AIDS, or my race — in that position again, ever again.”

Those comments are interesting, especially considering the discourse this week around if or when on-air violence is ever acceptable in response to criticism. (Thanks, Will Smith, who Stern has weighed in on at least twice.) And it’s probably smart that Johnson didn’t give into his desire to hit Stern on air. That’s an understandable reaction considering what Stern was saying, but the conversation around it would have gone very differently if Johnson had turned that into a physical confrontation. And that might have even altered Johnson’s career since then. Instead, he kept his cool, and things have worked out for him. But this is also notable for Johnson’s discussion of how Stern was booked as a confrontational guest against Johnson’s own wishes.

Trying to generate and/or capture confrontations on air often hasn’t gone well. That may generate some short-term buzz for a show, but that hasn’t often proved to help it in the long run. And it’s notable that another famous one involved a Stern-adjacent figure, with Artie Lange’s reign of terror on Joe Buck Live in 2009.  That was on the first episode of Joe Buck Live, and while Lange’s antics got press, the show did not benefit from that, and was cut after three episodes. (An interesting other example that saw an anniversary this week was Jim Everett v. Jim Rome on ESPN2 show Talk2 in 1994: yes, the show ran until 1998, but that incident didn’t really get Talk2 to take off.)

It’s also somewhat notable how so many of these confrontations have involved mostly-non-involved third parties. In this case, Playboy Playmate Karen McDougal, seen between Stern and Johnson at top, was playing the Braylon Edwards role (or the Paul Rudd/Jason Sudekis role) here. And maybe the lesson of the Johnson-Stern incident is that that was a producer-led booking disaster. But it’s also interesting to look back at what Stern said as recently as 1998, and to think about how things would go if he made those comments now.