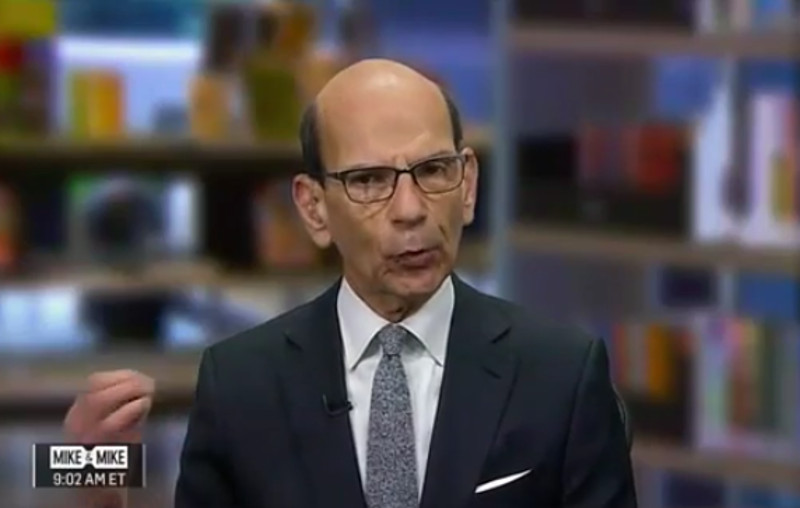 ESPN and SEC Network personality Paul Finebaum really, really doesn’t like the Michigan Wolverines or their fans. In February, Finebaum went after Michigan head coach Jim Harbaugh, calling him “the Donald Trump of college football,” and in September, Finebaum asked “Is there a more pathetic fan base in America than the University of Michigan? What a whiny and sniveling bunch.” In October, Finebaum called Michigan fans “some of the most unrealistic people that I’ve ever encountered” and said “When you win a championship, call me back.” He’s at it again; when Finebaum appeared on Mike and Mike (with guest hosts Jon “Stugotz” Weiner and Mike Golic Jr.) on ESPN2 Thursday, he once again decided to go blue:

This starts with Finebaum beginning his segment by asking unprovoked about “an alleged Michigan fan” who preceded him, saying “No way he’s a Michigan fan, because there was an ounce, a modicum of humility, and I have never met a Michigan fan that had an ounce of humility or didn’t think his team was the greatest of all time regardless of the record, especially since Jim Harbaugh has arrived, so that was a fraud.” Stugotz then asks Finebaum “Can we stay right there for a moment, what is the most arrogant fanbase, college fanbase in America?”

Finebaum answers “Well, as you know, doing a talk show, Michigan fans lately have been the worst, because they have won, let’s see, half a national championship in about 60 years, and they talk like they’re Alabama, Ohio State, USC, Oklahoma, Nebraska and Penn State wrapped into one. So I’m starting and finishing right there. A lot of people will come after SEC schools, and maybe I’m tone-deaf to Alabama fans because I lived in Alabama for 30 years, I hear that occasionally, but I’m pretty firm on Michigan. You’re not going to move me on this Thursday morning.”

Golic Jr. then goes “Paul, I couldn’t agree with you more, these Michigan fans out here trying to parade around like their program’s Notre Dame (his alma mater) or something,” and Finebaum goes “Oh, Notre Dame, I forgot them!” with a laugh, leading to Stugotz’s “Thank you, Paul, that’s where I wanted you to go!” But Finebaum then doubles down on Michigan: “Let me say this, Mike, I respect Notre Dame. I don’t respect Michigan. Notre Dame stands for something, Notre Dame doesn’t think it’s better than everyone else, because it has a record, it for the most part has stood on integrity and tradition. Michigan thinks it’s better than everyone else and I don’t understand why. It’s a good school, but it’s not Harvard, it’s not Princeton, it’s the University of Michigan at Ann Arbor. So I just get freaked out when Michigan fans walk around like they’ve done something. When Harbaugh showed up, it gave them a sense of entitlement that they really haven’t earned.”

He continued with a bit of a disclaimer on Harbaugh before diving back into ripping him and Michigan fans again: “Harbaugh’s a very good coach, he’s one of the best coaches in the country, but he’s yet to beat his chief rival, he’s yet to win a championship in two years. And I’m sure in two more years if he hasn’t done that, he’ll kick the lockers and walk out and go back to the NFL. But right now, to me, they don’t have a seat at the big boys’ table.”

Stugtoz then says “Who would have known that Vern being hypnotized would have led to Paul Finebaum just taking a sledgehammer to the University of Michigan?”, and Finebaum responds “Well, listen, I try to be real, and it’s always something with Michigan. They win half a championship, then they go through this variety of coaching changes, then they bring Harbaugh in and he goes crazy over the officiating. I feel sorry for the officials’ families in the bowl game Friday, because I’m sure he’s already researching them, trying to find someone to blame if the game doesn’t go his way.”

This is quite the diatribe on Michigan from Finebaum, but at least we can’t accuse him of being inconsistent. Finebaum seems to really, really dislike the Wolverines and Harbaugh. Maybe it’s for the reasons he claims, or maybe it dates back to Harbaugh not knowing who Finebaum was in 2015. Either way, it certainly won’t lead to Finebaum getting friendly calls from Ann Arbor any time soon.

As per the specific claims in here, Finebaum can find whoever he wants arrogant; that’s a subjective opinion. But his praise of Notre Dame is interesting considering how he said the Irish “sold their soul” just last month over an academic integrity scandal. And Notre Dame’s last title came in 1988; yes, they played for a championship in 2012-13, but lost 42-12 to Alabama, and they went 4-8 this year. It’s hard to argue they’re significantly more important over the last few decades than Michigan; yes, the Wolverines split the 1997-98 championship with Nebraska (the Cornhuskers were first in the Coaches’ Poll, while Michigan was first in the AP Poll), but that’s closer than Notre Dame got to a title, and Michigan’s also won or split nine conference championships since 1988 and was one of the top-ranked teams for a long while this year.

The Wolverines may not have achieved national titles with Harbaugh yet, but they’re not exactly irrelevant either. That makes it unclear why Finebaum’s so gung-ho on complaining about them. A feud like this is probably good for his ratings, though, and it’s certainly good for getting him in the headlines. Maybe that’s the point.