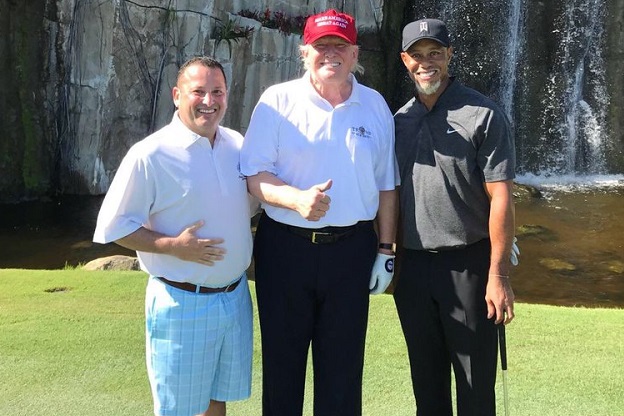 A few years back, Chris Broussard and his #sources were a hot topic around these parts. ESPN has gotten slightly better at actually crediting other outlets, online and traditional, but there’s always room for improvement. This week, we learned ESPN is far from the only place that sometimes struggles with proper attribution of credit.

As you may have seen, Tiger Woods teed it up with Donald Trump on Friday in Florida, a day after Tiger posted his shirtless “Santa” picture on Twitter. Here it is again, but it’s re-posted here to serve a purpose. Check the timestamp:

Xmas tradition that my kids love. Mac Daddy Santa is back! -TW pic.twitter.com/pCWZNNKPRG

Nine minutes later, this tweet from Golf Digest was sent reporting that Tiger would be playing a round of golf with the next President:

Tiger Woods to play golf with Donald Trump on Friday, according to source: https://t.co/TDZp7RfV2W pic.twitter.com/m5Z1qNADWr

It’s almost like Tiger was hoping to divert a bit of attention away from the Trump story. In any case, here’s how Golf Digest reported the news, in a story by Sam Weinman:

According to a source close to Trump, the President-elect is scheduled to play golf with Tiger Woods on Friday at his Trump International Golf Club in West Palm Beach, Fla. The soon-to-be 45th president and former World No. 1 are expected to play alongside two Trump International members.

A solid scoop for Golf Digest, to be sure, as that was destined to be big news. And it was! Outlets all over picked it up, including The Golf Channel, UPI, CNN, Golfweek, People, Business Insider, NESN, The New York Post, and plenty of others. ESPN and USA Today cited pool reports, so maybe ESPN still has a few issues to work out.

But here’s the thing: Golf Digest wasn’t the first to report the story:

Guys, I love you all dearly, but we had this 36 hours before GD over on @NoLayingUp. https://t.co/3fVE9wsll2

No Laying Up is a dedicated golf site. They’re not unknown in the golf world. One of their co-founders, Chris Solomon, covered the Ryder Cup for SB Nation. The No Laying Up podcast has boasted recent guests Jordan Spieth and Rory McIlroy. They’re a growing outlet, appealing to golf fans who don’t fit in the traditional demographics of golf media (there’s a reason a lot of ED or heart medication commercials include an appeal to check out their ads in Golf Digest).

They’re not necessarily anti-establishment, but they’re certainly not part of it. Maybe that’s why it’s taken time for some folks to properly credit NLU for breaking golf-related stories. You might remember recently when Tiger Woods signed on to play Bridgestone golf balls; the first inkling anyone had of that came from a No Laying Up tweet in October:

Hearing the following for Big Cat's equipment for the Safeway, FWIW:

Taylor made driver, mizuno irons and a Bridgestone ball.

But I'm very confident that Tiger is going to be using a @bridgestonegolf ball at the Safeway based on info I've received.

Tiger didn’t end up playing the Safeway Open, but he did indeed sign on to play Bridgestone balls. Recently, reports broke that Bubba Watson might be switching to Volvik balls, and while pretty much every outlet ran with a Korean newspaper report, NLU had that one first as well:

I've been told that Bubba will no longer be playing a Titleist ball in 2017, and will be playing Volvik colored balls. Can't make this up.

And on Wednesday morning, more than a full day in advance of the Golf Digest story, this post went live on No Laying Up via contributor Mattie Lou Chandler, with this headline:

It didn’t get a ton of play right away, but that was the story, definitively broken first. At least one major golf outlet, Golf.com, did properly attribute No Laying Up:

Two of the planet’s most influential people reportedly have a tee time together: Donald Trump and Tiger Woods.

According to a No Laying Up report, Woods and Trump will play a round together Friday afternoon at Trump International Golf Club in West Palm Beach, Fla. (A Golf Digest source later confirmed the report.)

Golf Digest had their name, and often a link back to their post, splashed across countless outlets thanks to their report. That kind of exposure and traffic could have served as a game-changing moment for a new media site like No Laying Up. Plus, obviously, it’s just not cool.

These guys get it.

It makes sense that this would happen in golf, where the game’s bent towards traditionalism tends to be reflected in how the sport is covered. Golf media has been slow to embrace changing trends, though sometimes that’s the fault of the sport’s governing bodies.

Just last year, Stephanie Wei lost her credential for using Periscope on the course during a practice round. New media is not embraced by the game itself, much less by the old media that is in semi-direct competition with emerging voices, sites, and outlets, many of which are much when it comes to things social engagement:

"Just swipe right. All of them." pic.twitter.com/hEql4FbT6P

That’s not to say there aren’t plenty of great people working at traditional media outlets, in golf specifically or in sports media in general. Because there are.

But this is a bad look for Golf Digest, and it’s not their only one lately. Remember the Paulina Gretzky cover? They were heavily criticized for that back in 2014, and then still decided to run the Paige Sprinac cover this year. It’s almost like they’re incapable of sensing a change in the marketplace, and reacting accordingly.

But hey, that’s never been a problem for print publications before. Surely they’ll be fine.