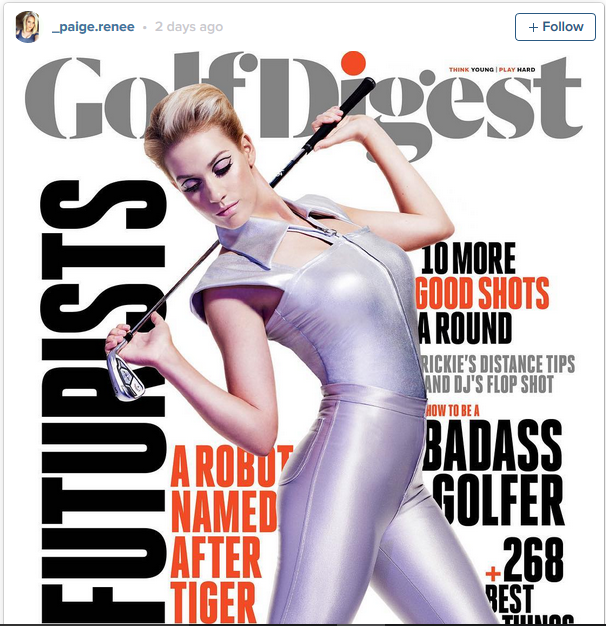 If you’re Golf Digest, you create controversy with your cover, whether that’s by featuring Paulina Gretzky instead of an actual professional golfer or having actual professional golfer Lexi Thompson pose topless. It’s what you do. Well, they’ve done it again, choosing to feature 23-year-old “social star” Paige Spiranac (in a tight silver outlet) on their “Futurists” issue over Lydia Ko, the 18-year-old who’s currently leading the LPGA rankings with $1,020,015 in earnings. Spiranac? She’s known for plenty of golf photos and stunts on Instagram, where she has over 670,000 followers, but wasn’t in the NCAA top 300 during her career at San Diego State, only made her professional debut in December at the Dubai Ladies Open thanks to a sponsor’s exemption, and shot 77-79-156 there to finish 101st in a 107-person field. Here’s the cover in question, from Spiranac’s Instagram:

I’m so honored to say that I’ve landed on the May cover of @GolfDigest! The issue has an awesome article about “Futurists” and how people today are changing golf. I know you’ll love it! Follow @GolfDigest and click on the link in their bio for your chance to win a signed copy! I also know I wouldn’t be in this position today without my social media family. Thank you to all the other accounts who have featured me before and those who follow. I honestly can’t believe how this has all come about but I appreciate the support and love more than you will ever know so thank you so much for everything❤️

Unsurprisingly, the decision to feature Spiranac instead of Ko has some LPGA players annoyed. Here are some of the comments they made to Golf Channel’s Randall Mell:

With Spiranac the featured model in Golf Digest’s package on “Futurists,” the “innovators and influencers changing the game,” LPGA Hall of Famer Juli Inkster noticed who wasn’t on the cover.

“You look at what Lydia Ko’s doing, and why isn’t she on the cover?” Inkster said.

Ko has yet to be featured on a Golf Digest cover.

“I know that stuff sells, and they are in the business of selling magazines, but I think people could learn more in an article about Lydia,” Inkster said. “It’s kind of where our society is right now. I don’t agree with it, but it’s their magazine and they can do what they want.”

Spiranac has built herself a substantial fan base, with 670,000 Instagram followers.

“All by herself, she has made golf seem at least slightly interesting to a significant number of people who never used to think about it at all,” Golf Digest wrote in a “Futurists” section about golf’s “changing paths to stardom.”

Stacy Lewis hadn’t yet seen the magazine Wednesday as she walked to her pro-am tee time, but she was disappointed to hear an LPGA player wasn’t on the cover. When Michelle Wie made the Golf Digest cover in October of 2014, she was the first LPGA pro to do so since August of 2008, when Lorena Ochoa appeared. Lexi Thompson appeared in May of last year with a towel provocatively draped around her neck.

“You look across other platforms, I feel like people are starting to take notice of us as players and us as athletes, but Golf Digest seems to be the anomaly,” Lewis said.

However, it is notable that Ko herself doesn’t seem too bothered here, and she had a friendly discussion with Spiranac:

@PaigeSpiranac you looked absolutely amazing on the cover!!!

@PaigeSpiranac I'm loving and enjoying every moment on tour 🙂

Still, it is disappointing that Golf Digest‘s “futurists” issue focused on someone who really isn’t accomplishing much in professional golf over someone whose dominance at such a young age is truly remarkable (Ko has nearly $6 million in career earnings.) Hopefully they’ll give Ko the attention and respect she deserves down the road. For now, it looks like they’re content to keep courting controversy.