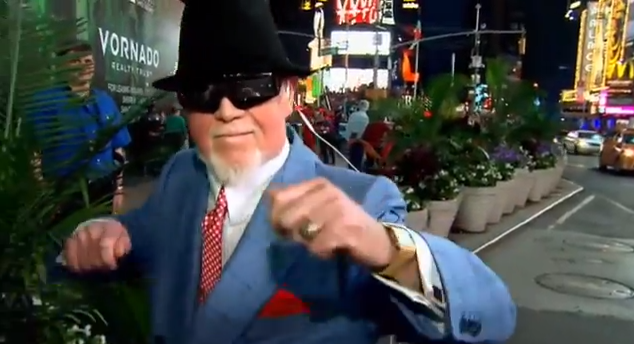 “Hockey Night In Canada” personality Don Cherry’s political opinions are often just as loud as his suits, whether he’s bashing Canada staying out of Iraq or blasting “left-wing pinkos” at Rob Ford’s mayoral election, and they’re sometimes as poorly-considered. His latest such effort on that front came on Twitter Wednesday in response to a “lone wolf” member of The Tenors changing the words of O Canada at the MLB All-Star game (which drew record ratings in Canada, a sharp contrast to the record low it pulled in in the U.S.) to include “all lives matter.” Like many Canadians, Cherry was pretty outraged by this. Unlike many Canadians, he said it would please “left-wing weirdo’s.” Here’s what Cherry posted to Twitter and a linked document Wednesday (consider this all sic’d):

How sad, my buddies and myself were all pumped about the All Star game. We settled in, had a few pops. We were so proud with all the Blue Jays there and of course Canadian Michael Saunders. We were proud that Canada was represented by all these players, especially Michael. It’s strange, I met these Tenors and they seemed like good guys. I told my buddies, “boy don’t they look good in their suits and ties, they will make us proud.” and then one of them did his thing with our anthem. Can you imagine what the American’s think of us now? We Canadians are taking the hit for that performance and it was done by an American. Oh well, all the left wing weirdo’s in this country are happy. But I do feel sorry for the rest of the Tenors. They will be noted forever, as “oh yeah, the Tenors, they’re the jerks that embarrassed us at the All Star game. Ah, they’re good singers but what a bunch of jerks.” It’s sad, it was only one, and it was done by an American.

There’s so much to unpack here, from Cherry using the hoseriffic “had a few pops” to the misplaced apostrophes to the repeated insistence “it was done by an American” (while rogue Tenor and noted flat-earther Remigio Pereira was born in Boston, traditionally one of Cherry’s favorite locales, he grew up in Ottawa), but the funniest part is the claim that “Oh well, all the left wing weirdo’s in this country are happy.” While there’s been plenty of criticism for Pereira’s change from across the political spectrum, many on the left wing have been particularly incensed given how “All Lives Matter” is often viewed as a right-wing reaction to and dismissal of “Black Lives Matter.”

Perhaps Cherry believes all anthem changes are equal, as there has been plenty of left-wing and centrist support for the currently-in-progress governmental bill to replace O Canada’s “in all thy sons” with “in all of us.” That’s a parliamentary and democratic process, a smaller change, and a very different result from this lone wolf’s efforts, though, and comparing them feels like a false equivalency. It’s also possible he confused “Black Lives Matter” (which does have plenty of left-wing support) with “All Lives Matter” (which has more support on the other side of the spectrum). Regardless of his thinking, Cherry’s certainly wrong that “all of the left wing weirdo’s” are happy about this. It seems he’s as well-informed about current political movements as he is about modern hockey.