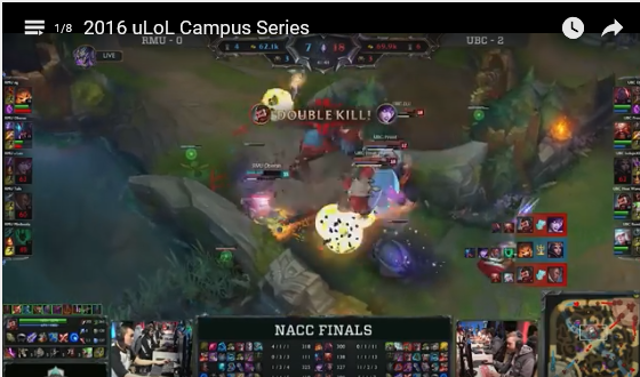 The world of competitive video gaming, or eSports, is thoroughly pervading the sports media world. We’ve already seen the launch of eSports verticals on sites like ESPN, Yahoo and The Score, plus Activision Blizzard’s acquisition of Major League Gaming and Turner/IMG’s creation and broadcast of the ELeague, and now even college-focused networks are getting into the game, with the Big Ten Network announcing Thursday that they’ll host and broadcast a League of Legends competition between students from Ohio State and Michigan State this weekend:

BTN and Riot Games today announced the BTN Invitational: A University League of Legends Event where two of the best Big Ten schools battle head-to-head in the highly-competitive online game League of Legends, the most played PC video game in the world. Ohio State will face off against Michigan State in front of a live audience at the widely popular video game event Penny Arcade Expo (PAX East) taking place in Boston from April 22 to 24.

“The Big Ten has some of the premier eSports teams in the country,” said Michael Calderon, Vice President of Programming and Digital Media at Big Ten. “The fast-paced, high-level competition of League of Legends is a great fit for BTN’s audience and we’re excited to be the first conference-owned network to bring the intensity of collegiate eSports to a television audience.”

The BTN Invitational: A University League of Legends Event will take place on Friday, April 22, from noon to 4 p.m. ET in the League of Legends show floor booth at PAX East. Fans can cheer for their favorite Big Ten team via livestream available on both BTN2Go and LoLeSports.com. Viewers can also watch the event at a later date on BTN at 7 p.m. ET on Monday, April 25.

“The Big Ten Network was ahead of the trend in recognizing the growing popularity of collegiate eSports and scholarship programs,” said Sean Haran, Director of Business Development at Riot Games. “There are over 300 University League of Legends campus clubs, including one on nearly every Big Ten school campus, so working with BTN to host an invitational event at PAX East was a no-brainer.”

In some ways, these college-connected eSports broadcasts might be a way to increase competitive video gaming’s audience and make it more TV-friendly. For those who have heard about these competitions and are curious about them, school ties (or hatred of a particular school) might appeal to them and help to bring them in the door in a way that tournaments between teams of pro gamers might not. Here’s a video promo with footage from some recent University League of Legends events:

Beyond the college connections, the advantage of a broadcast like this on a more-specialty channel like BTN is it doesn’t need to draw as high of an audience to be a success. If this live stream and later televised broadcast does better (after factoring in programming cost) for them than some of their typical programming, that’s all they need. While ESPN2’s similar Heroes of the Dorm broadcast of a Cal-Arizona State League of Legends competition last April was a ratings flop for that network with 96,000 viewers, that kind of audience would probably be a success for BTN Monday night programming, especially when it isn’t football season. Of course, they won’t necessarily pull that (especially considering that this is a rebroadcast rather than a live one, and that many of those interested will already have watched the stream or checked the results), but for right now, there is an advantage to doing this kind of programming on channels that don’t need a massive audience threshold.

The day may well come where eSports is drawing significant numbers on TV, though. While Rick Fox’s claim that they’ll be “on par with the NHL in two years” is patently ridiculous (and biased, considering that he’s an eSports investor), the amounts of big media companies investing in covering eSports and broadcasting it suggest it is going to continue to grow. There’s a substantial audience out there for these competitions already, and one that will likely only get larger as they receive more media attention. The challenge so far has been that the audience is largely engaging with them via streams or coverage rather than TV broadcasts, but that may change too. It’s easy to see why BTN is jumping on board the eSports train, and it’s probably going to work out decently well for them.