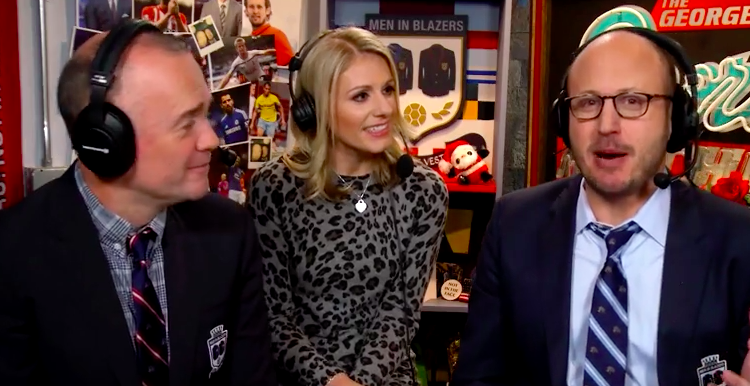 Televised soccer rights in America has been a fierce competition the last decade amongst ESPN, NBC, Fox Sports, and beIn Sport.  As soccer has “made it” as a sport of the present and not just America’s sport of the future (that’s now ultimate frisbee) all of these networks have wanted to get a slice of the proverbial pie.  The high stakes contest for soccer rights has really been unlike anything we’ve seen anywhere else in televised sports.  American soccer fans have more of the beautiful game than anyone else around the world.  Heck, we get to watch more of the English Premier League in America than they even get to do in England!  You don’t know just how good you have it, young millennial wearing that trendy Kun Aguero Man City jersey.

As we’re still riding the wave of the soccer boom, the bidding for the newest EPL rights contract was a watershed moment.  Would current rightsholder NBC be able to hold onto the EPL and keep their network invested in the sport?  Would Fox add to their growing portfolio that includes the World Cup, Champions League, and Bundesliga to ensure they’d be the #1 soccer network in the country?  Would beIn snatch the rights away and add to their lineup of international leagues to become a major player?  Or, would ESPN look to get back into the sport on a more weekly level and bring the EPL back to Bristol?

The result, as you may well already know, was NBC signing a groundbreaking six year deal with the EPL that reportedly nears $1 billion and doubles the rights fee of the last contract.  Soccer fans, and fans of great sports television, could not be happier.

Sports media is a very subjective industry.  The establishment may favor certain voices that the public has grown weary of hearing for so many years.  There may be cult figures amongst fans that aren’t quite as favored by their employers.  Two fans, two bloggers, two network execs can watch the same telecast and come to two very different conclusions about its quality.  There isn’t a clear win-loss dynamic to sports broadcasting, no goals to be scored, no games to be won.  And because it’s such a subjective business, it’s rare to find anything where most people tend to agree.

NBC’s English Premier League coverage is one of the rare exceptions – it is universally beloved by critics, fans, and everyone in between.  That’s why for as much as Fox has improved their coverage in the last year, and as great as ESPN is covering soccer (who doesn’t miss Ian Darke calling a game every week), NBC was where the wide majority of fans wanted to see the Premier League for the long haul.

NBC’s coverage of the Premier League may simply be the best coverage any network has of any sports league.  When NBC acquired the rights before the 2013 season, it assembled a cast of very talented, very smart, very likable personalities.  Arlo White shot to prominence at the 2012 London Olympics and was a great choice as an up and coming play by play man.  Analysts Lee Dixon and Graeme Le Saux are Premier League veterans who are as solid and steady as they come.  In the studio, the combination of Robbie Earle, Robbie Mustoe, and Kyle Martino provide thorough in-depth analysis that is always informative and free of the fake laughter or forced debate that you see so many other places in televised sports.  And host Rebecca Lowe is a star.  The next negative word said about Lowe will be the first.

That core has stayed together throughout the lifetime of NBC’s first three year run with the Premier League and has provided the perfect mix of insight and analysis.  If there was one place you could tick down NBC’s coverage after its first season in 2013-2014, the network could have used a little bit more humor and levity to even out the seriousness of the Premier League.  So what did NBC do?  They hired Men in Blazers to join the team to produce one of the most off-beat and laugh-out-loud funny sports shows around.  Roger Bennett and Michael Davies have become such a hit they’re now presenting the Running of the Bulls in the offseason.

Literally everything NBC has touched with the Premier League has turned to gold, but it’s not just the excellent talent the network assembled that makes the pairing such a perfect fit, it’s the way they have covered the league that should be an example for every other sports network to follow.

“It was very competitive and lots of interest but to continue with NBC, the clubs are very pleased. They have taken it, embraced it and taken it to new levels. Everything they have done, they have done with top class. We deal with broadcasters around the world and no one does as good job of promoting the Premier League as NBC does.” – Premier League chairman Richard Scudamore, via Sports Illustrated

The Premier League and NBC are such a perfect fit because NBC can provide the EPL with a depth of coverage that no other network could provide.  And really, the amount of programming NBCSN dedicates to the EPL on a weekly basis may be the most in-depth (outside of the NFL) across sports.

Think about it – if ESPN won the rights, EPL games would likely be relegated to ESPN2 on Saturdays and Sundays with the network’s football coverage throughout the fall.  Yes, soccer may be growing in popularity, but there’s no way ESPN is bumping college football out of their lineup for Bournemouth-Aston Villa.  In fact, ESPN reportedly didn’t even bid for Premier League rights this year because of their college football commitment on Saturdays.  The EPL would never be the most important sport at ESPN and although there’s no doubt it’d be excellent coverage, it’d be a big step back in exposure.  Even though ESPN has a ton of networks, the EPL would still struggle to find room on the schedule.

Fox Sports would lessen some of those problems, but there would still be complicated scheduling dynamics.  For starters, Fox begins their Bundesliga coverage this year, and one would think the Germans might be disappointed to learn they were suddenly playing second fiddle to the EPL.  Given so many of those games air opposite one another, there would be a loser.  Furthermore, with the distribution woes facing Fox Sports 2 and Fox forcing fans to pay a premium for Fox Soccer 2 Go, fans would lose out big in EPL availability.  The games you used to watch for free on Live Extra would likely have a price at Fox.  Furthermore, although Fox’s soccer coverage made significant gains during the summer, it’s still not at the level of NBC.

beIn Sport should be mentioned as well because they made a bid, but the channel isn’t well distributed and again would be an extra cost for a lot of fans.  Although the thought of Ray Hudson calling Premier League games is tantalizing…

NBC is the only network that can do what they do with the Premier League.  They have the available airtime, they have the commitment, they have the distribution channels.  What other network would be able to show not one but two episodes of Match of the Day in the evening?  What other network could devote themselves fully to the league?  For EPL fans, it’s the perfect setup.  NBC makes every single Premier League game available to fans through NBC Sports Live Extra.  And as long as you already have your cable or satellite subscription, it’s absolutely free.  The game you wanted to see wasn’t televised?  No problem, all you have to do is fire up the iPad.  When it was first announced in 2013, it was a revolutionary step in sports broadcasting and a major advance of the digital era.

And for NBC, it makes sense as well.  NBCSN has grown into a nice role in the sports media world where they can go all-in with a few tentpole sports and win fans over with high quality, high volume coverage.  NBCSN isn’t trying to be ESPN.  For the sports they do have the rights to though, like the EPL and NHL and Olympic sports, they’re going to do everything they can to give it top billing.  EPL on NBC feels like a big deal because the network makes it feel like a big deal, not like an afterthought.

And that leads into the last point, what makes NBC’s coverage of the EPL so exemplary is that they cover the entire league.  It’s not just the Big 4 or the title hunt, NBC covers the newly promoted teams and the teams in the relegation battle throughout the season as well.  Because the network makes every game available, they give credence and importance to every game.  Unlike what we see on ESPN with the Lakers and Knicks dominating the NBA, or the Yankees and Red Sox being the only two MLB teams that exist, NBC covers the Premier League as a whole.  What a novel concept.  You’re not going to see Wayne Rooney tweets ad nauseam like you would LeBron James, either.