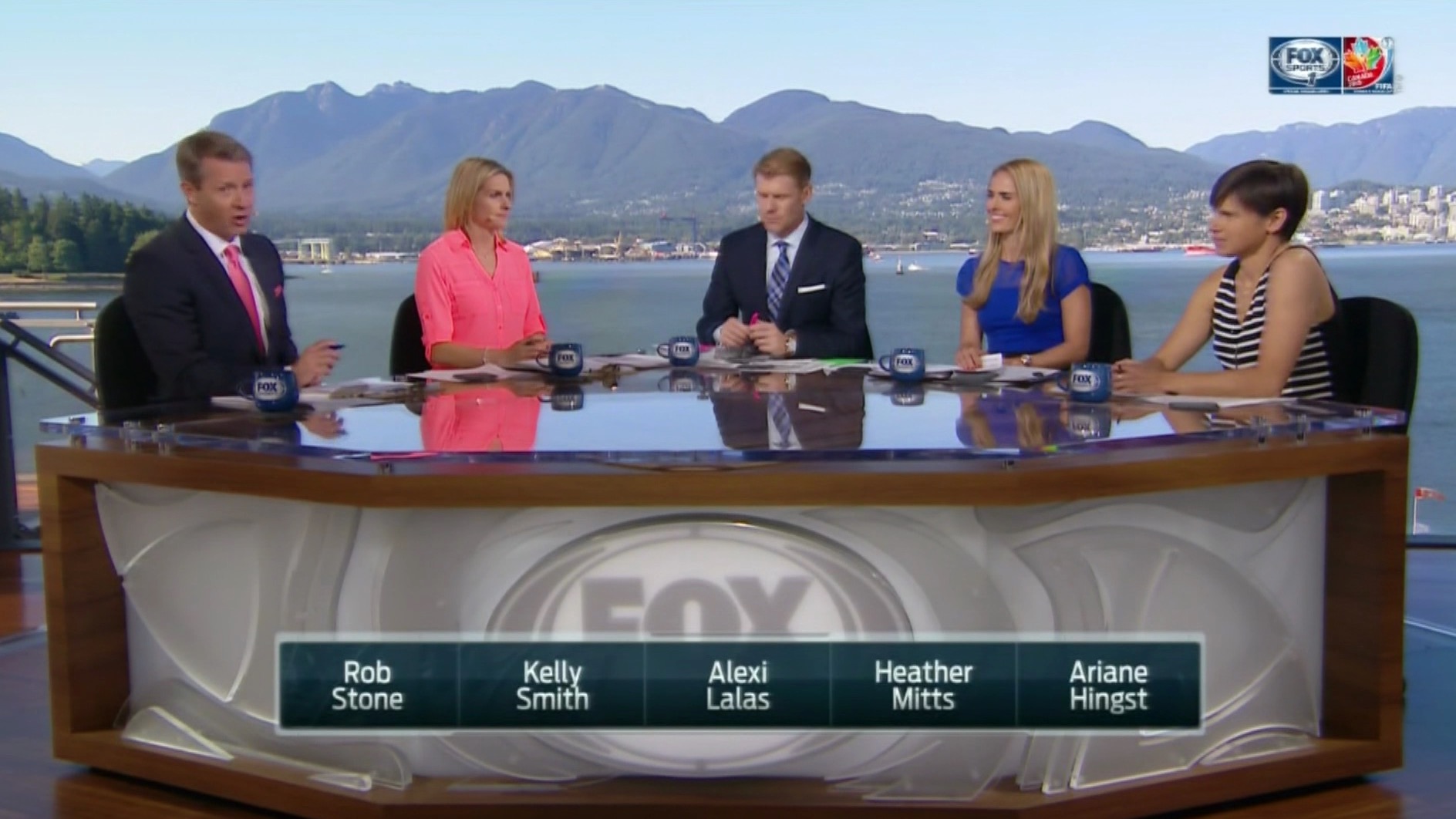 As the FIFA women’s World Cup draws to a close with the United States getting another crack at winning the title, Fox got exactly what they wanted this summer. Had the United States been eliminated in the quarterfinals to China or semifinals to Germany, the ratings for the World Cup final would be disastrous for Fox.

Now, with semifinals viewership near eight figures, Fox can ride that momentum into the World Cup final to continue to boast record numbers for women’s soccer in America.

In other words, Fox is going to beat ESPN and they’re going to make sure we know about it. (It’s worth remembering the United States v Japan had 13.4 million viewers on ESPN and given the increased interest level in soccer in America, the holiday weekend and time the match will be on, it’s hard to believe that number won’t be surpassed.)

Fox has had an interesting summer so far, led by mostly negative reviews of its U.S. Open golf coverage and mostly positive reviews of the World Cup effort. While you can certainly question the promotion the tournament has been getting compared to the ESPN promo machine—why was the second semifinal match on Fox Sports 1 and not Fox, for example—the on-air coverage has been very solid. 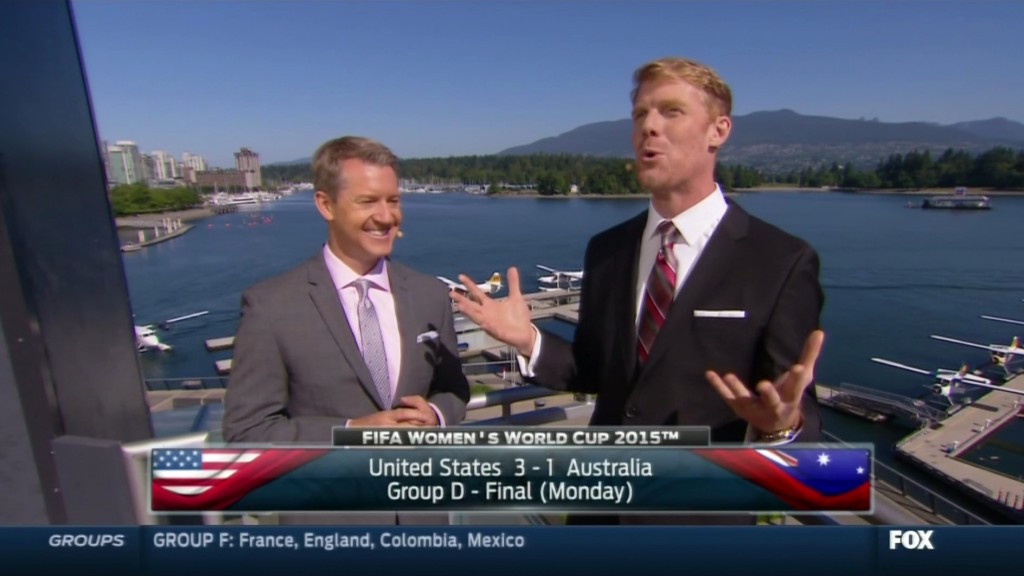 Opinions on who has been the most solid will obviously differ based on what you’re looking for in coverage. If casual fans want a strong take from a recognizable face that’s easy to understand, then Alexi Lalas has been winning this World Cup. If you want a solid and dependable play-by-play man who won’t get too excited and will let his analysts do their jobs, JP Dellacamera is tops on your list. If you want in-depth analysis, international perspective, big game experience and critical player evaluations, there are a host of former women’s players Fox brought in to give you that.

To me, there haven’t been too many misses on Fox’s long list of talent. Early in the tournament the use of Leslie Osborne and Angela Hucles seemed redundant on their main set with Heather Mitts sitting as the lead U.S. Soccer analyst. While I felt Hucles added more gravitas with her studio commentary early in the tournament, it was clear Mitts was brought in to be the lead voice of U.S. Soccer on that set—other than Lalas, of course­—so there was no way anyone was booting her. The same goes for World Cup Tonight host Kate Abdo, who has been consistently relegated to the evening recap show more than expected, at least by me, if not by Fox.

So everyone has been good. Everyone. And also Wynalda has been there too. There have been a few stand-out stars during this World Cup run for Fox. Here are some of those names at each position. (You decide if it’s a 4-4-2 or a 4-3-3 when I’m done.)

(most of) Your crew for the next few hours here in Edmonton #FWWConFOX pic.twitter.com/SoO8vl4EIk

While Fox put JP Dellacamera on all the U.S. women’s matches, including the World Cup final, Strong has been tabbed as the de facto voice of Fox’s soccer coverage for the men’s national team, as well as a lead voice for MLS. It was odd that Fox didn’t have Strong in a more prominent role during this tournament, but his workload doing other non World Cup matches may have precluded his involvement otherwise.

Strong did not call a semifinal for Fox, nor is he calling the third-place match, but his call of the England-Canada semifinal with Danielle Slaton was without question the best telecast of the tournament to date.

Someone at Fox had to listen to that call and quietly laugh, remembering the nascent days of Fox’s pre-World Cup coverage when Gus Johnson was billed as the voice of American soccer. Then that someone probably grabbed a photo of Strong and hugged it.

Fox made news with their all-woman team of Jenn Hildreth and Kyndra de St. Aubin—who did a fine job with the second semifinal on Fox Sports 1—while Justin Kutcher and Aly Wagner were assigned the third-place match on July 4.

Fox seems to love Kutcher, certainly more than I do. He’s a solid play-by-play voice, but seemed unfamiliar with calling soccer, routinely cutting off his analyst or sideline reporter in order to scream about a potential scoring chance. At times I caught him mentioning having played the game as a kid, which seemed like an odd way to come off as both relatable and knowledgeable at this level. He’s certainly the next rising star at Fox, and he’s probably great on other sports. Strong has shown he’s great on soccer, and let’s hope Fox realizes that for the next three years as well.

I’m going to be completely honest and this may sound terrible but don’t blame me, blame Fox: the analysts they hired to call games are largely indistinguishable during matches. Given that most of the names—and voices—are unfamiliar to the average American sports fan, it’s hard to know who is calling which game. The male voices calling the matches are familiar, including Tony DiCicco who calls the U.S. matches and other marquee games with Dellacamera and Cat Whitehill.

DiCicco has been good, and the interaction with Whitehill hasn’t been a distraction, but that doesn’t mean it’s necessarily working either. His personality as an analyst is dominant, which renders Whitehill far less of an authority on those broadcasts than she should be.

When Whitehill has time to talk she has been solid, but it’s been a balance that hasn’t helped either shine as much as Wagner has.

The fact is, Wagner has stood out because she was paired with Kutcher, putting her in the exact opposite situation as Whitehill. Wagner can play the expert the entire match and shine because Fox put her with someone newer to the game. No one on the Fox game crew has been poor. Wagner, just by nature of circumstance, stands out the most.

The role of a sideline reporter in soccer is often so insignificant it’s not worth sending someone to a match, but Jenny Taft has done a nice job of adding useful information on the United States matches and her pre- and post-match interviews are well executed and thoughtful.

Julie Stewart-Binks deserves some kind of award for most miles traveled and most matches worked because she’s absolutely everywhere. She was at the second semifinal with one crew before working to the third-place match (note: both in Edmonton) with another crew. She called the Germany-France quarterfinal match with the same crew she’ll work the third-place match the day before calling England and Canada with a different crew. In the round of 16, I’m half convinced she worked seven of the eight matches.

A native of Canada, Stewart-Binks has had the chance to see a whole lot of her country this month. She deserves some respect for that. And a vacation.

For all the United States matches and many of the other major match windows, Fox stayed with the reliable quintet of Rob Stone, Kelly Smith, Alexi Lalas, Heather Mitts and Ariane Hingst. All were incredibly solid throughout the tournament—yes, even Lalas—and added something different to each telecast.

I am no fan of a five person set, and I truly think that Lalas should have been the odd man out, but Fox wanted some bigger name recognition on the stage and there’s not much reason to disagree. For most matches, Lalas barely gave any analysis other than his cliché’d “set pieces” comment and over-the-top proclamations about losing being a failure and winning being the greatest thing ever.

I was impressed by Mitts as the tournament went along. She had a disastrous start to the month in her awkward explanation of the Hope Solo situation, trying to spin the story into a positive for the U.S. team. Someone must have gotten in her ear, because as the United States moved along in the tournament, Mitts has been more critical when needed and has shown a solid ability to analyze the action.

Our own Andrew Bucholtz noted that Hingst, “was particularly strong: different opinions and unique takes without trying too hard to create controversy.” Maybe it was a language barrier for me, but I found Hingst struggling to come up with the right words time and time again. Given how many other strong voices were on that panel, she had a tendency to give up on points in an effort to move the process along.

Smith did anything but. While occasionally stumbling over her presentation of analysis, Smith showed how well she understands the game, and presented points with conviction and authority. Smith was an excellent hire by Fox, so good that they should think about incorporating her into their regular studio show for UEFA Champions League, Europa League and other international competitions. I have no quibble with Warren Barton, but Smith could take the “resident English voice” on that panel any day.

Hell, smack a sweater vest on her and call her Wynalda and the entire viewing public will applaud.

As good as Smith has been, the best part of the entire Fox telecast this month has been Stone’s ability to present an event that’s wholly unfamiliar to most American fans and make us feel welcome. Stone’s smile is genuine and welcoming, and he has the professionalism as a host and presenter to handle a four-analyst set with aplomb.

The stars of the 2015 FIFA Women’s World Cup on Fox have been the ladies in the red, white, blue, black and slime, but the guy who has made himself more fans than anyone else has to be Stone. Give that man a trophy on Sunday too. Or at least a spare sweater vest.