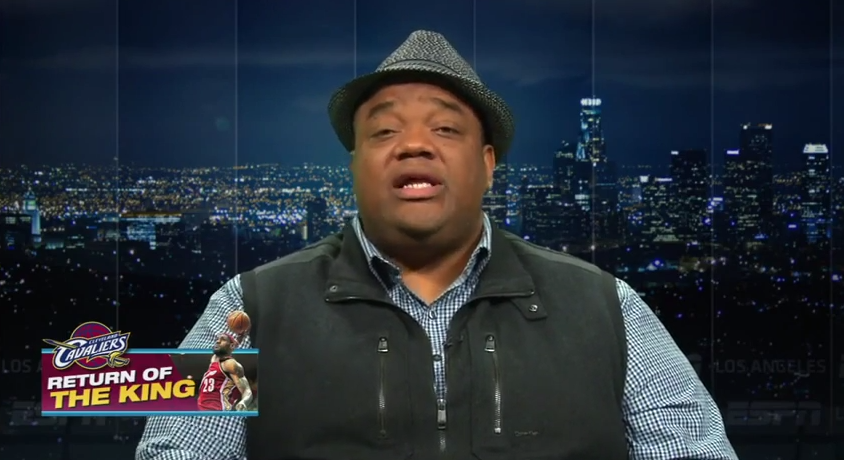 Now that he’s moved from ESPN to Fox Sports, Jason Whitlock is taking plenty of potshots, but not just at his former employer. While he didn’t offer much in the way of serious criticism of ESPN or others much on-air with Colin Cowherd Wednesday, Whitlock has been more willing to fire away online, both on Twitter and now at his new j.school site. His intro post from Tuesday night is a long, Wire-reference-heavy discussion of “The Explanation 2.0” to come, but his second post, put up Wednesday, is much more specific. It’s a diatribe against “Deadspin’s gang of angry white hipsters, its token black mascot and the writers piggybacking Deadspin’s narrative while avoiding he said-she said.”

In particular, it’s an attack on Greg Howard, author of much of Deadspin’s reporting on The Undefeated, who Whitlock calls ” Deadspin’s black mascot, a clever, updated Jayson Blair.”

Whitlock especially disputes the opening narrative of Howard’s 10,000-plus-word June 10, 2014 piece that blasted his early moves at The Undefeated, offering his own record of calls and texts between himself and Howard. Here are some of the key points Whitlock makes:

Howard ramped up his assault on my character on June 10, 2014 with an 11,000-word narrative that started with 848 words based on a fabrication.

He built the entire premise of his longform piece(s) about me and “Black Grantland” on a breathtaking lie.

He wrote that on Saturday, Feb. 8, 2014, while fighting for his life in an Arizona hospital, I called and berated him for the better part of an hour because I was upset about a piece he published on Deadspin two days before. …

As promised, Howard called me. During our phone conversation, I was firm, direct and polite with my questions. He said he was a lifelong Redskins fan, Griffin was his favorite player and all he wanted to do was criticize me for not being more sympathetic toward the other issues limiting Griffin’s success. He claimed Tommy Craggs and Tim Marchman, his editors, injected the racially inflammatory narrative into his story. He said he feared pushing back against their edits because he did not want Craggs and Marchman to suspect he wanted a job with me and ESPN, Deadspin’s enemy. I countered, if true, they were using him and his black skin to cowardly lob attacks they do not have the courage to attach their names to. They were using a 25-year-old black fan to attack my character. I was confused and disappointed. I marinated.

That’s highly excerpted, as Whitlock also offers what he says is a record of previous calls, e-mails and texts between them. However, Whitlock doesn’t really seem to have a smoking gun here; his recollection of that conversation and the one Howard opened his piece with are phrased, framed and outlined very differently, and perhaps his will win him some sympathy in some corners, but there don’t seem to be any particular factual discrepancies between the two accounts, or anything that really calls Howard’s reporting into question. In particular, Howard says in his own piece that they discussed which lines were his and which were his editors, and that he spent most of the Feb. 8 conversation apologizing, both of which fit with Whitlock’s narrative. The comparison of him to serial plagiarist and fabricator Jayson Blair seems a little farfetched, at least with the evidence Whitlock’s provided so far. Also, Whitlock reveals later correspondence between him and Howard that shows substantial effort by Howard to try and get his comments for Deadspin’s April piece on The Undefeated.

While Whitlock may not have landed many blows on Deadspin so far, he’s definitely swinging, and that in itself is interesting. Why now? As he writes at the end, “The obvious question to ponder is why would I wait until October of 2015 to present these facts about Greg Howard. ESPN asked me not to comment on the story. I respected that request then. I now have a new employer.” Thus, Fox appears to be fine with him firing away here. Whitlock says there’s much more to come, and it’s going to be interesting to see what that is. The Whitlock blasts at Deadspin and ESPN appear to have just started.