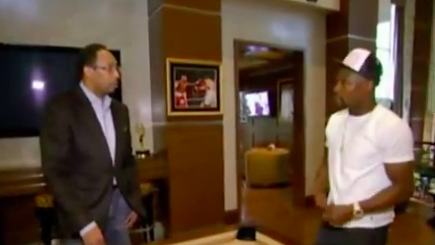 There’s an ongoing identity crisis at ESPN between serious sports journalism and everything that doesn’t meet that standard (whether that’s embracing debate or puff pieces), as we saw again this week with the radically different ways the network’s shows covered Tim Tebow. Perhaps even a better example of ESPN’s journalistic dilemma is their SportsCenter coverage of an exclusive interview with Floyd Mayweather Jr. ahead of his fight with Manny Pacquaio next week.

The series has been so positive, and has gone so far to avoid the serious questions about Mayweather’s record of assaulting women, that Deadspin’s Timothy Burke wrote ESPN is “serving as Floyd Mayweather’s PR mouthpiece.” What’s particularly problematic is their choice of interviewer: Stephen A. Smith, who is as far from a hard-hitting journalist as you can get and has his own history of problematic comments about domestic violence. The kid gloves ESPN is using to handle Mayweather stand in stark contrast to the excellent work the company’s done on domestic violence in other forums, and they show off the worst side of the Worldwide Leader.

It’s tough for sports fans and viewers to reconcile ESPN seemingly insulating Mayweather on one show and then confronting reality with him on another.

To be clear, this isn’t to say that every question to Mayweather needs to be about his domestic violence record. He’s a legitimate news subject thanks to his upcoming fight, and asking questions about that is important to viewers. However, ESPN also should be presenting Mayweather in the full context of his past, and that’s something they’ve failed at spectacularly in the series of vignettes with Smith. This is particularly blatant in a segment of the interview where Smith claims to represent Mayweather’s critics, but only talks about how he spends his money. Raising that as the only objection to Mayweather helps improve his profile and diminish the legitimate criticisms of him. Compare that to, say, former ESPNer Rachel Nichols’ 2014 CNN interview with him.

ESPN isn’t required to go full Frost/Nixon on Mayweather in every piece they do, but this kind of soft-soaping for a really big feature, then trying to make up lost ground later on, doesn’t make the network look good from a journalistic standpoint.

What’s unfortunate is that malfeasance of this level hurts the rest of the work ESPN does, much of which is very good. On the domestic violence front alone, consider Don Van Natta Jr. and Kevin Van Valkenburg’s groundbreaking September investigation of the “purposeful misdirection” by the Ravens in the Ray Rice case, or Sarah Spain’s 2014 ESPNw commentary that called for a boycott of Mayweather’s fights. Look at Keith Olbermann calling for Roger Goodell’s resignation, or later upping that to a call for the NFL to fire him.  Consider the phenomenal Outside The Lines investigation by the Fainaru brothers on the NFL’s lack of enforcement of its domestic violence policies over decades. Even this week, the network’s had strong commentary on the domestic violence suspension handed down to Cowboys’ DE Greg Hardy, such as this piece from Jane McManus. The upcoming OTL show on Mayweather would be expected to fall into that category too.

Of course, ESPN has had other slips in the past too, including that infamous Smith incident on First Take, so it’s not like the Worldwide Leader has been perfect aside from this week’s Mayweather coverage. Generally, though, ESPN has produced excellent journalism on a wide variety of fronts, including domestic violence. Said excellent journalism is often overshadowed by the latest problematic bloviating from Smith, Skip Bayless or Colin Cowherd. The Mayweather features are particularly bad, with several voices rightfully criticizing ESPN for their pillow-soft coverage.

Yes, Stephen A. Smith, the main criticism of Floyd Mayweather is that he's "bad at spending his money." Thank you for your journalism.

I see Stephen A Smith & Floyd Mayweather talking on tv right now. Or am I just having a nightmare?

Floyd Mayweather and Stephen A. riding around in an SUV debating Jordan vs. LeBron seems to be yet another new low for the mothership.

What this speaks to once again is the identity crisis at ESPN, caught between hyping the shiny parts of the sports culture – celebrity, debate, access versus hard journalism and hard questions. Here we have the same athlete and one ESPN personality plays a de facto promoter while another will do a serious inquest into his past. It’s confounding that ESPN has to pull in Outside the Lines to ask the questions Stephen A. Smith didn’t ask.