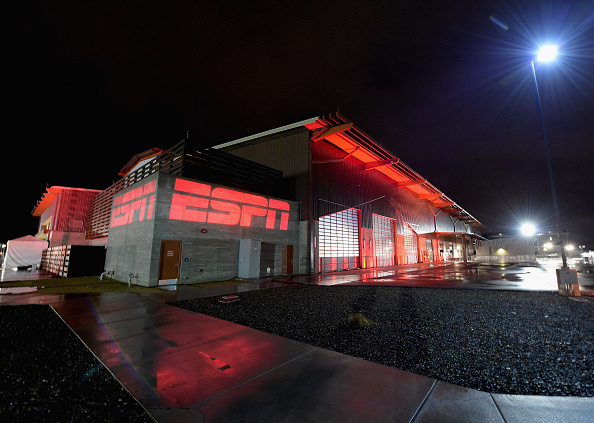 The realities of ESPN’s layoffs are undeniable.  Hundreds of employees were given the axe last week and no matter how much ESPN can try to rationalize it with words like “efficiency” and “transition” and “organizational changes” it can’t fully mask the truth that these are some dark days in Bristol.  The layoffs led to rare instances of both current and former employees speaking out in support of those who were let go, many of whom longtime and high-ranking staffers.

How did we get here?

ESPN is in this predicament because of soaring rights fees and lost subscriber revenue.  In other words, the walls are closing in on both sides.

We’ve talked numerous times about the explosion of rights fees that is making life much more difficult for ESPN and all the sports media companies.

Why, just the increase in the rights fee to the college football playoff (+$483 million annually) would be enough to cover what ESPN needs to cut over the next two years.  It may not be a one-to-one comparison, but we’re seeing the price ESPN is paying not just in dollars, but in human resources too, to have the right to televise those three games.

Add on top of that the roughly $800 million extra ESPN has to pay to the NFL and the NBA each in their new rights deals taking effect and we’re talking about an extra $2 billion that ESPN has to come up with somehow just in those three contracts.  That’s not to mention what ESPN may have to pay the Big Ten coming up or the other smaller increases for sports like MLS and other conferences.  It’s insane.  Add in everything else that’s on this list from SBJ’s John Ourand and it comes to $2.8 BILLION in increased fees from new deals signed over the past few years.

But on the other side, ESPN is also being hurt by lost revenue from cable and satellite subscribers from people cutting the cord or reducing their cable packages down to the bare minimum.  It’s not as much as the increased rights fees, but it certainly has an impact.

In Ourand’s great piece from this week talking about the financial realities ESPN is facing, he wrote this about ESPN’s diminishing subscriber base (bold emphasis added):

ESPN’s business model — the dual revenue streams of advertising revenue and affiliate fees — always has been its strength. It still is. But that model has had some challenges, mainly due to a decision ESPN made several years ago that has come back to hurt it. ESPN had several cable carriage renewals in 2012, including big ones with distributors Comcast, Cablevision and Cox.

At the time, ESPN wanted to increase the license fee distributors pay it to $6 per subscriber per month. So its executives cut deals that made sure that ESPN and ESPN2 would be on the highest-penetrated tiers of service — expanded basic. At the same time, ESPN lowered penetration benchmark levels from more than 90 percent of all subscribers to a number closer to 80 percent.

“That’s part of every cable negotiation I’ve done,” said one industry executive. “If you want to negotiate a higher rate, you have to have more flexibility on penetration.”

Over the ensuing few years, cable operators discovered the low-cost, skinny bundles and started marketing them without ESPN. Expanded basic still is the most popular tier, but the mini-tiers without ESPN have been gaining traction. As a result, ESPN wound up with a rate that was higher than they thought they would get. But they left themselves more vulnerable to subscriber losses than other cable networks.

ESPN’s subscriber losses, which have seen it lose nearly 8.5 million homes in the last 4 1/2 years, according to Nielsen estimates, or down about 8 percent, are at a rate that is declining faster than the rest of the industry.

“It’s not cord cutting; it’s cord shaving,” said one executive familiar with ESPN’s strategy. “ESPN is losing subscribers at a faster rate than others.”

If you go inside the numbers, you see the damage this cord shaving and cutting has done to ESPN’s business model.

ESPN currently charges over $6 per subscriber per month for you to be able to watch the channel on cable or satellite.  It’s basically five times as expensive as the next most expensive cable channel.  The ability to print money from subscriber fees and the dual revenue stream is one of the chief reasons why ESPN became the global conglomerate it has become.

If ESPN has lost an estimated 8.5 million subscribers, let’s do the math:

It’s just an estimate, but ESPN is losing $612 million annually in subscriber fees from where they were just over 4 years ago.  When you add that to the additional $2.8 billion that ESPN has had to dish out in rights fees, suddenly ESPN’s bottom line has suffered an approximate $3.5 billion annual hit over the last four years.  And again, that’s using numbers that are conservative estimates.

(*It should be noted that this is compared to where ESPN would be hypothetically with no subscriber loss.  With their increasing rate from year-to-year, ESPN makes more money over time even if subscribers dip, but this number is relative to where ESPN might expect to be without cord shaving or cutting.)

When you crunch the numbers, it’s no wonder ESPN is in between such a rock and a hard place with so many difficult decisions to make.  We’re looking at a calendar year where ESPN chose not to renew several high-priced multimillion dollar talent in front of the cameras and let go hundreds of employees behind the cameras.  In the land of live TV rights, ESPN gave up the British Open a year early to NBC and going back further, we know they lost the World Cup (a prized asset to John Skipper) to Fox Sports not too long ago.

I don’t want to sound too “gloom and doom” over these numbers because if there’s any company that can find a way to make up $3.5 billion it’s ESPN.  (To lay people like you and me, that sounds incomprehensible and not within the boundaries of the known universe, but this is the upper echelons of corporate America.)

This being ESPN, the network will survive, and probably continue to thrive.  And if they really are restructuring things to make sure they can stay on top through the digital age, Bristol will still be set up for success in the long run.

But in the short term, these numbers show the true reality to the tight spot ESPN finds itself in, and just how high the walls are to try to climb out out it.