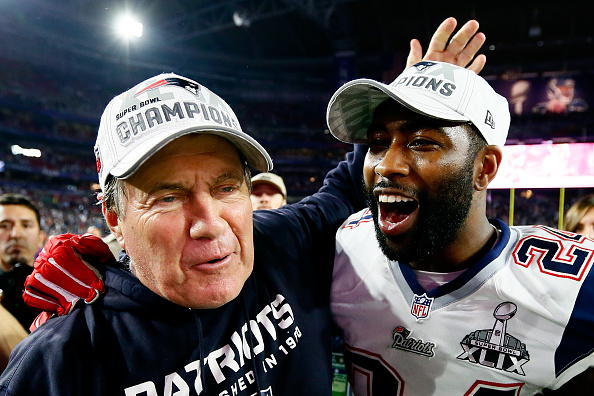 If you’re going to drop a huge story that you hope dominates a weekly news cycle, the morning after Labor Day is a great time to do it.  And when that expose is related to the biggest story in sports (DeflateGate) and comes two days before that team’s first game of the new season as defending champions, there’s going to be no way to escape it.

ESPN and Outside the Lines released one of their trademark deep digs into the New England Patriots, DeflateGate, and even SpyGate this morning in a calculated launch across all of ESPN’s platforms that will take full advantage of the ESPN Echo Chamber.  Included are several damaging new allegations, including that the Patriots actually had people break into locker rooms and hotels to steal play sheets in addition to other more general spy work.

There are plenty of candidates to choose from, but the biggest headline from the piece might just be the belief that DeflateGate was what one owner described as a “makeup call” for Roger Goodell and the NFL badly botching SpyGate and actively covering up just how bad it was in the face of a congressional investigation:

The widespread perception that Goodell gave the Patriots a break on Spygate, followed by the NFL’s stonewalling of a potential congressional investigation into the matter, shaped owners’ expectations of what needed to be done by 345 Park Ave. on Deflategate.

It was, one owner says, time for “a makeup call.”

The Patriots immediately responded, blasting ESPN and even citing a recent apology coming out of Bristol where they referenced a false report tied to SpyGate and Super Bowl XXXVI.  They didn’t really respond to OTL’s report specifically, though, which is an interesting PR tactic…

Here is the statement the #Patriots issued in response to today's ESPN report. Strong stuff pic.twitter.com/NPAAAmcz2M

So what in the world are we supposed to do with this now?  Here’s the major takeaways on where we go from here…

1) We had thought that with Week 1 finally in view on the horizon and Tom Brady’s suspension lifted that we were past the DeflateGate drama.  This ESPN report puts an end to that notion very quickly.  Not only that, but it brings back the SpyGate episode to the surface and will lead us to re-debate and re-analyze an NFL scandal that took place during the George W. Bush administration.  The new details that emerge are equally and incredibly damning for the Patriots, Goodell, and the NFL.  If you were fed up in hearing about DeflateGate, you may want to take a well-timed late summer vacation.

2) This report should only give further credence to the truth that Outside the Lines is one of the most important entities at ESPN.  The reporting done by Don Van Natta and Seth Wickersham is incredibly in-depth as the pair talked to 90 (!!!) sources relating to this story.  Last fall in the wake of a similar investigation into the Ravens and their handling of the Ray Rice controversy, former ESPN ombudsman Robert Lipsyte called the report and the network’s overall coverage of the story “ESPN’s finest hour” of his tenure.  After years of bouncing back and forth between ESPN and ESPN2, OTL thankfully has a new permanent home on ESPN moving forward.

3) ESPN has made their fair share of questionable decisions when it comes to valuing debate and sensationalism over facts and journalism.  But in the midst of those very well deserved knocks, even ESPN’s staunchest critics have to admit that the network puts more resources into hard-hitting investigative journalism than maybe all of their competitors combined.  John Skipper could have easily squashed this report with all of its damaging allegations towards Goodell, the NFL, and the Patriots, but he didn’t.  It shows ESPN still has some regard for important work like this.

4) With that said, ESPN is fighting an uphill battle.  Interim ESPN Ombudsman Bill Simmons tweeted about “sour grapes” in relation to the report, which is very similar to what every other Patriots fan in your timeline is tweeting about.

Not sure what to make of the sour grapes stuff. Sure seems like everyone who ever lost to 2001-07 Pats now has a built-in excuse for failure

It’s not just Patriots fans though, ESPN has to convince the general public that they have the goods.  After Chris Mortensen’s widely-publicized failures in reporting the DeflateGate scandal, ESPN needs to go the extra mile in earning the trust of the sports fan.  And really, this is what we’ve been saying for years – it all comes together under the four letters.  If we can’t trust Chris Mortensen to report good information and he’s one of the faces of ESPN Insiderdom, it’s much more difficult to ask the average fan to trust anything else that comes out of ESPN.

Those of us who are very much into the inside baseball life of sports media may be able to compartmentalize the difference between Mortensen and Outside the Lines, but most ESPN consumers won’t bother to do so.  With ESPN’s high-profile blunders throughout DeflateGate (and noting even OTL’s celebrated Ravens report had a couple holes in it), ESPN and OTL better hope that every one of their i’s are dotted and t’s crossed because their reputation when it comes to breaking news depends on it.

5) In the end, this is what journalism is supposed to do – isn’t it?  Make us rethink what we thought we knew about something.  Suddenly it all makes sense why the NFL would come down so hard on the Patriots for something so trivial like slightly deflated footballs.  Some of you may still be reading through the OTL report and who knows what will ultimately come out of this, how much will stick, and how much will be shot down.  It’s still way, way, way too early to know what exactly the fallout will be and whether this will go down as a defining report on Goodell’s NFL and the Patriots or whether it will be another example of Robert Kraft and Bill Belichick being made of teflon.  But ESPN has led us to re-examine not just one, but two of the biggest scandals in NFL history with one article today.  That in and of itself is quite the accomplishment.