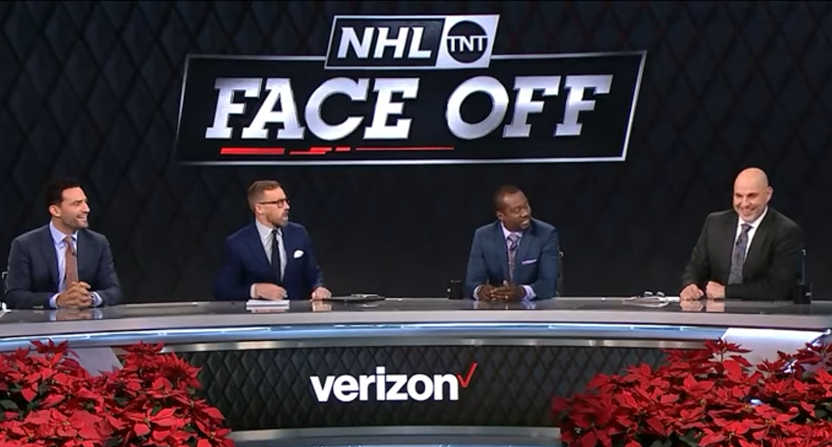 It’s the second season of NHL on TNT coverage as part of Warner Bros. Discovery’s NHL deal. Their regular-season coverage includes 62 games; that includes each Wednesday night (including the Pittsburgh Penguins and Buffalo Sabres tonight at 7:30 p.m. ET), quite a few doubleheaders, and some games on other days, including the Winter Classic on Jan. 2. And their NHL Face Off studio panel of host Liam McHugh and analysts Rick Tocchet, Anson Carter, Paul Bissonette and Wayne Gretzky (who isn’t there every week) has gotten into a sophomore groove, as they discussed in a media call last month.

Some particularly interesting chemistry there is between Tocchet and Carter (seen at right and center-right above respectively). Those two overlapped as NHL players, with Tocchet playing in the league from 1984-2002 and Carter playing from 1996-2007  (before finishing his playing career with Switzerland’s HC Lugano in 2007-08). And they were even involved in a trade for each other, although neither was the headliner. That would be Adam Oates, who was sent with Bill Ranford and Tocchet from the Boston Bruins to the Washington Capitals in 1997 in exchange for Jim Carey, Jason Allison, Carter and two draft picks.

Following that trade, Tocchet and Carter had their paths diverge a bit, but they both were involved in the NHL for most of the time since. After retiring as a player, Tocchet went into coaching, starting as an assistant with the Colorado Avalanche (in 2002-03), then working with the then-Phoenix Coyotes (where Gretzky was the head coach), the Tampa Bay Lightning (including as an interim and then full head coach), the Pittsburgh Penguins, and the Arizona Coyotes (where he was the head coach from 2017-21). He did a little bit of broadcasting on the then-Comcast SportsNet Philadelphia’s Flyers’ coverage in the early 2010s, but went back to coaching before too long. Meanwhile, Carter has been working in broadcasting on a regular basis since joining NBC in 2013. And Tocchet said broadcast veterans like Carter and McHugh have helped him and Bissonette settle in.

“I’m the rookie, along with Biz here, on the TV part, so we rely on Liam and Anson a lot. The creativity of the guys, that’s the one thing, whether it’s a week before, or in the summer, or even on game day, something might come up, and one of the guys is like, ‘Hey, let’s try this.’ We’re not scared to try things. And that’s obviously from the company we work for. They want that, they welcome that, they don’t want you to be overprepared. And I think that’s a big part of why this is kind of successful. ”

Carter said when he first met Tocchet while training together in California as players, he was intimidated by him.

“I was afraid to talk to Toc, because we used to train together in California. And we joke about the hairy eyeball he gives people on set all the time, but Toc was like one of the most intense people ever as a player and as a trainer. And myself being a young buck now coming in to the league, being out there in California and watching the Chris Chelioses and Rick Tocchets train and seeing how focused they were, I was always a little hesitant to say anything. I always stayed out of his way. I didn’t want him to smack me in the head with a dumbbell.”

He said he’s still impressed by what Tocchet has accomplished.

“But to see him progress as a world-class player who I think should be a Hall of Famer, 400+ goals, 3,000 PIMs, and then he coached and won Stanley Cup championships too. If you talk to anybody who’s played in this league in the same era that we played in, you’re not going to find one person saying bad things about Toc. He was a tremendous teammate on the ice, and I’m finding off the ice, he’s an even better teammate in studio with us.”

Tocchet responded to that by saying he owes Carter dinner for that praise, and for helping him get through his rookie year as a national TV analyst.

“Man, whatever you want, Ace, when we’re in Colorado, any dinner you want, it’s on me, buddy. Geez, thanks a lot. I think the big thing for me with Anson and the relationship, especially last year, getting closer, coming in here as a rookie, I really relied on him and Liam. They made me feel comfortable right from the start. You’re nervous, right, when the cameras come on? They would tell you to relax, ‘Don’t worry about it.’ How many times you hear the countdown, and you start getting a little nervous, and they say ‘Don’t worry about it, tell that story, it’s not a big deal.'”

“That’s what I really relied on with those guys the most, especially Anson, sitting beside him where he can save you once in a while when you stumble a little bit. The relationship grew because of that, I think. It’s going into a scrum or a pile to protect your teammate, and back in the day we used to do that a lot, it’s no different from those guys doing it for me. They’re coming in to help you, you’re not on an island.”

“So that’s what the relationship with me and Anson is, I’m not on an island when I’m on that set. And I owe him a lot when it comes to that. It’s hard, it’s hard, you’re nervous, especially your rookie year, and he’d relax you and say ‘It’s not brain surgery,’ you know the game, tell some stories, just relax.’ And that has helped me definitely stay afloat on the set.”

Carter said he appreciates the unfiltered perspective Tocchet and the other panelists bring.

“With people like Toc, and Biz, and Liam, and Gretz when he’s on, they’re able to present their authentic selves. None of it’s rehearsed. That’s what I like the most about it, because it’s fresh. If you rehearse, you’re practicing for some of these shows, but your first take is usually your best take, and it usually goes downhill from there. That’s one aspect I really like about our show.”

And Bissonette said Tocchet’s known for both his on-camera and off-camera video breakdowns around the set.

“I look forward to hearing Toc break down certain plays, certain videos. And even just hanging out with him, Liam and Ace in the back, I learn things every day about ‘This is what should happen in this situation,’ whether it’s power play or penalty kill. We’re just going to try and bring that enthusiasm to the broadcast, because every one of us cares.”

As for Gretzky, Tocchet said the biggest thing with him is that he doesn’t want to be seen as above the others.

“I’ve known Wayne for 30 years, and Wayne’s the same thing when he played. I remember getting traded to LA, and these new guys come in, and the first month or two, they’re scared to be around Wayne Gretzky. At the beginning, they used to talk to me and ask ‘What do you know about Wayne,’ this and that, and I’d say ‘He wants you to chirp him, he wants to be just one of the guys.'”

“Like the sweater-vest [in the rafters when Gretzky is there], Liam said ‘Hey, let’s do the sweater-vest.’ And maybe the first week he didn’t want to do it because he’s nervous, he’s Wayne Gretzky. And Ace would debate him, ‘I disagree with Gretz,’ or Biz, ‘I disagree with him.’ Yeah, he’s the king, but he doesn’t want us to kowtow to him and just ‘Hey, whatever he says, he’s right.'”

“I think what makes Wayne such a fabulous guy is that he wants to be just one of the guys, and he’s not always right. He doesn’t want guys just hanging around him laughing at his jokes when the jokes aren’t funny, because I’ll tell him that. I remember hanging out with him, and he’s got some guys there, and he’ll say something not funny, and guys will start to laugh, and I’ll go ‘It wasn’t that funny.’ That’s the transition with our panel; he’s one of the guys, the guys love him, and Wayne loves this panel, he feels like he’s family. We all protect each other, we’re not going to put anyone on an island, but it’s okay to disagree with him.”

As for that panel, McHugh said he’s excited to see its continued growth this season.

“I think what we want to do is take what we have and continue to mold it. I don’t think we’re trying to reinvent anything. I enjoy the passion that these guys continue to bring, and I just want to continue with that. …I want organic disagreement. I want guys to give their honest opinion, and I know that these guys are going to do that. I think like any new show, we’re feeling each other out at the beginning, especially last year. Maybe we played a little bit nicer than we do now. The last thing I think any of us want to hear afterwards is ‘Aw, man, I had a different take on that.'”

And Tocchet said he’s optimistic their chemistry and communication will help them keep improving.

“From last year to this year, what I love about this group, the panel, is that we’re all constantly communicating storylines over the summer. We’ve got our summer kind of fog out of hockey, you obviously don’t watch as much hockey in the summer or talk about it, but if there’s a storyline, Liam will give me a call, or I’ll talk to Biz or Anson. We all talk about hitting the story. And what I love about this group is we’re always thinking about ‘Hey, how do we get better from last year?’ The bar was set at wherever it was set, and we’re not complacent.”