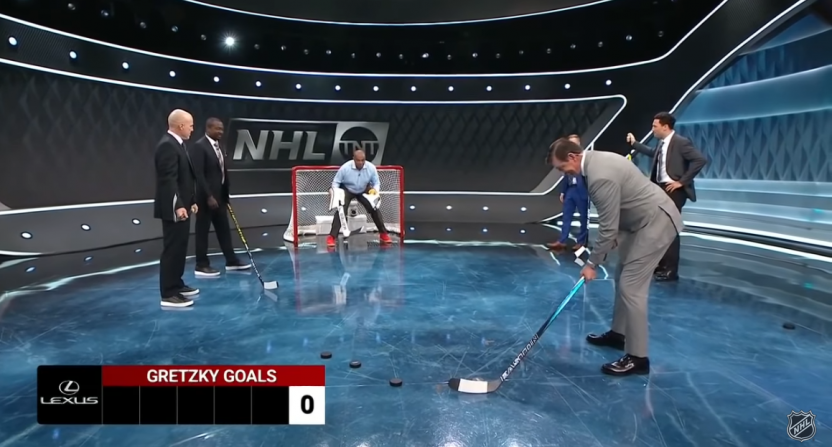 Turner Sports’ move to add Wayne Gretzky to their new NHL on TNT panel has been fascinating from a couple of perspectives. For one thing, Gretzky is maybe the most prominent personality in a North American sport to appear as a reasonably-regular commentator; there isn’t much dispute that he’s a top-five NHL player ever, and there’s a case he’s the greatest ever (but that particular debate’s beyond the purview of this piece), and players of that stature don’t usually wind up as regular analysts. (The closest North American comparison might be Magic Johnson, occasional ESPN analyst and someone who’s made some top-five ever rankings. But Gretzky’s status within his sport seems at least slightly ahead of Johnson.)

For a second thing (and maybe related to that first element), Gretzky (shown above shooting against friend Charles Barkley in an October segment) isn’t actually appearing on that panel every week. And that’s in contrast to the remaining cast of host Liam McHugh and analysts Anson Carter, Rick Tocchet, and Paul Bissonnette, generally there each time the camera light goes on. There have been a lot of cases so far where the panel has been the four of them and not Gretzky. And Jonathan Abrams wrote in a New York Times profile of the NHL on TNT show published Friday that Gretzky is “scheduled for a limited number of on-air appearances” and is “set to return to the show at the Winter Classic and be involved in the playoff run.” Still, even with that, Gretzky’s impact on this show has been felt, with Abrams’ piece titled “On TV, Wayne Gretzky Finds Himself as the Rookie.” And one interesting element of that came from Carter this week in a discussion with Julie Stewart-Binks for her Fubo Sports Network Drinks With Binks show (airing in full at 6:30 p.m. ET/PT Saturday):

"He's so witty," @NHL_On_TNT analyst @AnsonCarterLA tells us what would surprise fans about Wayne Gretzky. Anson told Gretz, "Your one-liners are insane, you're savage." Listen here to how the Great One put @BizNasty2point0 in a body bag ?? pic.twitter.com/4oTLY0DRML

Carter generally talks there about how funny Gretzky can be and how it is to bounce off of him, but the specific example he drops near the end of Gretzky chirping Bissonnette for a long response is great. “[Bissonnette] goes ‘I know, it was like a 20-second shift!’ and Gretz goes ‘Yeah, you should be used to those!'”

There are some other good examples of this level of chirping, and Gretzky both giving and taking it, in that NYT piece from Abrams. Here’s some of what he quotes Gretzky’s colleages saying about him:

“Gretzky came out, he’s the greatest player in the world but Gretzky got chirped first show,” McHugh said.

“Right away,” Bissonnette said. “Everyone licking their chops. Couldn’t wait.”

“That’s Wayne’s personality though,” Tocchet said. “I’ve coached with him, I played with him. Everyone’s scared of him. So, you’re in the locker room for a game and he’ll always wanted some guy to chirp him.”

…“He wants to provide entertainment for the hockey world,” Bissonnette said. “I think he feels indebted to it for what it’s provided him. I know if I was him, I’d probably be on a beach somewhere and you’d never see me.”

And really, that line from Bissonnette is why it’s not a widespread furor (in most quarters, anyway) that Gretzky isn’t on every NHL on TNT show. It’s rather incredible that they got a player of Gretzky’s caliber to show up for a studio show at all, much less every week, as most former players with that kind of success and wealth are not regularly showing up as TV analysts. (And it’s notable that Johnson’s time with ESPN’s NBA Countdown has generally gone similarly; there have been lots of periods where he was involved from time to time, but not on an every-week basis.) But it’s also interesting to hear about how well he seems to be fitting in with his studio colleagues despite not being there all the time, and about how he’s giving as well as taking on the chirping front. And it will certainly be interesting to see where this studio show goes once he returns on a more-regular basis around the Winter Classic and the playoff run.