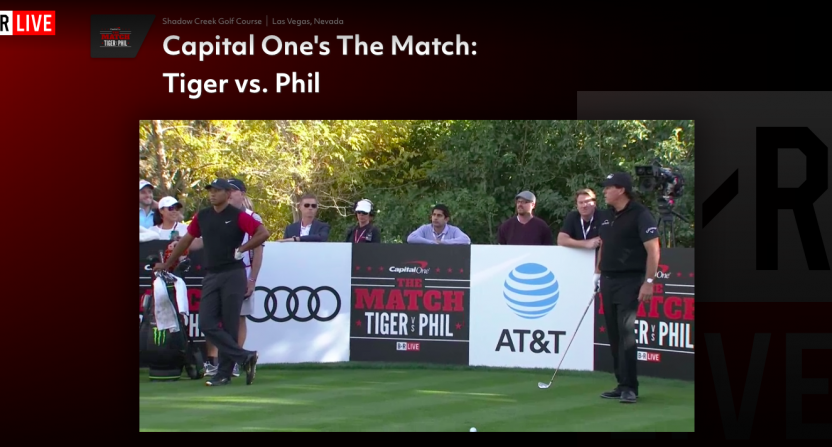 Friday, a winner-take-all match play event in Las Vegas for $9 million between Tiger Woods and Phil Mickelson had finally arrived. A long time in the making, the head-to-head showdown was originally announced as a production by Turner and distributed across a wide range of AT&T/Warner Media properties. Their stated plan was “live pay-per-view coverage of the event will be distributed through Turner’s B/R Live, the company’s new premium live sports streaming service, as well as “AT&T’s DIRECTV, AT&T U-verse, and will be offered to other on-demand platforms.”

The focus of the broadcast, however, was always the pay-per-view model. While it was originally thought that they’d charge $24.99 for the experience, the final price to order The Match on PPV was $19.99. Doing so would give viewers access to the live stream as well as the ability to watch a replay for 48 hours afterward. Even at that price, that’s still well below the market rate for most PPV events that TV viewers have become accustomed to viewing.

While the value and worth of paying to watch what’s essentially a friendly round of golf between buddies has been debated ever since the announcement, it was clear that a market existed and plenty of people plunked down their money for the right to watch Tiger vs. Phil on their TV, B/R Live, or on an app via their phone.

That’s what made it so weird when people starting showing up at B/R Live’s website or app and realizing they could just watch the entire event for free.

Somehow Bleacher Report Live is allowing anyone who goes to the website to watch Phil-Tiger for free.

Twitter started going after Rovell for bringing attention to what they assumed with some kind of loophole that was allowing people to watch the event without paying. They figured any minute now that Turner/Bleacher Report would notice that and remove access to the feed.

However, it turns out that the free feed wasn’t the mistake. It was the solution.

BREAKING: Source says Turner execs decided to give Phil-Tiger match away for free on B/R Live streaming platform (instead of $20 charge) when purchase function broke down to point where those who bought had trouble getting in.

What a distaster for Turner/Bleacher Report. It appears they’re just going to give the stream away for free. #TheMatch. There’s not an option to purchase it in the app.

No word yet on what it means for those paid $19.99 for access to the event and if they’ll receive a refund because anyone with an internet connection could end up watching. We’ve reached out to Turner and Bleacher Report for comment and will update with any response.

In the meantime, the B/R Live Support Twitterfeed is responding to unhappy customers who want a refund by letting them know how they can still watch the event.

Hi there,
To access Capital One’s The Match, please visit https://t.co/NfhRcEaHvx on your desktop or mobile device. If you have any other issues please DM us.
Thank you!

Turner had very big ideas for Tiger vs. Phil and what it could mean for the future of sports, special event broadcasting, and app viewing. After it was announced, Turner president David Levy told Sports Business Daily how the event might be a model for the future of the company. He said at the time that “this is a very good demonstration of how we think sports should be watched, viewed and discussed.”

Expect to see a lot of post-event discussion about what went wrong, what it means for the ability of B/R Live to monetize sporting events such as these, and how Turner and B/R Live can work to prevent such seemingly simple issues from disrupting their business model next time.