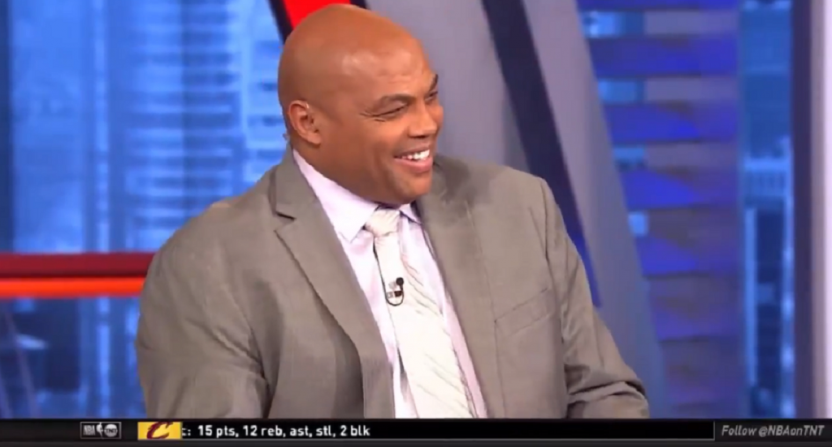 One of the things that people love most about Charles Barkley is that he tells it like it is and really doesn’t seem to care about who might be upset with what he says. Wednesday on TNT’s NBA Tip-Off Show before Pacers-Celtics, the people he likely offended just might be the executives at Turner Sports.

Inside the NBA host Ernie Johnson was running down the list of games airing Wednesday, with Pacers-Celtics followed by Rockets-Jazz on the TNT doubleheader and Pistons-Bucks on NBA TV. That brought a question from Shaquille O’Neal about the East’s #1 seed being relegated to NBA TV, to which Barkley said, “Actually, Shaq, it’s really the Pistons on NBA TV.” (Sorry, Detroit fans, but four games in this series is probably going to be three games too many for America.)

Finally, Barkley just said it straight for the audience about NBA TV’s role in the postseason: “That’s where we put the games we don’t care about.”

Charles Barkley on NBA TV "That's where we put the games we don't care about" pic.twitter.com/ldXFJBY1p1

Shaq asks “The Bucks on NBA TV? Aw, that’s disrespectful,” and Barkley responds “Actually, Shaq, it’s really the Pistons on NBA TV.” Shaq goes “Aw, you’re right,” and Ernie Johnson tries to get this back on track with “Pistons and Bucks on NBA TV” while chuckling. Kenny Smith chimes in with “What’s wrong with NBA TV? Nothing!” and Barkley responds “That’s where we put the games we don’t care about,” with Shaq adding “That’s real? I didn’t know that” while Johnson tries to finish with “about an hour from now.”

Barkley then says “Name me how many times LeBron played on NBA TV. He’s never been on NBA TV.” Smith responds “Players Only?”, Barkley says “That’s not the same” and even Johnson adds “Not during the playoffs.” Smith then says “LeBron’s not playing on NBA TV right now! I’ll tell you what, that’s where we should put him if he comes. Hey LeBron, the word is if you come, Charles is trying to put you on NBA TV.” Barkley then says “I need a favor, LeBron, I want you to be on TNT AND NBA TV. How about that?”

“Name me how many times LeBron has played on NBA TV” is maybe one of my favorite comments in the history of televised sports. Sure, it’s not going to boost the ratings for Bucks-Pistons and it may have induced a facepalm or two from the corner offices at Turner Sports… but it’s true!

During the playoffs in particular, NBA TV exists pretty much for the sole purpose of airing overflow playoff games that may not be at the top of everyone’s viewing picks. In fact, I’m willing to bet that NBA TV’s ratings would go up if it featured a live stream of Charles Barkley throwing shade at NBA TV.