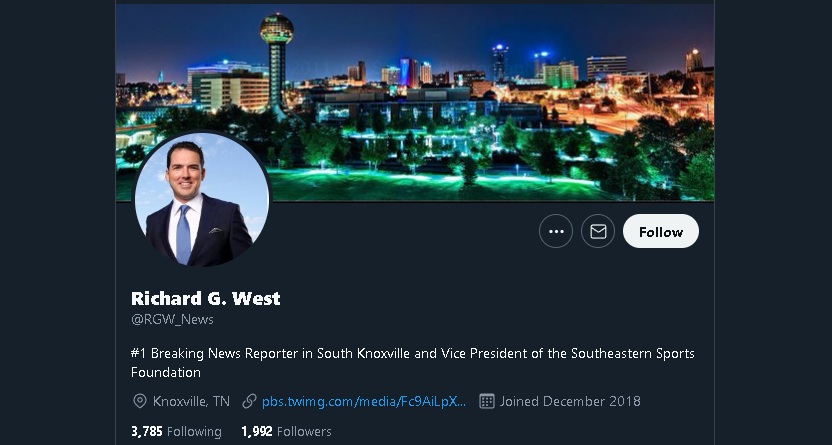 Sports Twitter accounts that just make up reports have long been around, from fake insiders through “Ballsack Sports.” A further development of that still comes from people pretending not to be a specific insider (for seeming purposes of gaining some “of course it’s legitimate!” comments) or a news outlet (for “it’s more out of frustration seeing, okay, this is what the world wants” purposes), but rather creating profiles that seemingly look like the kinds of local news reporters who do often break news, and then using those profiles to spread fake news.

One of the longest-running troll jobs there comes from “Richard G. West,”  who in 2019 created an entire story out of thin air about Colgate men’s basketball player Jordan Burns supposedly missing a flight and taking an Uber to a NCAA tournament game against Tennessee:

After the Colgate Basketball team arrived in Columbus, OH they noticed they left a player at the airport in New York.

Freshman Jordan Burns missed the charter flight and is now taking a Uber to Columbus to meet up with the team.

That completely inaccurate tweet remains up three and a half years later, and it was picked up and used as the basis for stories by CBS local news sites, including CBS New York, CBS Pittsburgh, and CBS Philadelphia. It also led to even Burns’ mom calling him and asking what was going on.

Well, fast forward three and a half years, and “West” is again in the “news,” this time for a series of completely inaccurate tweets about ESPN’s College GameDay (which will be at Tennessee Saturday ahead of the Florida Gators’ game against the Volunteers), plus that game in general.

Tennessee students have already began to get their spot behind the ESPN @CollegeGameDay stage in front of Ayres Hall.

It’s a Thursday morning for a 3:30 Saturday game. This is dedication. pic.twitter.com/5r4w5mGvDb

Billy Napier is having Florida practice today to try & get accustomed to the Neyland atmosphere.

He had all the mangers throw projectiles at the team such as golf balls & mustard bottles all while blaring Rocky Top across the PA.

ESPN @CollegeGameDay has announced the celebrity guest for the Florida/Tennessee game this Saturday.

Steve Spurrier, “the Head Ball Coach” and Johnson City, TN native will give his insights on this weekends matchups. pic.twitter.com/P1md71s6En

In order, that’s an old photo (from 2016), it does not appear that Napier is having managers throw golf balls at players (but it can be wise to look out for golf balls at Neyland Stadium), and no GameDay guest picker has yet been announced (sadly, it seems like it will not be Dolly Parton). So disregard those tweets, and anything else you see from “West.” But the more remarkable thing is that whoever’s behind this particular account is still doing this bit of tweeting fake news three years after the Burns scenario, and seemingly still getting a good bit of attention for it (as of 4 p.m. Eastern, the tweet about fans lining up had more than 1,100 likes, while the golf balls one had more than 2,000 likes and the Spurrier one was close to 2,000).

Of course, there are several things with the West account that make it clear this isn’t a serious person. In 2019, his bio link went to an unregistered website; the link is now only to a photo of a Tennessee player flipping double birds. A reverse image search reveals that the profile image is of Australian Sky News presenter Peter Stefanovic. (It seems to be from an old photo of him with fellow presenter Laura Jayes.)

That’s before you get to some of the supremely weird and wrong old tweets on that account, most of which didn’t get any traction:

Breaking News: After being turned down by Eddie Gran, Kirby Smart will now head to the Miami Dolphins as the Head Coach.

The FBI opens up immediate investigation into the AP Top 25 poll voters in suspicion of bribery from Duke Athletics.

The FBI wiretaps on Will Wade has also confirmed that he has been paying referee Anthony Jordan.

Anthony Jordan has been at the center of several controversial calls at the end of close games this season that went in LSU’s favor.

But it’s truly remarkable that “West” is continuing this bit three and a half years later, this time with a bunch of seeming “reports” on GameDay. And it seems to be working, with these tweets getting quite a bit of attention.