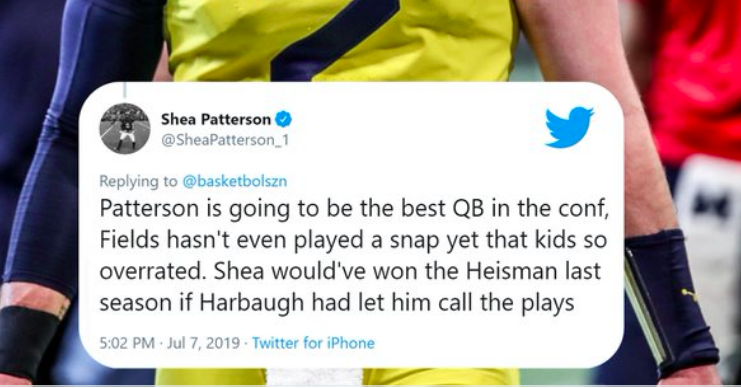 College football fandom is not subtle. Everyone takes everything personally and reacts very strongly, especially when it involves rivalries and upcoming opponents. The media culture demands that opinions are formed immediately and that your takes better be spicy or they’re not worth making.

All of which makes it prime ground for jokes to be misconstrued as serious stories, not to mention jokes that don’t make it very clear that they are, in fact, jokes.

We remembered this last week when a quote from Oregon head coach Mario Cristobal started circulating via the Twitter account College Football Quotes. It looked professional and appeared to include some very pointed barbs from Cristobal regarding the team’s season-opening opponent, the Auburn Tigers.

Oregon Head Coach Mario Cristobal was asked about the opener vs Auburn, & said that Auburn would be just another team in the PAC-12 and that they weren't worried about the matchup.

He also talked up his squad and claimed that his team was the fastest & strongest in the nation. pic.twitter.com/ZtgNAjDSY2

That’s bulletin board material if there’s ever been such a thing. Not only did Cristobal take a shot at Auburn but he also took a shot at the SEC at-large. He might as well have painted a giant target on his back.

The problem is that the quote is 100% bullshit.

Both Auburn and Oregon message boards blew up as you’d expect. However, when no one was able to corroborate the quote, and GoDucks.com reporter Rob Moseley refuted the validity of the quote, the Twitter account came clean that it was meant to be a joke, attempting to play it off as a silly farce that you were stupid to take seriously. Whether that’s a realistic assessment or the person behind the Twitter handle knew exactly what they were doing, it was a brief reminder that everyone should always attempt to corroborate random quotes or social media postings, whether you’re a fan, a content aggregator, or even just a casual observer.

That lesson seems to have been lost by the time Sunday rolled around.

Patterson referred to himself in 3rd person and threw shots at both Ohio State QB Justin Fields and Michigan HC Jim Harbaugh in a tweet response to a fan in a now-deleted tweet. pic.twitter.com/msdIba0Wix

The tweet appeared to be Shea mistakenly using his personal Twitter account instead of a presumed burner account to defend and praise himself. If true, it’s a major gaffe and the kind of thing he was going to get killed for on social media all season long. It had already been retweeted over 1,500 times by 10:00 p.m. EST.

But, as you can probably figure…it’s almost certainly also bullshit.

UPDATE: Shea Patterson confirmed as much in a tweet that refuted the validity of the response and noted that the underscore between his name and the 1 was a bit shaky.

In regards to the nonsense from earlier today…The calls and notifications really jammed me up on the front 9 ????️ pic.twitter.com/dXbjqQmpol

ORIGINAL: Joey Kaufman, Ohio State football beat writer at The Columbus Dispatch, noted that it was strange no one else caught the deleted tweet before CFQ posted it. That kind of thing always gets screenshotted by various people. This was also noted by mgoblog, who tried to remind people that it’s common knowledge the account is a parody (even if it’s poorly done).

Of course, none of that has stopped some Ohio State fans and other college football fans from pouncing on Patterson. It also doesn’t help that the College Football Quotes account is doubling-down on the initial tweet and playing along with those who want to believe the tweet because it taps into their preconceived notions. And it really doesn’t help that sites such as Barstool Sports and 12up ran with the “deleted tweet” and created their own content around it as if it was 100% valid. 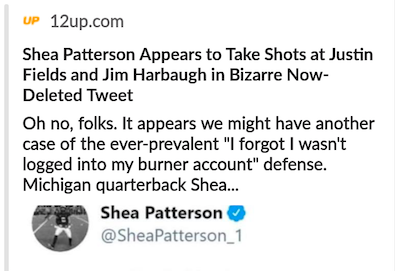 In a way, the College Football Quotes account is a damning indictment of the online sports content cycle. It knows full well that by the time anyone actually takes a moment to check whether or not it’s fake quotes are real, the outrage will already be halfway around the internet. Too many fans are conditioned to believe whatever they see on social media and too many content aggregators with shoddy editorial practices are conditioned to run with whatever seems to be getting traction without the need to doublecheck.

In another way, though, the College Football Quotes account is just a real dick who just enjoys trolling people who don’t realize they’re being trolled. Because apparently, they’ll never learn.